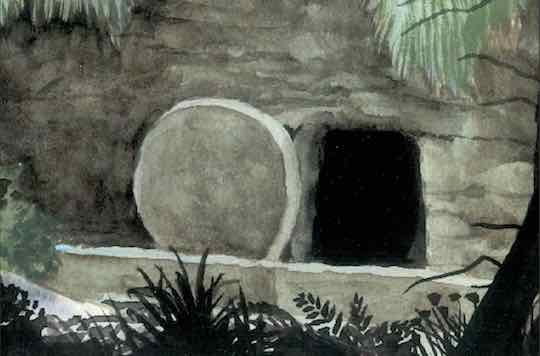 I have been re-reading NT Wright’s chapter on the “The Surprise of Resurrection” in Jesus: the final days, where he corrects some doubtful christian ideas about the resurrection, and offers reasons why we should regard the gospel accounts as basically historical.

The christian idea of resurrection was very distinctive and different from these views.

Resurrection was central and vital to christian belief

You could take resurrection out of Jewish belief and it would make little difference, but it was absolutely central in first century christianity. Many ethical, doctrinal and evangelistic teachings in the Epistles, and in Acts, were built on Jesus’ resurrection. So Paul could say (1 Corinthians 15) that without Jesus’ resurrection, christian faith is futile, and in Athens (Acts 17) his message focused so much on resurrection that his hearers thought he was speaking of two gods, Jesus and Anastasis (Greek for resurrection).

It seems to me that we have lost some of that emphasis today.

The Jews were familiar with the idea that a person (or their “angel”) could appear to grieving relatives after their death, but they didn’t use words like “resurrection” to describe these brief experiences. In contrast, the christian view of Jesus’ resurrection, right from the beginning, was that he had a physical body that could eat and be touched, but a transformed body that had the ability to appear, disappear and move through walls.

And so the christians believed that they too would be resurrected into God’s new age. They rarely described this as anything like going to heaven when we die, as most modern christians would do, but rather as living a bodily existence in a transformed world.

For the Jews, the Messiah was God’s chosen king who would conquer Israel’s enemies and restore Israel and Jerusalem as the premier nation on earth. He could not be defeated or die, and he certainly could never have suffered the shameful death of crucifixion. Apparently there were cases where Jews followed a Messianic claimant who was subsequently killed, and this led to them concluding that he couldn’t have been the Messiah, and instead they looked to someone else.

But many scholars believe that it was the disciples’ experience of seeing the risen Jesus, and their belief in his resurrection, that led to their belief that Jesus was Messiah, Lord, the divine son of God.

Contributing in the new creation

The Jews believed that God, through his Messiah, would begin a new age of shalom. The christians came to believe that not only did Jesus’ resurrection begin that new age, but Wright says:

“With the resurrection of Jesus, the early Christians believed not only that God had begun the long-awaited new creation, but that he had enlisted them, through the spirit of Jesus, as helpers within that project.”

This has huge implications for how we live as christians today (something I’ll come back to in another post).

But did it really happen?

How did belief in the resurrection come about? Were the disciples so overcome with grief that they imagined they saw him alive as a way subconsciously to deal with their grief and cognitive dissonance, and subsequently developed the confused and legendary stories of the visits to the empty tomb?

Wright offers a number of reasons to believe the core of the stories is historical.

At first sight, the stories of the empty tomb and Jesus’ appearances to his disciples appear contradictory. Who visited the tomb? Were the appearances in Jerusalem or Galilee? It is possible to harmonise the stories, but this resolution is not obvious or necessarily historically correct.

Wright refers to a 1946 meeting between two eminent philosophers, Ludwig Wittgenstein and Karl Popper, where Wittgenstein waved a fire poker around and then left the room. Several other well-known intellectuals, including Bertrand Russell, were present, but later none could agree on exactly what occurred. Everyone agrees with the basic facts, and that something dramatic happened, but the details are not at all clear, perhaps because the events happened so quickly and were so unexpected. It can be the same in police investigations and court cases, where sometimes conflicting accounts contain the same core of facts.

Wright suggests it is similar with the accounts of the resurrection. The core of the story is true, but the events were so confusing and unexpected that people’s memories were sometimes unreliable. EP Sanders came to a similar conclusion, saying the accounts seem like eye witnesses excitedly sharing their own experiences and perspectives.

So, Wright suggests, the core of the resurrection stories is historical, but some of the details have been confused.

Like many other historians, whether christian or not, Wright believes the empty tomb and the appearances are historical facts. Each one, he says, could be explained away, but both together form impressive evidence. Most alternative theories about the resurrection founder on these two facts.

The reports were early

The resurrection stories don’t look like later legends. Most scholars agree that the first christians were proclaiming the resurrection of Jesus from the very early days. But Wright also points out the lack of scriptural quotes in the resurrection narratives, in contrast to the many scriptural references in the accounts of the events leading up to Jesus’ crucifixion. He argues that this indicates that the accounts we have have retained their early form, without the sort of reflection that would lead to scriptural references, such as those found in Paul’s writings two decades after Jesus’ death.

The pivotal role of the women

It is well known that women were not regarded as credible witnesses in the first century, yet they are very prominent in the gospel accounts of the resurrection. If the stories were later legends, the women wouldn’t have been so prominent, and maybe wouldn’t even have been mention, as is the case with Paul’s reference in 1 Corinthians 15.

So again the stories look like they were very early, and not invented.

A legend would have been more predictable.

If Jesus’ followers, who were Jews, had reflected for years on their scriptures and the death and apparent resurrection of Jesus, Wright says, they would likely have talked of a figure “shining like a star”, not a very human person with a restored body who ate fish. Wright says:

“This kind of account is without precedent. No biblical text predicts that the resurrection will involve this kind of body.”

So did it really happen?

Wright is realistic. He has argued that: “The empty tomb and the meetings with Jesus are, I believe, solidly established as historical data.” and so he argues that the christian claim is the best explanation of those and the other facts. Jesus really was raised.

But he recognises that worldview will play an important part in deciding whether we will believe Jesus was really resurrected. However he believes a naturalistic worldview, which makes it very difficult to accept this explanation, should itself be challenged and asked to demonstrate its truth.

So where does this leave us christians?

1. We stand on solid ground

We can have confidence that the historical evidence for the resurrection is good. The main barrier to belief is not believing there is a God. But for those of us who think the evidence shows that there is a God and he sent Jesus, it seems quite appropriate that he would raise Jesus from death.

2. We have more to learn

Historians like NT Wright have a lot to teach us. Many christians would benefit from reading some more history.

If God is not just interested in saving us out of this world and into heaven, but is doing a work of restoration which he wants us to be involved in, then we need to join him. We have much work to do.