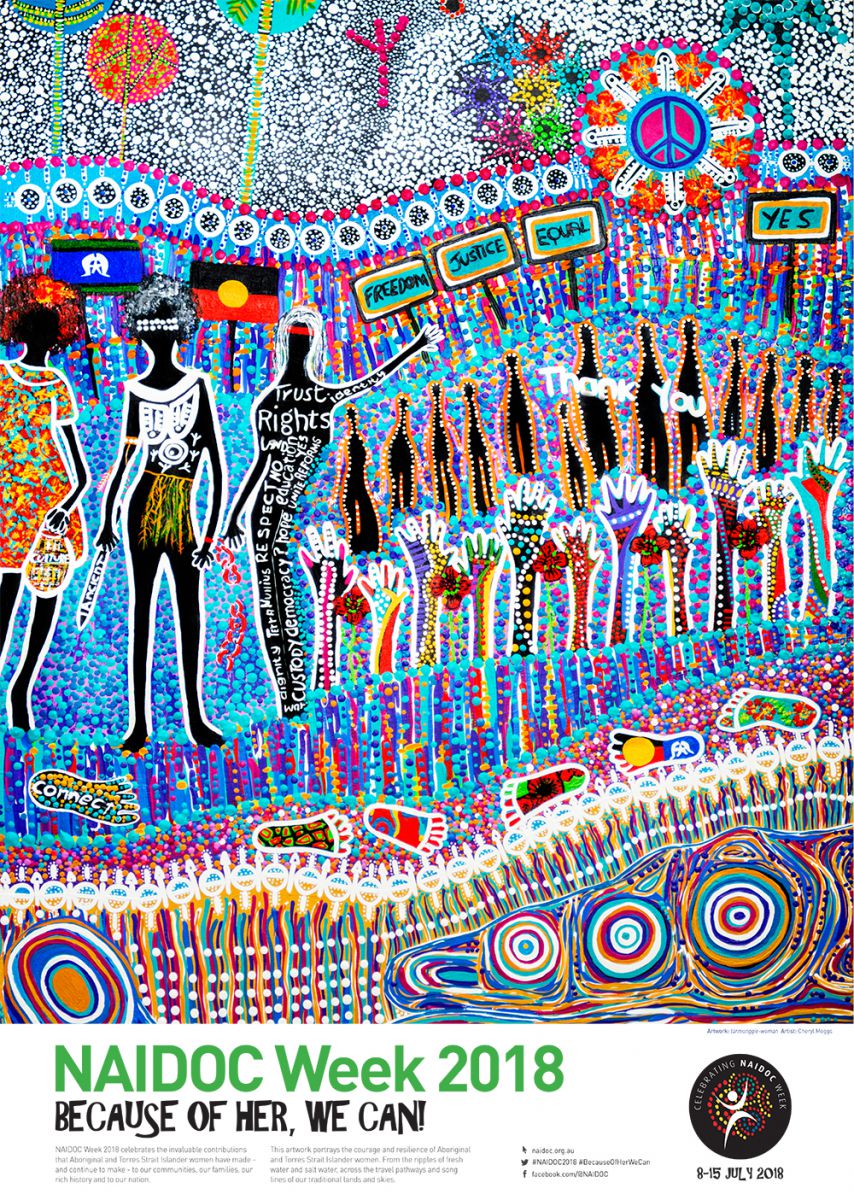 Like many countries colonised by European nations, Australia has a sorry two century history of poor treatment of our indigenous peoples, resulting in a significant reduction in their numbers and the quality of their lives. But they have survived, their numbers are building again, and many indigenous leaders are become more forthright in their pleas for greater recognition.

NAIDOC week, which is finishing as I write this (I wrote this Sunday night but only posted it Wednesday morning), has been set up as a celebration of the history, culture and achievements of Aboriginal and Torres Strait Islander peoples. It has been, in my view, a resounding success.

The theme this year was “Because of her, we can”, a celebration of Aboriginal and Torres Strait Islander women. It recognised that in many places it has been the women who have remained strong and preserved the culture, and given the example for many younger indigenous women to step out and be leaders.

We have participated in some aspect of NAIDOC week in the past, and again this year. But it seems that the week gained a great deal more exposure and recognition than previously, perhaps because the theme honouring women resonated with many people. 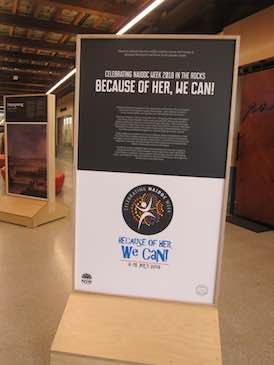 So there were news items, radio announcements, support from Commonwealth, State a Local governments and, it would seem, growing support from the general public. It seemed like there were mentions of NAIDOC Week everywhere.

For example, while visiting The Rocks area of Sydney for a Bastille Day carnival (of all things), we came across this exhibit (right) showcasing 10 outstanding aboriginal women.

Some indigenous women, despite some having their children taken from them by paternalistic governments and despite some being forcibly removed from their country and settled on missions and reserves, were courageous and persistent in caring for members of their communities, raising children in their culture, teaching them their stories, visiting those in prison (aboriginal people are over-represented in prison, often because of social inequality or active discrimination) and advocating for better treatment from governments.

Aboriginal people express their strong sense of kinship and respect for elders by calling respected elders Uncle or Aunty. But Shirley Smith became known as Mum Shirl after she began visiting her brother in prison, and saw the need to visit many other indigenous inmates who received few or no visitors.

When asked her relationship to the person she wanted to visit, she would simply say she was their mum, and eventually she was allowed access to all prisoners. She continued her support when prisoners were released, helping them and other indigenous people find shelter food and friendship. She helped single mums, alcoholics and the destitute, and in her life took in over 60 children, impoverishing herself in the process. She advocated for land rights and helped start the Aboriginal Legal Service and the Aboriginal Medical Service in Redfern.

Mum Shirl, who died 20 years ago, was awarded the MBE and AM in recognition of her selfless life and service.

Common Grace is a “movement of Australian Christians seeking to live, speak and act more graciously, more compassionately, more like Jesus in today’s world.” It focuses on 4 strands:

Common Grace has enthusiastically supported NAIDOC Week. Common Grace’s spokesperson on indigenous issues, Brooke Prentis, has led a daily tribute to individual indigenous christian women via video and a daily email mailout. We have appreciated these tributes, and attended a church service where Brooke spoke with her customary clarity and challenge to begin NAIDOC week last Sunday.

Over 2,000 Aboriginal people from many different nations and clans were forcibly removed from their land and sent to Barambah reserve or mission in Queensland, later named Cherbourg. To support the operation of Barambah, Aboriginal men and women were sent out to work on local farms, while their legitimate wages were “controlled” by the Government.

Aunty Jean was born into this environment. The Aboriginal church at Cherbourg was large, with many women leaders, and these women helped instil a strong faith in her. While still young, she became a missionary to Aboriginal people via the Australian Inland Mission, and has since served in many churches and indigenous communities.

In recent years it seems her focus has been on developing the next generation of Aboriginal Christian leaders and teling hard truths to white Australians who have tended to want to forget the murky past and move on without acknowledging the evils our people have committed against Aboriginal peoples, inviting white Australians to support Aboriginal Christian leaders and join our indigenous brothers and sisters in building God’s church in Australia.

Because of Aunty Jean Phillips, so many Aboriginal Christian women know they can be leaders and make a difference. See her speaking with Brooke Prentis on this Common Grace video.

It’s all about following Jesus

Jesus was a beacon in his time, challenging the sense of spiritual privilege he saw in the Jewish religious leaders of his day, and caring for the outcasts and victims of the status quo. He had empathy for women and counted them among his close associates, he hung out with tax collectors and he touched (and healed) sick people considered “unclean”, all unheard of in a rabbi.

Christianity is supposed to entail following him in these ways, though we don’t always get it right, and sometimes (sadly) we don’t even try. It is also a religion built fundamentally on repentance, forgiveness and restoration.

Indigenous people in Australia and many other countries have had their land taken off them by force, have been treated as less than human in the past, and have often been pushed to the margins, both literally and figuratively.

At the very least, white people owe them an apology, some special empathy, and respect, and I believe christians should follow Jesus and lead the way. More is needed of course, including (I believe) a treaty which recognises and acknowledges the past and lays a foundation for a better future.

Aboriginal christians want non-indigenous christians to walk with them on a journey to reconciliation and restoration, and for their potential to offer a deep spirituality to the Australian church. They very graciously are willing to forgive the sins of the past, in which the christian church was often complicit, even if their intentions were often good according to the ethics of the time.

We Aussie christians have a way to go to meet them halfway, but I believe it will happen, and is beginning to happen. It will be a blessing for both groups.

Not just in Australia

I know little of the situation in USA, Canada, New Zealand and other colonised countries, but I can only hope that christians of good will are pursuing justice and reconciliation with their indigenous peoples. I think maybe some of those countries are way ahead of us here in Australia, but at least we are on the way.

Graphic: 2018 National NAIDOC Poster by Cheryl Moggs, a proud descendant of the Bigambul people of Goondiwindi, Bungunya and Toobeah regions in South West Queensland, and used by permission of NAIDOC. You can see the graphic full size just by clicking on it.

« How many christian denominations? Who cares? And why do they care?
Urban tribes and the church »