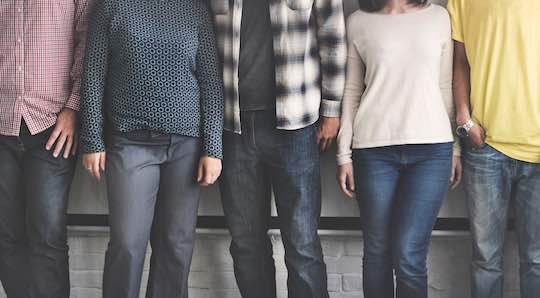 We’ve just come back from a short holiday in Melbourne, Australia’s second largest city. We stayed in South Yarra, an inner urban and somewhat hip location which is noticeably different to the suburb where we live in Sydney.

The obvious differences start with the dense inner urban environment of high-rise apartments and offices, the streetscapes of trendy clothing shops, cafes, restaurants, bars and coffee shops, and the footpaths busy with mostly young professionals, hurrying to and from work, meeting up for drinks and meals, or buying food at the local markets.

And there are not many churches for all these people, because, fairly obviously, few of them would be interested. We attended a nearby church that aims to “reach a post-church generation with real encounters with God” and while the service was informal and lively and the congregation was young and included some creatives, there weren’t many South Yarra hipsters there.

The whole experience made me ponder again how the christian faith might be meaningful to these inner urban professionals, and how the church might need to adapt if it wants to be alive in the next generation.

My friend Dr Martin Bragger, a retired minister who has studied these things, says our modern cities are a “kaleidoscope world” of different pagan urban tribes, each one living in its own parallel universe.

So the young South Yarra professionals are just one tribe alien to the church. There are many others.

I want to focus here on young educated professionals who are part of Generation Z (or maybe the tail end of Generation Y), whether urban or suburban.

And I want to ask:

Getting to know the young and educated

My wife and I spend a lot of time with educated suburban teens and young adults. It is fair to say that they differ a lot from our own generation:

Barriers between young urban pagans and the church

A lot of christian belief is difficult for educated non-believers to swallow. If they end up in a church that teaches 6-day creationism, that God did indeed order the genocide of the Canaanites, that Jesus is the only way to God, that hell is a real place of punishment forever, that women and gays are not as welcome as straight men, that miracles of healing are available today, or that Jesus really rose from the dead despite its (in their eyes) impossibility, the barriers are much higher, and long and serious discussion may be required to help them over these barriers. (I say all this without implying any particular answer to each of those dilemmas.)

But discussion with a few people in this demographic indicates that doctrinal teachings are likely not the major problems the organised church presents for them. When asked, they nominated:

What might a young urban pagan think of church services?

But even if these barriers were overcome and an educated young urban pagan entered a church, there are still barriers.

On a recent Sunday morning we drove past a church very familiar to us, and I commented light-heartedly: “What arcane rituals are going on inside those walls?” How would a young educated non-religious person think of what most christians are doing in “church”?

While walking and observing in South Yarra, I couldn’t help thinking of the cultural barriers between the people I saw and the arcane rituals of most churches, and I could only think that the two worlds might never intersect.

For all these reasons, and more, I find it difficult imagining many educated young urbanites feeling like church has anything to offer. Of course, by the grace of God, some still do, but not enough to sustain the church of the future, in western countries at least.

What might a young urban pagan look for in a church?

We asked the same group what they wanted in a church, what would help them believe and mature in that belief, and they nominated two basic things:

They wanted to feel that their questions were welcome, even when questioning basic christian teachings. That there was no barrier or stigma to expressing doubt about received answers because difficult questions were seen as the way to learn and grow. They saw exposure to diverse viewpoints as important in learning truth.

And they wanted honest and well-based answers. Too often churches give answers that conform to their dogma, but are hard to respect because historical, scientific or other scholarship doesn’t support the church’s answers, or the answers don’t gel with what most of us know about life, the world or God.

An example is the Canaanite genocide apparently commanded by God in the Old Testament and recorded in the book of Joshua. More conservative christians try to justify the commands attributed to God, but educated younger christians think it is blasphemous to think a good God would command such a thing, the archaeological evidence makes the Joshua account problematic, and anyway, Joshua tells two different stories, with the genocide appearing to be exaggeration.

Conservative christians can tend to gloss over the problems with their view in their determination to protect their doctrine of an inerrant Bible, but modern young adults tend to want to question this approach and resent having their questions shut down or answered inadequately.

The growth of social media indicates that generation Z values community and keeping in touch, even if older generations sometimes think social media provide only shallow communication. So it is no surprise to find that this generation tends to value the community side of christianity over passively sitting in church, or even actively worshiping. Many of them learn and grow in their faith most through discussion and learning with friends.

Photo by rawpixel.com from Pexels