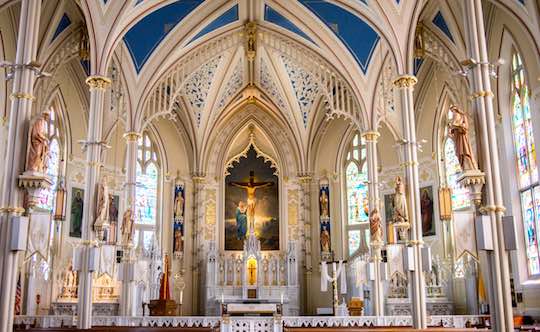 Almost 6 years ago I posted on How many christian denominations worldwide. I had been asked this question by an internet friend (not a christian believer) who was tired of hearing unsupported claims.

It has become my most visited and most commented page, accounting for almost half the visitors to this site.

I can’t help wondering why the interest in such a subject.

Two different authoritative sources have estimated that there are more than 40,000 christian “denominations in the world today. A “denomination” is defined as “an organised christian group within a country”

What the critics say ….

Most critics want to discredit christianity by pointing to so many disagreements among christians. It is a curious fact that I have seen many on their blogs quote my page as their source, and they say something quite different to what my page and the sources say.

Their arguments boil down to these three:

I’m not a great fan of the modern western church and would be more likely to criticise it than defend it. But do these three arguments have merit?

Because these “denominations” are defined by being separate organisations, they are no more an indication of different beliefs than the existence of 40,000 football teams would be evidence of that many different sets of football rules.

Any argument needs to be based on facts, but I’ve never seen any facts on the extent of different beliefs among christians, certainly they are never quoted by the critics I have seen.

An argument against the Bible?

I think this argument has a point, but overstates it.

Yes, if the Bible was clearly words directly from God, you might expect them to be clear and unambiguous. But there are several problems with this:

So there may be some superficial argument here against believing the Bible is less that a perfect book spoken out by God. But there are many more obvious ways to argue that – see for example Should christians accept everything in the Old Testament as truly from God?

An argument against God?

To make an argument against God, I think you’d have to show ….

I’ve never seen anyone actually present an argument like that, thoroughly and logically and offer evidence, though I suppose it must have been done somewhere. But it is noteworthy that most critics I have seen just jump from 40,000 organisations to 40,000 beliefs, and then assume that must be bad without ever making a decent argument.

Christians quarrel too much

This is a much easier argument to run. It is difficult to disagree that christians often argue with each other about what seems like trivial differences.

The problem, I think, isn’t the differences. Diversity is good, certainly on non-core matters. Who cares if you think the bread and wine becomes Jesus’ actual flesh and blood whereas I think that it remains simply bread and wine? It is quite possible for us to both participate in the ritual without worrying about what the other believes.

And quite possible to get on with the job of loving our neighbours as ourselves without even discussing our beliefs on this matter (and many others).

The problem is quarrelling.

You can disagree with me if you like, but let’s not be quarrelsome. Paul says in Romans 14 that we should avoid quarrelling with others and let God sort them out. We can express our views, but avoid being divisive.

The critic doth protest too much, methinks

In the end, the facts don’t bear the weight being placed on them and the argument has superficial attraction but little force.

The church can and should be criticised for many things, including quarrelsome behaviour and petty argumentation. But 40,000+ organised christian groups within a country are hardly the evidence that it is often claimed to be.

There are bigger fish to fry, as Salmon Rushdie should have said. A recent film gets it right – For The Love of God – How the church is better and worse than you ever imagined. A documentary film in production on the influence of Christianity on the West.

Photo by Brandon Morgan on Unsplash

« Have we really fallen this far?
"Because of her, we can" »