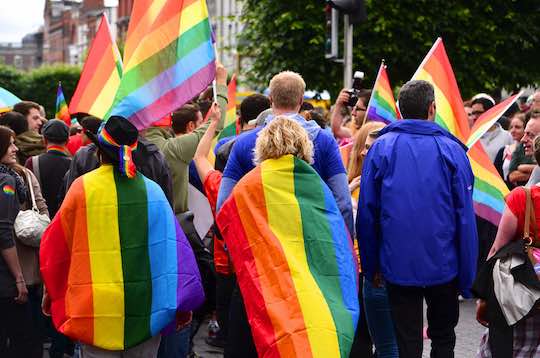 This has been perhaps the most difficult post I have written.

I’ve avoided writing about this issue because it is so divisive, and because I wasn’t sure I had anything worthwhile to say.

But while I don’t pretend to have a solution to the argument between the traditionalists and the progressives, I can’t help feeling that there should be some things christians of goodwill from both sides can agree on, and which might ease the tensions a little.

There is also the issue of how the secular world sees christians – surveys show that the perceived anti-gay emphasis of christians is a major barrier to non-believers ever seriously considering the claims of christianity.

Is it really this important?

Outsiders might sometimes wonder if being anti-gay is the core of christianity. But the subject is only raised in a handful of passages in the Bible, far less than, say, the dangers of wealth, materialism and greed. Yet how many churches, and how many christians, devote more attention to greed than they do to homosexuality?

Whatever shade of theology we hold, from conservative to liberal, sexual ethics is not the centre of our faith. In evangelical terms, it is “not a salvation issue”, nor is it at the core of the message of the kingdom of God that Jesus taught.

Allowing this to be seen as such a big issue means we are not saying what most needs to be said.

We have much to repent of

Christians and churches have an unfortunate (to say the least!) history of persecution of LGBTI people. We have not been alone in this – many cultures and many societies have behaved badly towards gays, but we haven’t shown the love that Jesus commanded us to show even to our enemies, let alone those we have no reason to regard as enemies.

People who are at least nominal christians, maybe even “born again” christians, have bashed gays, even murdered them, discriminated against them and hated them. There can be no justification for this, and it needs to be repented of and apologised for, if it hasn’t already. The discrimination and lack of love must stop.

I remember as long ago as the 1970s, a friend of mine who was a University chaplain for a conservative evangelical denomination, was arguing that it was homosexual actions that the Bible spoke against, not the orientation. We know now that many, perhaps most, of those who identify as LGBTI had no choice in this orientation, so it is sad and reprehensible that some christians are still saying LGBTI orientation is a sin.

Christians should welcome an end to all discrimination on the basis of gender and sexuality, except where there may be clear social reasons – if there are actually any such cases. We should welcome LGBTI christians into our churches, our fellowship and our friendships, whether we approve of them or not, just as we welcome anyone else. We all need to experience the love of God.

Minding our own business

In 1 Corinthians 5:12, speaking of a different aspect of sexual ethics, Paul asks the rhetorical question: “What business is it of mine to judge those outside the church?” I think this principle is appropriate for the question of gay marriage.

Whatever christians think about gay marriage, what other people do with their lives isn’t our business. We don’t try to make laws against pride, promiscuity, jealousy or gluttony, so I cannot see that opposing gay marriage is something any of us should be doing.

I think secular gays can go too far here too. Ministers and churches shouldn’t be required to perform gay weddings if they feel it is against their conscience.

Live and let live seems to be a good motto for both sides.

The passages commonly quoted to condemn homosexual activity should, it is argued by pro-gay christians, be interpreted differently. Paul was speaking against coercive and unloving gay relationships (which were common in the Roman Empire), it is said, and didn’t address loving and committed gay relationships.

I have difficulties with this. It is true that male citizens of the Empire commonly had homosexual partners among their slaves, a practice that we would all condemn because of the inequality and lack of choice in the relationship. But the scriptures were written out of very traditional and patriarchal societies, and I am doubtful that the writers REALLY meant, or would ever supported, what the pro-gay activists try to make them say. The alleged silence of the New Testament writers on loving gay relationships cannot reasonably be interpreted as approval.

It is understandable that gay christians would want to find scriptural support for what is deeply important for them, but an extremely doubtful re-interpretation of scripture doesn’t seem to be the best way forwards.

Some of these departures from a literal understanding are said to be justified by the idea that Paul’s thoughts on women’s clothing and hair styles were a cultural matter that don’t apply today. But how do we know that some of the things held dear by conservative christians (such as the role of women or our attitude to homosexuality) do not similarly have cultural or historical aspects?

Consistency in Biblical interpretation is difficult, but I believe there is a better way to address this issue.

So we have reached an impasse. Gay christians refuse to accept no for an answer, but that is the only answer conservative christians are willing to give. Each side speaks confidently of God being on their side, but they both can’t be right. I suspect they are both at least partly wrong.

Jesus promised that the Holy Spirit would guide us into all truth (John 16:13). Instead of arguing vehemently from the Greek about what Paul may or may not have meant, and being implacably opposed to any other way of looking at things, we need to know from God what he wants for today. If everything in the scriptures doesn’t necessarily apply to us today, we need the Spirit’s guidance on whether and how much these teachings on homosexuality should be applied.

It will be said that this is playing with the Word of God, but as we have seen, both sides are already doing that, and coming to opposite conclusions. I would much rather trust the answer when the worldwide church is praying honestly for God’s wisdom on this, than trust people with preconceived opinions stretching to make the Bible say what they want.

I have seen one church go through a process like this. For about two months they met, prayed, read the scriptures and discussed, all in an atmosphere that was accepting and non-confrontational. Both sides of the debate were expressed. There was no argument, as far as I am aware, for I only attended once when visiting. In the end the church decided to affirm LGBTI people as made in the image of God. I think they were probably always going to come to that conclusion, but I think they modelled a good process that the rest of us could learn from.

What’s a poor boy to do?

I can’t honestly feel that I can endorse either the strong resistance of the conservatives or the affirming way of the progressives, at the moment at least.

But what are the alternatives?

Praying with those we disagree with and asking the Holy Spirit to reveal God’s guidance on this matter will not be a fast process, and realistically, most people and churches are probably not going to be willing to do it just yet – too many are too far down their particular track. And gay christians are impatient for change.

Like I said at the start, I don’t have any answers, just a wish to see a more peaceful approach. Any ideas I’ve had so far don’t seem to be satisfactory, and I outline them here with some trepidation. Some could be seen as insulting to LGBTI people, while others could be seen by some as not respecting scripture, but we need to explore ideas.

I can’t say I’m really happy with any of this. I feel like I’m setting myself up to be criticised by both sides in this debate. The church is divided on the issue, and diverging more than converging, it seems. We need to know what God thinks, not what our traditions or our wishes say.

So I am committed to being open-minded, praying and asking the Holy Spirit to convince not only me, but a growing number of christians. And I am committed to be loving as much as I can. I cannot at present feel happy to come to a conclusion myself, and especially not actively support either side until I feel confident that God is leading his people in a clear way.

I just have no idea how he might lead us, but I’m waiting to see evidence of his work in the worldwide church.

« It was kind of amusing and revealing at the same time
Colonialism, war and selective memory »