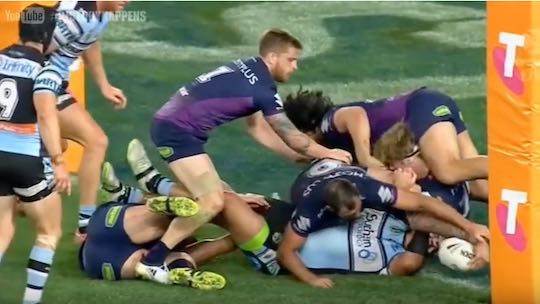 The football team I follow has just won its first premiership after 50 years in the competition. There has been much rejoicing!

But this isn’t, primarily, a post about football, but about people who make mistakes, and the possibilities our culture allows for redemption and restoration.

Last Sunday, the team I follow, the Cronulla Sharks, won their first ever premiership in a tough and frenetic game. Clearly the better team on the day, and leading for most of the game, they found themselves with about a quarter of an hour remaining, behind on the scoreboard and facing defeat. Their opponents, the Melbourne Storm, have a reputation as an extremely disciplined side, very difficult to score against when they get in front.

But the Sharks managed to score the winning try (note to US readers – Rugby League is a running game, with some similarities to American football, and a try is similar to a touchdown, except the player has to ground the ball, not just get it over the line) when one of the biggest men on the field managed to drive through 4 opponents, twist and get the ball down.

Try scorer Andrew Fifita was a hero to Sharks supporters, but a villain to many in Rugby League and in the press. Here’s the story …..

Andrew grew up and played junior football in western Sydney. His father left the family when Andrew was 6, and he started hanging around with people who were leading him into trouble. In a court appearance, a judge warned that unless he left Sydney, he would likely end up in gaol, so he finished his schooling in a country town. He subsequently returned to Sydney before beginning his first grade football career in 2010 with the Wests Tigers team. In 2012 he began playing with the Sharks.

He has been a controversial figure. Big, fast for his size, and skilful, Fifita has been a dominant player for the last few years, but has also been known to commit indiscretions on the field, giving away unnecessary penalties. At times his happy-go-lucky nature appears not to take the game seriously enough, but he seems popular with team mates. Off the field, he has been known to speak inadvisably.

Several off-the-field incidents soured his reputation. He was involved in a road rage incident in 2014, and in 2015 he and his footballing brother were suspended and fined for threatening a referee at a junior League match. After this he apparently attempted suicide and was subsequently treated for depression and a personality disorder, and this may help explain his enigmatic character.

Fifita has been at his best in 2016, in spite of what has become his most controversial action.

Back in 2012, Kieran Loveridge, an 18 year old from western Sydney, visited Sydney’s nightlife centre, Kings Cross, apparently drank too much, and went out and deliberately assaulted several random pedestrians without any provocation. One of these, 18 year old Thomas Kelly, struck his head as he fell after he was punched,and subsequently died. Kieran accepted a manslaughter charge and was jailed for more than 10 years. He became known in the media as a “one punch killer” or “one punch coward”.

Loveridge has since assaulted a fellow prisoner, and his cousin was jailed around the same time as Kieran for a stabbing murder. Clearly Kieran Loveridge has been a violent person, and appears to have been part of a violent culture.

It turns out that Fifita and Loveridge were friends, and Fifita coached a football team which included Loveridge at the time when he was charged and convicted.

Fifita kept in contact with Loveridge, visiting him at least once in gaol, and ringing him many times. For a few games he wore an armband during games with the letters FKL on it – which he said stood for “For Kieran Loveridge”. When challenged about it, Fifita said he did it to let Kieran know he wasn’t forgotten.

It was revealed that the police had spoken to Fifita about “consorting” with known criminals, which is an offence. Apparently Loveridge was believed to have connections with an outlaw motor cycle gang, and that was enough to justify the warning. The Rugby League said he would have to face an Integrity Commission hearing after the season was over.

The tabloid press had a field day (here, here and here), some calling for Fifita to be suspended by the Rugby League, and many commentators condemning his support for a notorious “one-punch killer”. Fifita responded by saying “I do not excuse what he has done – but I can’t turn my back on a mate”. At least two commentators supported him (here and here).

Fifita was said to be under increased pressure in the final matches of the season, and his club didn’t allow him to speak to the press. He responded with a match-winning performance in the grand final, running for a greater distance and breaking more tackles than any other player on the field, as well as scoring the winning try. But it still wasn’t enough for his media critics, and when the Australian squad was chosen for an upcoming series of matches, Fifita wasn’t considered (pending the outcome of the Integrity Commission hearing) although he was undoubtedly good enough.

All this raises a few questions in my mind:

Kieran Loveridge initiated senseless violence that left a young man dead. His 10 year sentence is surely no more than he deserved – it was a terrible, senseless crime. But that isn’t the whole story.

He was 18 years old, when it is known that many boys haven’t yet developed those parts of their brains that exercise discretion. He is not the first young Aussie male to get drunk, or to punch someone. But his punch had far worse consequences than most.

And in ten years, he will presumably be released from gaol and will have to begin his life again. Will he still be stigmatised as the one-punch killer? Will he be able to head into life without that albatross around his neck? Will he have matured and so choose a different way? Or will he spiral into a life of crime and violence?

I can’t think that his future is helped by the way some newspapers have labelled him, especially since we can wonder whether they adopt this stance as a way of selling more papers. If we want to see him rehabilitated, the labelling has to stop sometime.

Jesus told us that God judges anger just as he judges murder (Matthew 5:21-22), and we christians need to take notice of his teachings when we make judgments about others. And of course, we are warned about judging others too harshly (Luke 6:37-38).

Is Andrew wrong to care for his friend? It is hard to think so, despite what some of the tabloid press has said.

The police are presumably justified in warning him about who he associates with, and the Rugby League is justified in examining the matter, but should Fifita be praised rather than condemned?

While Andrew is an enigma, he is reportedly a sincere Catholic and a good father to two daughters. He has both Australian Aboriginal and Tongan heritage, and both of these cultures place great value on family, so if Andrew sees Kieran as part of a wider "family", is that wrong? Could it possibly give Loveridge greater chances of being rehabilitated?

I don’t know much about both men, and I certainly don’t know the answers to all these questions.

But I think they are worth asking.