I have been researching family history for several years now, and have recently had my DNA tested to identify possible genetic matches – people who are related to me, perhaps as distant as 5th cousins – to try to make some breakthroughs in a difficult search.

This has opened up an interesting new world for me, with some interesting implications for christians.

What it is and how it works (very briefly!) 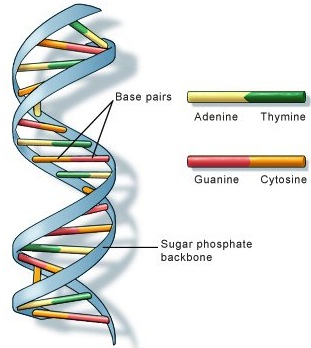 DNA is a complex organic molecule shaped somewhat like a spiralling ladder (see diagram) which stores enormous amounts of information (almost 3 billion “base pairs”). DNA controls how our body grows, by providing code to make the different protein molecules which make up different parts of the body. There is DNA in every cell in our bodies, apart from red blood cells, and “cornified” (i.e. “dead”) hair, nails and skin cells.

Our 23 chromosomes are long strands of DNA, each comprising many genes. The 23rd chromosome determines gender. The mother will always pass on an X chromosome, but the father may pass on either and or a Y – XX makes a female and XY makes a male. Cells also contain mitochondrial DNA, which is found in a different part of the cell. It is passed on by the mother to all children, but males do not pass their mitochondrial DNA to their children.

When a child is conceived, they receive half their DNA from each parent, a process with enough randomness to ensure that siblings don’t have the same DNA unless they are identical twins.

Mutations and random variations occur to varying degrees in the different parts of DNA.

Almost all of our DNA is exactly the same, but a small amount varies. Each of us inherits long segments of DNA from each parent, shorter segments from each grandparent, etc. So the length of segments two people have in common is an indication of possible relationship – long identical segments indicate the two people share a common ancestor only a few generations back, but short identical segments indicate any common ancestor is likely many centuries or even millennia back.

Autosomal (chromosomes 1-22), X, Y and mitochondrial DNA testing can also indicate in which part of the world a person’s ancestors lived, by comparing that person’s DNA with characteristic DNA from different areas.

DNA testing can, of course, be used it identify disputed paternity, and allow adoptees to identify biological parents.

The same principles can be used to identify ancient ancestry, and thus identify lines of human evolution and migration. For example, extraction of DNA from ancient skeletons has shown that:

The fact that understanding DNA has enabled breakthroughs in medical science, forensics and genealogy/paternity means that the science of DNA is well tested. It is hard to see how it can be wrong, though the calculation of some dates is sometimes problematic because the rates of mutations and change are not necessarily always constant.

This provides some interesting insights.

If DNA similarities can demonstrate connections between our relatives, the same principles hold true for more distant relatives among animals. Thus DNA becomes a significant support for evolutionary science and the concept of common descent. Francis Collins says: “I would say we are as solid in claiming the truth of evolution as we are in claiming the truth of the germ theory.”

Obviously this is difficult for some christians, but I don’t believe it needs to be. Just as the discoveries of Copernicus and others led to us seeing the earth-centred cosmology of the Old Testament as pictorial, so I believe we can allow the discoveries of DNA to amend interpretations of Biblical statements on species and the process and timing of creation.

But accepting the DNA evidence for evolution in turn leads to other “problems”. How do we understand Adam and Eve, original sin and the Fall? When did “human” life begin?

I think we have to think again (see Why the fuss about evolution?) about all these doctrines. Some may be retained, but within a slightly revised understanding, but perhaps they all will need to be revised.

Better, I believe, is to see the Bible and nature as two different revelations of God, both meriting scientific, linguistic and cultural study, and both requiring interpretation and understanding which may be subject to change.

But DNA isn’t only a challenge to christians – it also challenges non-believers.

Making DNA in the first place

Proteins are complex molecules which make up about a third of most cells, and perform many important functions. Each protein is comprised of somewhere between a hundred and several thousand ‘amino acids’, each of which may be composed of about a dozen or more of mainly carbon, hydrogen, oxygen and nitrogen atoms. There are 20 different amino acids, half of which humans can make themselves, and half of which are obtained from food. The sequence of amino acids in a protein determine what function it will perform.

When a cell prepares to divide, the DNA splits into two strands, each of which is used to build a second strand and thus a second cell. Only part of the whole DNA sequence is relevant for each type of cell, and that sequence of information determines the characteristics of that cell, say hair colour if it is a hair cell. Enzymes (one type of protein) read the information in a DNA molecule and copy it into messenger ribonucleic acid, or mRNA. The code carried by the mRNA is used to construct the sequence of amino acids in the required protein molecule. Each group of three bases in the DNA sequence specifies a particular amino acid.

For life to begin in the first place (abiogenesis), this complex process had to evolve, something that is extremely difficult to believe happened by chance. Science has not yet established how it happened, despite a lot of attention being given to this research. Many christians believe this is an indication of when God intervened in the natural process to create life.

However christian biologists, such as those at Biologos, caution against this conclusion. It seems better to say that God created the universe in such a way that this evolution of life from non-life could occur “naturally”.

Nevertheless, the complexity of DNA and the difficulty of explaining how life with such complexity arose is a challenge to non-believers.

The information contained in DNA

DNA stores an enormous amount of information, so much that it has been calculated that all the information in the world could be stored on a truckload of DNA. Information theory is the science and mathematics of information. It has been well developed and utilised in modern computing, and has been shown to be valid in considering DNA.

It is argued that DNA is a code, a language, that encodes information, just like computer code, that such information code has never occurred naturally, but always requires design. Therefore, it is argued, DNA points to a designer.

Non-believers disagree of course. They say that DNA isn’t a code, it is nothing like computer code, it is a molecule.

I must say I find the arguments on both sides a little self-serving – exactly what you’d expect each side to say. I don’t really know how to evaluate them. And I note that Biologos counsels against assuming too much about genetic code and its origins.

I think we can conclude that the information contained in DNA presents a challenge to naturalism, and leave at that.

DNA is fundamental to all life. As christians we can see it as part of the way God has set up the universe. So we should be willing and interested to learn what it tells us about life. I think what we learn is exciting.

I’ve written up some slightly more detailed information on DNA and evolution, including references you may like to check out:

« Why did Jesus have to die?
A "revelation of God’s true nature"? »