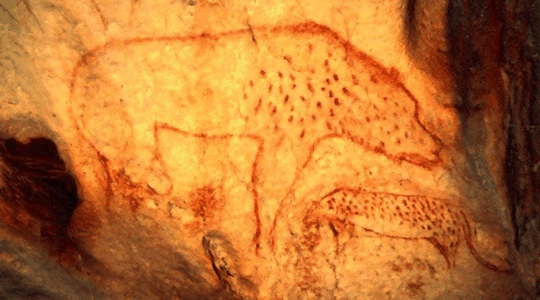 Last post (Why the fuss about evolution?) we looked at how the science of biological evolution impacts on christianity. We saw that the DNA evidence indicates that there was never a single Adam and Eve style couple as the ancestors of the human race.

This then raises the interesting question – who were the first human beings?

The evolution of hominids and humans

Further evolution led to many species, all with the Latin name homo, meaning human. These other species spread from Africa to other parts of the globe, but subsequently died out, as shown on this diagram. (This diagram follows the favoured Out of Africa model of human origins. A less favoured Multiregional Continuity Model model suggests greater connections between the various species.) 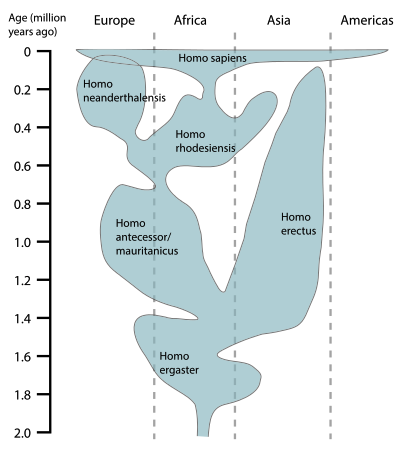 But christians believe that human-ness is about more than biology.

Are humans different to animals?

Naturalism is the view that the natural world is all there is. Most atheists and many scientists would be naturalists.

If naturalism is true, humans are merely physical, and physical processes control everything, including in our brains. Consciousness is a mystery, something that occurs in our brain, but there is no “us” apart from our brain and its processes. This makes it difficult to see how we can have free will and make genuine choices, including moral choices, because there is nothing to change the physical processes going on in our brains – no “us” to intervene and make any different choice than the one our brains will inevitably make.

This is a common view among neuroscientists, but is contradicted by our common human experience, where it seems that we are real conscious beings, able to make ethical and other choices and be held responsible for them. In fact, psychologists tell us that it would be next to impossible for us to live as humans if we didn’t believe our self is real and we are capable of making moral choices.

Christians generally, along with most people, believe humans are more than smart animals, and our laws (e.g the UN Declaration of Human Rights) reflect this.

But this then leads to the question, how are humans different?

While christians believe that humans are more than simply intelligent animals, and most believe a key is that humans are created in “the image of God”, this is understood in several different ways.

Perhaps the image of God can be found in our consciousness and our abilities to love, reason, make moral judgments, laugh and make music and art? However some of the “higher” animals also show signs of some of these attributes, making the distinction less clear. Further, some people (e.g. new born babies, elderly people suffering dementia, those with mental disabilities) may not have some or most of these attributes, but that doesn’t make them less human.

This argument is seen by some as conclusive, but I’m inclined to think that it just shows that we cannot easily and fully define our humanity, and we do indeed share some aspects of God’s image with some of the higher animals. This view would generally be called dualism.

Spiritual capacity and relationship with God?

Perhaps the image of God is seen in our spiritual capacities, especially our ability to have a relationship with God? Many of our spiritual capacities may be similar to our abilities (moral sense, goodness, ability to love, etc), and relating to God probably requires that we have self awareness or consciousness. But most of us would think that there is more than this.

Some would say humans, but not animals, have a soul or a spirit, which is how we relate to God, experience the Holy Spirit, and experience spiritual regeneration. While I don’t believe we have a “immortal soul” which lives on after we die (I think rather we live in the next world because we are resurrected, not because we are immortal – see Do we have an immortal soul), I am certainly a dualist – i.e. I believe humans are more than physical.

But then the question arises – how do we get this non-physical nature and capability? Denis Lamoureux outlines three approaches that christians have adopted:

While these ideas seem to have merit, it seems to me that none of them are fully satisfactory. We may never understand spiritual development, because it cannot be measured physically (although some suggest it may explicable in purely naturalistic terms), but the problems with this approach to the image of God suggest we may need to look elsewhere.

In the Old Testament, the word translated “image” in the phrase image of God is used in many other places in relation to idol worship For the people at the time, an idol “was believed to be the true manifestation of the god in the midst of the people.” God forbade the worship of idols because they were not in any way true images of him, but also because he had something else in mind.

The phrase “made in the image of God” can apparently be equally well translated “made as the image of God”. God’s intention was nothing less than calling us to show his image to the world. “The image is not a built-in ability or capacity of human beings, but a role we are called to live.” (BioLogos)

I feel drawn to the third view, but I can see truth in all of them. It would be difficult to be called by God to be his image-bearers in the world, and to have a relationship with him, if we didn’t have the abilities which, generally at least, separate us from animals.

But I am happy to accept there is truth in all three views.

So who were the first humans?

The matters we have considered here lead to some clear, and perhaps disturbing, conclusions.

This is disappointing, perhaps even distressing. We don’t have answers, nor a likely pathway to arrive at answers. Scientific naturalists will be scornful of our views.

And yet we have no choice. Humanity, law and culture are on our side, and despite the confidence of scientists, science struggles to address these things because they are apparently non-physical. Most people think humans are different, and “higher”, than animals, and as much as they understand what naturalistic scientists think about humanity, would generally be critical of the view. Christians have even stronger reasons to believe in the value and “sanctity” of human life.

It may be tempting to go back to a literal reading of Genesis and creation de novo, but the evidence suggests we cannot (see Why the fuss about evolution?).

When does human life begin?

Photo Credit: 30,000-year-old cave painting of a hyena, found in the Chauvet Cave, France, and Chart of human evolution, both in Wikipedia.

« Why the fuss about evolution?
When does human life begin? »