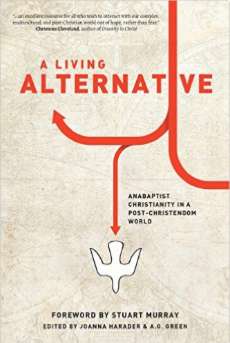 I wonder what comes into your mind when you read the word “Anabaptist”? Or the word “Mennonite”?

Perhaps, like me until a few years ago, you might remember these words from the time of the Reformation, when Anabaptists were a loose collection of idealistic “fringe” christians persecuted by Catholics and Protestants alike for the “sin” of baptising adult converts. And weren’t Mennonites serious people wearing funny clothes who appeared in a film with Harrison Ford ? No wait, they were Amish.

In fact the Mennonites are a denomination that is often very contemporary, and Anabaptist thinking is being seen by many as cutting edge and very relevant to today’s word, as this book, A Living Alternative, shows.

Anabaptism: an idea whose time has well and truly come

The western church seems to have lost its way. The church began with a small-town, wandering Jewish prophet, teacher and healer who stirred up the authorities, hung out with the wrong people, and had the gall to announce that God was beginning a new stage in his rule on earth through him, and all other powers and priorities had to give way to him. He taught non-violence, forgiveness, care for the poor and the perils of materialism, and said this was all good news for everyone.

In two millennia, his followers seem to have forgotten many of these values. Nations with a christian culture are among the richest and most materialistic in the world, most of them possess armed forces of unimaginable power, and they are not averse to using them against enemies that Jesus commanded us to love.

Anabaptists stand for most of these values that Jesus taught, and so stand against many of the values of modern western cultures. And so are attracting some of those disaffected by western culture and a church that seems to have lost the way of Jesus.

Mennonerds and A Living Alternative

This blog is part of the Mennonerds network, not because I am a Mennonite (I am not – there are no Mennonite churches in Australia), but because I believe Anabaptist thinking is closer to my own, and closer to Jesus, than any other system.

Twenty of my brother and sister Mennonerds contributed chapters to this excellent book, which seeks to show the deep relevance of “Anabaptist Christianity in a Post-Christendom World”.

The authors address a wide variety of topics and provide some radical insights. Here are a few that I found especially relevant.

Ryan Robinson examines the consequences of the “dangerous idea” that we can all read the Bible for ourselves. But churches control our interpretation via creeds and confessions, and then argue with each other. Jesus condemns such judgmentalism, and postmodern millennials are leaving the church because of it.

Ryan suggests we need to value loving God and our neighbour more than the “correct” atonement theology, and live and do our theology in humility and love.

Joanna Harader outlines the very interesting idea that we can learn ways of dealing with the Bible from the life of Jesus. She gives the following examples of Jesus, lessons we can learn and (sometimes) ways to participate in this truth in a christian meeting:

“This approach to the Bible follows all five of the aspects that John Roth claims are key to a Mennonite understanding of scripture: the Bible is central to the Christian life; it is best interpreted in community; our reading of the text is centered on Christ; we interact with the Bible for the purpose of becoming disciples; and Biblical interpretation is an ongoing process.”

Living for Jesus in a post-christian culture

Stephen Kimes starts from the observation that christianity in the US is losing its power, and Jesus-followers may soon be marginalised. He refers back to the early days of the church when it was persecuted, and the experience of Anabaptists and other dissidents in the Middle Ages and Reformation, and suggests we can learn some good lessons on survival, including: house church, be flexible in choosing leaders (so it is harder for them to be identified and targeted), don’t pursue power, be submissive and prophetic, build alternative communities, and depend on the Spirit.

Justin Hiebert notes that US christianity tends to be built on Christendom (a sense of power and privilege), attractional models, and building bigger churches and budgets. But, he says: “As culture begins to distrust any semblances of a grand meta-narrative, people are turning to personal, and especially shared, community sources of truth.”

Thus it would be more appropriate to seek “to accomplish six goals: an exaltation of God, the formation of a safe and welcoming community of faith (where all gifts, not just public gifts, are valued in a centred set), discipleship and personal transformation, alleviation of social ills, fulfilment of the Great Commission, and sustainable reproduction.”

If this sounds theoretical, he offers a very practical suggestion. “Here are five things that you can start doing right away: learn the names of your neighbors, walk your neighborhood regularly, invite others in, be present in the now, and pray.”

Jamie Arpin Ricci draws on St Francis of Assisi for some lessons for today about the word vs life and actions. Francis often preached (in a non-literate culture which depended on spoken word – unlike today) in public squares, using methods of troubadours (romantic prose, frolicking). He didn’t depend on entrenched power and privilege.

Donald Clymer’s family has a long history as Mennonites, he experienced legalism in the church in his youth, but also sees the good side of Anabaptism in community and mutual care/support, accountability (“Are you at peace with God and your fellow man?”), service and peace (conscientious objection). As a teacher in a Mennonite college, he sees frustration in his students at the narrowness of much church life – for example, they want to see inclusiveness in churches, a concern for the environment, love of nature, and an appreciation of mystery and the unknown.

He quotes Howard Bender on Anabaptism: “The focus of the Christian life was to be not so much the inward experience of God, as it was for the Luther, but the outward application of that grace to all human conduct and the consequent Christianization of all human relationships.” So, following Ronald Rolheiser, he suggests 4 essentials of spirituality:

Michael Grenholm outlines how in the ministry of the Old Testament prophets and Jesus, the Spirit worked miracles and prophecy, but also led them to be concerned for the poor and for justice (e.g. Luke 4). He points out that early Anabaptists, the early Pentecostal movement, the ministry of John Wimber, and Heidi Baker in the present day all had this twin emphasis, and suggests via Romans 15:18-19 that the church needs it.

Robert Martin likens politicians, business, and people generally, who are caught in systems that control them, to the Beast in the book of Revelation. He suggests fighting to change these systems may be a waste of effort, for the Beast simply changes form and continues. Rather, he suggests, we need to starve the Beast by offering an alternative – not by separating ourselves out like the Amish, but by being a holy nation (1 Pet 2:4-10).

Benjamin Corey believes US christians have a distorted view of christianity, blurred by culture: christianity = political conservatism, or guns, or capitalism. But Christianity should be contextualised to culture, not become one with culture. Jesus has become marginalised in much of the church, for his teachings are at odds with US empire, wealth, power and violence, and so passages in Paul or the Old Testament are used to justify behaviour. “Anabaptism invites christians to repent of the ways they have marginalised Jesus.” And start following Jesus again.

Drew Hart writes about racism and white supremacy, and observes: “In less than thirty years, the U.S. penal population exploded from around 300,000 to more than 2 million, with drug convictions accounting for the majority of the increase. The United States now has the highest rate of incarceration in the world, dwarfing the rates of nearly every developed country, even surpassing those in highly repressive regimes like Russian, China, and Iran.”

Those are just the thoughts which spoke most to me. There are many other good chapters – I especially enjoyed people’s stories of their lives and ministries, such as those by Brian Gumm and Samuel Wilcock.

Each chapter has a list of references and a study guide so the book can be used in a group.

I’m not sure if I wasn’t a MennoNerd whether I’d ever have read this book, or even noticed it. But it is well worth a look.

Afternote: Somehow I didn’t post this when I wrote it and then gave some people a link to the draft. But here it finally is, better late than never I hope!

« What you sow, you will reap – or perhaps someone else will?
Morning rituals »