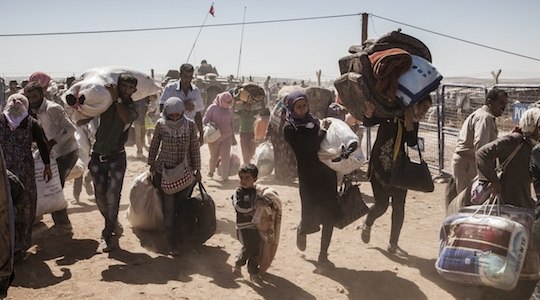 There have always been refugees – people fleeing from oppression and death that they cannot fight. And there has always been oppression and killing, as greed or fear or power lust drive people to destroy, enslave or oppress those who belong to another tribe, another belief or another power grouping.

But the last few decades have seen enormous numbers of refugees, perhaps because communications and transport are so much more readily available these days. And so we arrive at the present Middle East refugee crisis, which we are all only too aware of because of the wonders of TV and the internet.

Fellow MennoNerds have been blogging on this refugee crisis for the month of September, and there is little I can say to add to what others have said about the horrors and the desperate needs.

But it may be time, at the end of the month, to look behind the scenes and see if there are any lessons we can learn.1

A brief synopsis of the past 20 years

When the centuries old Ottoman Empire was defeated in World War 1, the region began to be re-shaped into the countries we see now. As is often the way, the borders weren’t always logical, some people groups (e.g. the Kurds) missed out altogether, and some countries were home to many different religious and ethnic groups.

The region achieved some level of stability, but war and aggression continued sporadically, including the ongoing Arab-Israeli wars, the Israel-Palestine conflict, the 8-year Iraq-Iran war in the 1980s, civil war in Lebanon, Iraq’s invasion of Kuwait in 1990 and the subsequent Gulf War in which the US and allies from the Middle East and the west pushed Iraq back from Kuwait.

Many of these wars were about oil, or simply power, but the long-time rivalry between the two main branches of Islam – Sunni and Shi’a – was a factor in many of the regional tensions. Saudi Arabia is predominantly Sunni, and Sunnis are are the largest Muslim grouping overall, but Iran and Iraq have more Shi’ites and there are Shi’ite minorities in most countries.

The US, wisely as it turned out, had limited aims in the first Gulf War, and its actions were view favourably by many Arab states. And so Iraq and its dictatorship remained intact, and kept a lid on tensions between Shi’ites and Sunnis, and between Muslims, Christians and Kurds in Iraq.

But the 2003 invasion of Iraq by the US and allies (notably Britain and Australia) had much larger aims and little regional support. Supposedly the aims were:

It is now history that Saddam Hussein was removed and eventually executed, and a new Government established. But nothing went according to plan after that.

After the war was over

Instead of a representative government, the war “provided an opportunity for members of the Shia Arab political elite to dominate Iraqi politics.” The state institutions quickly became sectarian, and Sunnis were marginalised. The delicate balance of Iraq’s “fragile cultural mosaic” was disrupted, and “fundamentalist and sectarian” groups exerted force against minorities, including women and christians.

Soon, many families were leaving Iraq as terrorist attacks became a fact of life. And in this unrest and the Shi’a supremacy, it is not surprising that Sunni elements became more radical. And out of this, ISIS was born.

In 2010 and 2011 the “Arab Spring” led to what appear to have been reformist and pro-democracy uprisings that changed governments in several of Arab states in North Africa. So when demonstrations began against Bashar al-Assad’s Alawite (a sub-sect of Shi’a) regime, it looked as if the Arab Spring was coming to Syria as well.

Not surprisingly, many of the fighters who came in to support the rebels were Sunni, funded by Saudi Arabia and Kuwait. Suddenly, into the power vacuum created by a struggling Iraq and a destabilised Syria, the extremist Sunni ISIS found an opportunity to create a “Caliphate” covering large areas of of Iraq and Syria.

So now in Syria and just outside its borders there are many different fighting groups – the Assad regime, the Iraqi army, Syrian rebels, Sunni fighters, ISIS, Shi’a fighters, Turkey, the Kurds and the Kurdish rebels, with the US and allies bombing ISIS and Russia supporting Assad. Obviously it’s a mess, with the western allies trying to oppose Assad and ISIS at the same time.

And so, after 4 years of a destructive civil war, perhaps 12 million Syrians are displaced and 4 million have fled the country as refugees. Most are temporarily living in adjacent countries, with those arriving in Europe comprising only about 10%.

How did it come to this?

Undoubtedly the major causes of this refugee problem can be found in the region. The destructive competition between Shi’a and Sunni factions, dictatorial governments, a large gap between the rich (especially the oil-rich) and the rest, and centuries-old hatreds.

But Professor Benjamin Isakhan argues that the US had too simplistic an understanding of the culture and politics of the region, which led to unrealistic expectations of the peace and democracy that would follow Saddam Hussein’s overthrow. The “new Iraq” and the disaffected Sunnis “destroyed the delicate sectarian balance of the region” and unleashed a new, more militant, sectarianism that spilled over into Syria and helped give ISIS legitimacy. Ironically, the war helped create the terrorism it was supposed to be preventing.

So the 2003 Iraq war not only cost almost 200,000 lives, $US2 trillion, and destruction and trauma, but it also was a significant contributing cause to the war in Syria (where perhaps a similar number of deaths have occurred) and the refugee situation that appalls us all. The money could surely have been better spent constructively in the region, the lives saved, and a better outcome obtained.

There are undoubtedly political lessons to be learnt, but I will leave them to those who study politics. But what can we christians learn from this sorry story?

Christians in the US

The Department of Peace Studies, University of Bradford, has developed criteria for deciding whether wars are motivated by religion or not, and the Iraq invasion is judged as one of the few modern “religious wars” because of the religious rhetoric used by President George W Bush and his advisors.

Can anyone think that if Jesus was President he would have taken this course?

As an outsider, it seems as if patriotism has replaced the non-violent teachings of Jesus as the basis for some forms of US christianity. Worse, this war which was said to have justice and righteousness behind it, appears now to have been mased on either wrong information or deception, and has left a worse situation for the Middle East, and especially for christianity in the Middle East.

I don’t think we christians should always be absolute pacifists – there may be some situations where force is needed, not to save ourselves, but to protect others. But surely we need to take Jesus more seriously, that we shouldn’t take revenge, that we should love our enemies, and that if we live by the sword we will die by the sword?

The Iraq invasion and its legacy is surely a warning that US christianity needs to re-think its attitude to power, violence and the protection of wealth and privilege.

christians in Britain and Australia

Unlike in the US, christians in Britain and Australia generally opposed their country’s involvement in the war. In that they can feel vindicated.

But that view didn’t translate to the actions of the two governments, both of which were led by men who identified as christians. Christians in these two countries surely still have some work to do to see Jesus’ values more widely accepted among those who claim to follow him, especially among christian politicians.

Isaiah had a vision of nations beating their swords into ploughshares. We don’t live in that world yet, and so there will inevitably be compromises and failures to express the values of God’s rule.

But we western christians may need to repent of attitudes that don’t align with God’s kingdom, pray that we won’t be fooled again into thinking that warfare can ever be more than a terrible last resort, and is generally working against God’s ways. And then using our time and resources, and our votes, to see that we work constructively, not destructively, for a better world.

Photo: Syrian Kurdish refugees cross into Turkey from Syria near the town of Kobani. UNHCR