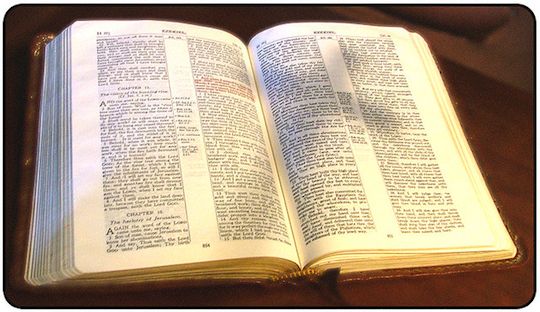 I have been considering the implications of Peter Enns’ suggestion that, in the light of the evidence, we should understand the Old Testament differently than we have done in the past. In a comment on the post Interpreting the Old Testament, Brisancian has asked a number of questions about how we can know what’s true.

I thought the questions were important enough to answer in a new post. Quotes from Brisancian’s questions are shown as blockquotes.

There are many religions. If we allow the Bible writers, and our interpretations, to be so creative, how do we know it’s not all just a fraud?

It could be argued that it is simply human lurching and confirmation bias at their worst, entirely consistent with the many fraudulent faith practices the world over. On what basis can we discern that with Christianity, we do not have a similar fraud? By what criterion?”

We wind up, to put things very simply, in a place where all interpretations could be valid, and we ultimately have no referee – not even a hermeneutical method – by which to know what is real and what isn’t. …. You are free to believe the Bible despite the fact that the writers contradicted each other and shape shifted as time went on, because on the incarnational model, that’s the way God wanted it. Perhaps its simply the way *we* wanted it.”

We don’t have certainty

My first response is to point out that we humans have certainty about very few things – basically maths and logic. Everything else, even science, is only more or less probable.

I don’t believe christian belief is any different. Information, evidence, experience, reason, etc, can only lead a believer to the conclusion that christian belief is probable. We face a choice whether we will trust God on this evidential basis, or not.

And disbelief is also no different. The evidence can only lead a sceptic to the conclusion that christian belief is probably wrong, and so they make the choice not to trust the gospel writers and those who claim to have experienced God.

A more fluid view of the Bible doesn’t change anything

Those who believe the Bible is factually inerrant, and to be interpreted literally, still don’t always agree on the message they get from the Bible. Inerrancy doesn’t lead to certainty. So taking a more fluid approach, as Enns suggests, doesn’t really change anything much.

So how can we know religious truth?

This is the key question, I think. And I think the answer is quite clear – we know religious truth the same way we know any other truth, from the evidence.

My website Is there a God contains pages of assessment of evidence for and against the existence of God. The section Truth and evidence specifically addresses some issues related to how we know.

Summarised in Why believe?, I suggest that evidence for God falls into 5 categories:

So that is how I believe we can reasonably believe that christianity is true.

This is actually an exaggeration, as I have shown in How many christian denominations worldwide?, most of these 30,000 are just individual organisations. There is still much variation in belief, as there is variation in many matters relating to human beings, but not as much as you suggest.

how does one establish that Judaism was ever legitimate in the first place?”

I don’t know how a Jew would answer, but my answer is that I don’t have to establish that. I believe in Jesus, and I accept what he said about the Old Testament – that is really the main point Enns makes.

what if the Jews were right all along, and Jesus was a fraudulent Messiah?”

The outline of why I think christian belief is the most reasonable, above, answers this. The historical evidence for Jesus being the Messiah is strong. In my judgment it has a stronger historical basis than any other belief, and a stronger claim to truth. But I don’t believe other religions are totally wrong, but they miss some important truths found in christianity.

The fulfillment of prophecy was a major argument that Christians were correct …. yet we find that much of the OT prophecies had been retooled to fit Jesus – the fit was not intrinsic.”

I wouldn’t use prophecy as a major part of my reasons to believe in Jesus for this reason, though I might if I was talking to a Jew who is familiar with Jewish approaches to interpretation. But there are some prophecies that cannot easily be misunderstood – I’m thinking of things like Isiaah 9:1-7, 53:1-12 – and I think these show deep and significant truths that clearly point to Jesus in an amazing way.

Some things are very clear – e.g. Jesus lived, taught, healed, died, was resurrected, and so established the kingdom of God on earth, and we are invited to be part of that – and these are the really important things. Other things are not clear, and may well be understood differently in different ages, and I am not worried much about that.

Most christians try to resolve this by setting up fixed doctrinal statements, and unwritten but still fairly fixed codes of behaviour. But I don’t think that is the New Testament way. Instead, God gives us his Spirit to lead each of us, and all of us collectively, into new truths, if we will only listen. In these things, we “walk by faith, not by sight”.

Perhaps the empty tomb was simply a literary device that came to be thought of as literal. Perhaps those who say that Paul only believed in a spiritual resurrection were correct (he never mentions an empty tomb).”

The evidence for the resurrection is very good – most scholars, not just christians, believe Jesus was indeed executed and buried, his tomb was later found empty, and/or that his followers had visions of him alive. It is a pre-commitment to naturalism that prevents belief in the resurrection, not a lack of historical evidence.

I think very few scholars would agree with this statement about Paul. Paul speaks of Jesus dying and rising again in 1 Corinthians 15 in a way that only makes sense if both are physical events.

Perhaps the creation account is simply allegory. That would mean that God’s Word does not actually tell us where anything came from. And millennia of believers have asserted that it did, and so were quite misled by “revelation”.”

Perhaps not allegory, but pehaps myth. I agree. But I disagree with the other two statements.

I don’t believe it is correct to say that OT expectations were wrong – they just didn’t have a very clear expectation. But we believe there is growth in God’s revelation, culminating in the coming of Jesus and the Spirit, and it is they who give us our reason to believe in “life in the age to come”.

You are free to believe the Bible despite the fact that the writers contradicted each other and shape shifted as time went on, because on the incarnational model, that’s the way God wanted it. Perhaps its simply the way *we* wanted it.”

My belief in the NT is based on the conclusions of the historians. There are minor apparent contradictions and variations, but the central message is clear and consistent. My belief in the OT is based on Jesus, and his attitude suggests to me that Enns is right about it. I don’t think it has much to do with what I want.

There is no source of information that I know of that we regard as being without error. We are used to minor errors in everything human beings do, and we cope with that quite well.

My faith is based on the NT, and it has been heavily scrutinised by secular scholars. Its problems and difficulties are well known, but that hasn’t stopped them almost unanimously agreeing that the NT tells us some good historical information about Jesus.

On that basis, it is reasonable to trust that the difficulties are not insurmountable and the information we gain from the parts that scholars are uncertain about is sufficiently trustworthy. That is a matter of faith, based on the evidence we do have.

Thanks Brisancian for some important and legitimate questions. I hope I have given reasonable answers, but there is nothing compelling anyone to accept them. We each make a choice.

I have lived with my choice for half a century, and while I have had plenty of doubts and questions, I remain happy with my choice and as convinced as ever that it is the right one. I wish readers, including Brisancian, well in making your choices.

« What is the Bible and what are we supposed to do with it?
Transform your church – permanently »