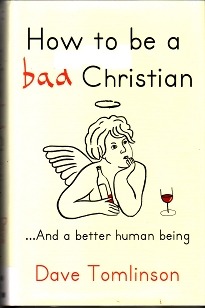 Dave Tomlinson is a British christian who has always pushed the envelope:

I think he says a lot of good things and a few questionable things.

What he’s on about

This book is easy to read and includes many good stories about people Dave has met, helped and learned from. You’ll get some good ideas from it.

Dave wants to bridge the very real gap between church and ordinary people. The book says:

This book is written for you – for countless ordinary people who may cringe at organised religion, have little time for creeds and doctrines and churchgoing, yet who nevertheless attempt to live in the spirit of Christianity …”

This seems to me to be a worthy aim.

Dave says “following jesus is a lot less weird, and more fun, than most people think.” His good news is built around the idea that Jesus doesn’t call us to be ‘religious’, but to follow him and live the “way of love”. This means:

This leads Dave to a number of conclusions:

There is a lot here I can identify with and agree with. It certainly seems true to me that Jesus emphasised the importance of following him in living lives of loving care for others, especially those doing it tough – certainly more than most churches do today. And that he emphasised doctrine, hierarchy, legalism and formulaic approaches less than we generally do.

So Dave’s “no frills” approach and identification with those who don’t feel “good enough” to be a christian or go to church, is very attractive to me.

How do we know?

And yet, how do we know he’s right? Is God really so benign that he is OK with most of what we do and doesn’t want anyone to feel guilty – sort of a great Grandfather in the sky? Is it all really that easy?

I would certainly like it to be so, but how does Dave know?

The Jesus of history?

I believe very strongly that we must try to know the Jesus who really lived – and to do that we need to understand Jesus in his first century Jewish context. I have criticised modern western christianity for, to some degree at least, manufacturing a Jesus in a more comfortable image than the reality the historians describe, so I have to measure Dave Tomlinson’s Jesus against the same criteria.

And I have to say, reluctantly, that Dave has got a little closer than the western church, but not much. Dave portrays Jesus as a life-affirming, loving, peaceful character, whereas the historians tell us he was more edgy than that. To most historians, Jesus was closer to an Old Testament prophet that we may imagine, a Messiah figure who was certainly going to shake things up, and someone whose death was redemptive. He was compassionate to those at the bottom of the social pecking order, but had tough expectations of his followers.

Dave says very little about these things, so I can’t help feeling that some of his teachings are more his own than from Jesus.

I think we can learn a lot from this book. I think we can probably do most of the things Dave suggests we should do, and get far more compassionately involved in the lives of people who need to know more of God’s love. But I don’t think a follower of Jesus can believe many of the things Dave tells us, they are just not true to the Jesus of history.

I believe christianity is changing, generally for the good. I believe it needs to move in many of the directions Dave has shown us. It will be tempting to move as far as Dave indicates, but I think that is not the way the Spirit is leading us. I hope we keep a stronger anchor on God’s truth.