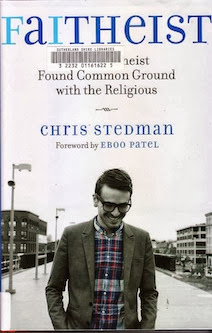 I have several times posted here and elsewhere about relationships between christians and atheists, and my wish that we do better at this, for example:

So when I saw a book in our local library by an atheist with a similar interest, I had to read it.

Chris grew up in a relatively secular US family. He was perhaps slightly precocious, and somewhat of an outsider.

He was only vaguely aware of religion until his family “flirted with Unitarian Universalism” for a while, then he made friends with a Jewish girl and joined in some of her families religious festivities.

Then, at about age 12, he was invited by fellow students who he admired to attend their church youth group. He went, enjoyed the music and the social equality where “popular kids mingled with nerds unflinchingly” and “felt enveloped by love”. He so much wanted to be part of it all that, on his third visit, he ‘went forward’ and ‘accepted Christ into his heart’.

Trying to live as a christian

Chris found that, although it was free pizza, popularity and love (from God and the christian community) that appealed to him initially, it was the idea of Jesus as social reformer that came to appeal to him most, an aspect not stressed by his new church. And so he volunteered in various christian social action trips and events.

But gradually he became aware that he was gay. He tried to hide his sexuality and earn God’s forgiveness for it, but the effort took its toll and he became withdrawn. Eventually he “came out”, with the support of his mother and some counselling from a liberal-minded Lutheran pastor who reassured him God loved him just the way he was.

He became an “energetic queer Christian activist” and at age 18 headed off to a Lutheran college with hopes of becoming a minister. But it didn’t work out that way.

He says he still doesn’t really see any particular ideas or events that made the difference, but somewhere along the line he came to the realisation that he no longer believed God existed. He says he never really had a strong attachment to Jesus, but he thought Jesus was an essential part of the social justice package.

Living as an atheist

Despite his atheism, he found college to be a positive experience, especially the opportunities it afforded to do global justice field trips and volunteer at local community service centres. After he completed his degree, he moved to a small town and worked for a Lutheran social services agency, where he came into contact with many christians and some muslims among those he was trying to help.

The realisation hit him that militant atheism wasn’t going to help these people – if he wanted to help them he needed to accept their religious beliefs, despite his disagreement. And so began a new and unexpected stage in his life.

The making of an interfaith activist

He decided to learn more about the religious divides, and enrolled in a religion Masters course at a seminary. He became committed to the idea of inter-faith dialogue (which for him included atheists) and now works as a Humanist Chaplain at Harvard University.

The message of the book

Chris wants to increase the tolerance and dialogue between people of all beliefs, and none, so that they can “find common ground and work together to make this world …. a better place.” He is critical of the more militant atheists, and believes “there is a significant parallel between the certitude I felt as a conflicted, fundamentalist Christian and as a conflicted antireligious atheist.”

Reasons to be conciliatory

The bulk of the book is his story, but he ends with a discussion of different reasons why he believes atheists should follow a more conciliatory path:

Atheist arguments against being conciliatory

He doesn’t accept arguments that interfaith work requires keeping silent about what atheists hold firmly – he argues that it actually creates more opportunities to discuss. He also believes that interfaith work doesn’t bolster religious privilege nor compromise the atheist opposition to faith.

Chris has some strong messages for fellow atheists, but I am more concerned about how we christians should respond. I think the following issues are worth considering:

I plan to come back to some of these questions.

Do I recommend this book?

I don’t think christians need to read these arguments to be spurred on to love others, even those that some christians may regard as enemies – after all, that is a fundamental teaching of Jesus, though often ignored or ‘explained away’ by christians. But reading Chris’ story, or stories like it, may help give us a picture of the difficulties some christians, or those attracted to christianity, may face, and so help us at least be more sympathetic.