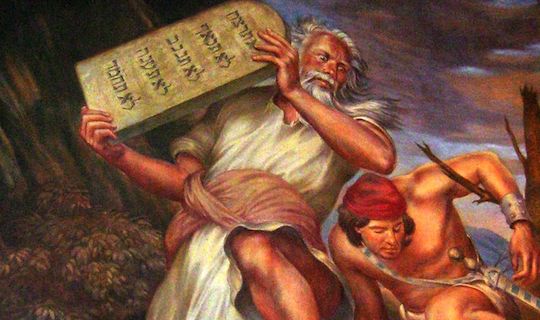 This is old now, but I’ve not posted it here before, and it’s sort of appropriate right now.

Some critics of the Bible say it cannot be considered true in any sense because it doesn’t contain accurate scientific information. If God had really written the Bible, wouldn’t it be more scientific?

Reading this comment years ago set my imagination running, as I envisaged Moses (about 1400 BCE and the traditional author of the first 5 books of the Bible) discussing science with his brother Aaron.

Scene: The Sinai Desert, 1400 BCE. Two unshaven and dust-covered men are sitting around a campfire.

Moses: Hey Aaron, how do you spell “quark” in Hebrew?

Aaron: No idea. What do you want to know that for?

Moses: It’s Yahweh again. Keeps telling me all this strange stuff about strangeness and charm and spin, and quarks and gravitons and dark matter. I don’t mind not understanding, but I need to know how to write this stuff down.

Aaron: Tell him we’re just stone-age goat-herders living a subsistence existence, and you’re the only one who can read and write. Ask Him for something simpler, like why does the sun rise every morning?

Moses goes away up Mt Sinai, and returns 3 days later.

Moses: He says the sun doesn’t rise in the morning, its the earth moving.

Aaron: I’ve felt the earth move once or twice (snigger), but not usually in the morning!

Moses: Nothing like that bro’, we live on a giant ball, and it goes round and round on its axis, and that makes the sun look like it’s moving.

Moses: Dunno, bro’, I asked him that and he started to talk about radii and something called a pie, and the number 3.1412, but then he said “forget it!” and muttered under his breath about next time I’ll just say 3.

Aaron: Did he tell you anything else?

Moses: Two more things. One was that when he said we came from the dust of the ground he meant we had gradually evolved for billions of years.

Moses: Dunno bro’, but I think it’s a number greater than two.

Aaron: What does evolved mean?

Moses: He says it actually took him more than 6 days to make all this. I told him I didn’t really care how long he took, I wasn’t in any hurry.

Aaron: What was the other thing you learnt?

Moses: He said that one day people would find it easier to believe all this came about by chance than believe in him. I said, no, I was willing to believe all the other crazy stuff about quarks and pie if He said so, but I couldn’t come at that!

Aaron: What did he say then?

Moses: He said, let’s start again. Just write this down: “In the beginning, God made the heavens and the earth” And I said, that’s more like it, now you’re talking my language! He just smiled and said, thanks.