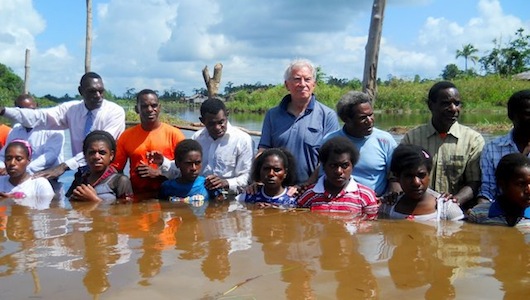 If you were an aspiring christian missionary, would you take your wife and three young children deep into the jungles of West Papua to a headhunting, cannibalistic tribe who valued treachery as a virtue? Nope, I don’t think I’d have the guts either.

But Don Richardson did. And God blessed his sacrificial ministry.

Back when I was young, Don Richardson’s book, Peace Child, was a big thing, and an important thing in my life as a young christian.

When the Richardson family arrived among the Sawi people, they found a culture built on warfare, treachery and deceit between adjacent tribe. Particularly obnoxious was the process known as “fattening the pig for the slaughter” whereby an apparent friendship was developed for the purpose of luring the victim into a sense of security, suddenly shattered when he was confronted, killed and eaten.

The Richardsons were not touched, because they brought prestige and western medicine to the hosting tribe, but they were appalled by the practices and agonised over how to make a breakthrough. Worse, when they told the story of Jesus, the Sawi made Judas their hero because of the way he had (in their eyes) fattened Jesus for the slaughter.

At last the Richardson’s had the key to the Sawi culture. They explained that Jesus was God’s peace child, and he was killed! Judas was no longer the hero, as the Sawi in large numbers put their faith in Jesus.

Don Richardson went on to research similar nuggets of truth in pagan cultures around the world. He called them “redemptive analogies’, he found them all over the world, and he argued they were an important key to missionary work. He wrote his discoveries up in the fascinating book Eternity in their hearts. The idea was an eye-opener to me, and I think can be applied in our own western culture as well, if we have the wisdom of the Spirit.

And so it was a thrill and an inspiration to see the video below. Don, now in his late seventies, and his three boys travel back to see the Sawi people 50 years later.

I won’t say any more. Check out the Never the Same video (it’s about 10 minutes long), and if you haven’t read the books, I recommend both of them.

Never the Same from Pioneers-USA on Vimeo.

« I'm a published author!
Are we known for grace or judgment? »