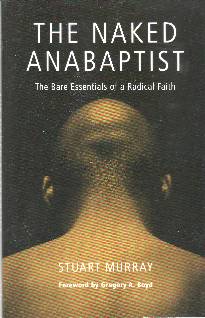 The Anabaptist are a often forgotten part of the christian church. We know about the split which separated the eastern Orthodox churches from the Roman church. In the west we are more familiar with the Reformation, where the Protestant churches split from the Roman Catholic church. But there was a third group in the Reformation, persecuted and maligned by both sides, but growing in influence today – the Anabaptists.

This book outlines what Anabaptists believe, and why they are coming into greater prominence.

Because they emphasised believers’ baptism and didn’t recognise child baptism as valid (‘Anabaptist’ literally indicates ‘second baptism’, a title given to them by their enemies), they were a threat to church authorities and the the growing Protestant movement. And because they tended to support the peasant movements, they were a threat to state authorities as well. As a result they were persecuted by both Catholics and Protestants, with thousands of them being martyred.

Some Anabaptists supported violent revolution, and were decisively defeated, but most were pacifists, and reacted to persecution by retreating into more separated communities. Their vision for their communities and for society was still radical, but their opportunities were limited. The Mennonites, the Amish and other small groups grew out of this movement.

While the Anabaptists are not well known by most christians, they have created a legacy that is becoming increasingly valuable today. In its four main chapters, this excellent book outlines the Anabaptist emphases:

I believe all these emphases are relevant and important for today, and can easily sit alongside and inform more traditional church programs and goals. The evidence suggests that the western church is facing greater challenges in the future (see The future for the church), and I believe we need to re-examine our understanding of the gospel and mission (see What message?). These emphases are relevant to these needs.

I thoroughly recommend this book as a catalyst for thought, planning and action. I will blog in coming weeks about some of these emphases, in the hope I may encourage some of us to new understandings and action.

« A climate change conspiracy?
The way we treat deserters »