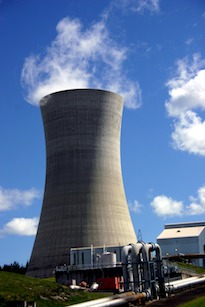 We’ve seen that the scientific data shows that the world’s climate and weather patterns are changing, and that this spells disaster for many people in the world, and will impact all of us.

To do something about it, we need to know the causes.

Climate change is caused by an increase in the earth’s temperature. Natural causes can include volcanic activity, a change in the energy from the sun and variations in the earth’s orbit around the sun.

However this is little evidence of dramatic changes in any of these factors sufficient to account for the dramatic temperature increases of the past few decades, and scientists have concluded that the main cause is the increase of the gases water vapour, carbon dioxide, methane, nitrous oxide and chlorofluorocarbons in the atmosphere. These gases trap the sun’s energy which reaches the earth’s surface, and reduce the amount reflecting back into space, thus warming the earth’s surface.

Scientists are now 90% sure that the major source of the increased gases is human activity, which has significantly increased these gases since the industrial revolution. The major causes are the burning of fossil fuels for energy generation and transport, and agricultural activities (land clearing, fertiliser use, flood irrigation and stock all produce greenhouse gases).

Sceptics are still arguing this point, but the consensus of scientists and scientific organisations around the world now supports the conclusion that the major causes are human, not natural. This includes reputable organisations such as the US national Aeronautics and Space Administration (NASA), the Australian Commonwealth Scientific and Industrial Research Organisation (CSIRO) and the European Academy of Sciences and Arts.

There are some actions we can all take – eat less meat, pay carbon offsets when we travel by plane, use more energy efficient transport and use less energy at home (avoid air conditioners!). But the most important response we can make is to support political action to provide incentives for more efficient energy generation, transport, industry, mining and agriculture by being willing to pay more for goods and services.

Whatever happens, our cost of living will increase – either by taking remedial action now, protecting our planet and the lives of millions of people, or by continuing to vacillate, condemning millions of people to disaster and paying the inevitable cost of the problems which climate change will bring.

There’s no real choice, is there?

Next: A Climate change conspiracy?