Not long ago I commented on the number of Atheists who once were christians I had come across on the web and in real life. Recently, I’m finding former pastors.

Many of these guys are still struggling with doubt, unwilling to give up their job and let down the people who depend on them, but also unwilling to keep up a pretence.

What’s going on? And what’s the answer? 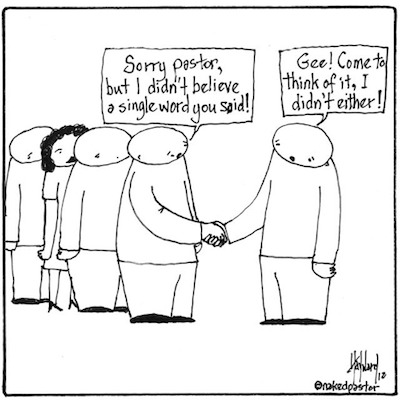 Surveys and assessments in both the US and Australia suggest that pastor stress and burnout are increasing. In the US, it is estimated that at least half of pastors entering the ministry will leave long before they retire (Richard J. Krejcir, 2007), with some estimates saying 50% will give up before 5 years and only 10% make it through to retirement (Pastoral Care Inc, 2009). 1,500 US pastors quit ministry every month due to stress, extra-marital affairs or conflict in thier churches (DJ Chuang, 2010). In Australia there are as many ex-pastors working at other jobs as there are pastors working in ministry (John Mark Ministries, 2003).

It is not made clear how many of these leavers have also lost their faith, but we can only presume it is a significant number.

Various diagnoses and remedies can be found, but it seems that most of them accept the status quo of how ministry is done, with pastors leading and preaching and congregations hopefully following and listening. I can’t help feeling a major problem is how ministry and church is conceived, and radical change is needed, but here I am only examining loss of faith.

Based on a small sample of observations I have made on the web, a few themes emerge.

1. Do converts know why they believe?

In a strongly christian culture, as is found in many parts of the US, it is possible to profess faith in Jesus and even become a pastor without having ever adequately considered the options and reason for belief and disbelief. Converts will usually have some reason why they believe, but it may not stand up to the scrutiny they may give it later in life, in response to doubts or hard questions.

I have already suggested (Why do some christians give up belief? in the Training disciples to stand series) that our discipleship and evangelism should include some intellectually respectable apologetics. This applies double for training of pastors.

Many traditional beliefs are under increasing criticism. Jesus promised that the Holy Spirit would lead his followers into truth (John 16:13), and we see examples of this in Peter’s dealing with Cornelius (Acts 10) and the early church’s decision on following the Old Testament law (Acts 15). One of the strengths of christianity over two millennia has been its ability to adapt, over and over again.

But today it seems that evangelical christianity has become so defensive that attempts to re-think some matters of doctrine and living are met with a strong and implacable resistance. Too many christians and churches have become bound by rules rather than living in the freedom of the Spirit (2 Corinthians 3:6). Pastors are especially vulnerable here because their employment may depend on conformity.

One result is that pastors are often called upon to defined and teach doctrines and practices which they can no longer believe in. Is it any wonder that some respond to this black and white approach by choosing to leave the faith entirely? If evangelical Christendom was less fearful and more flexible, it needn’t be that way.

In confirmation of this, I find that many pastors and lay people who have quit the faith still believe christianity must hold a hard line on many of the doctrines that they personally reject – relating to such matters as the inerrancy of the Bible, creationism, homosexuality, hell, hard-line evangelism, etc.

A strange pattern I have observed is that some who are in the grip of doubt and recognise that it is slowly leading them out of faith, appear to be very passive. They seem to be observers rather than active participants in the process.

I tentatively put this down to a lack of adequate reasons to believe in the first place. If asked why they believe, they seem to have little to say. So when a difficult question arises (most common is the commands of God in the Old Testament to kill masses of people in the promised land), they focus on the very real problems presented by these passages, and seem to have little to put against it as a reason to believe.

It is here that the benefit of competent apologetics could be felt. CS Lewis said (words to the effect) that when confronted with a doubt, we need to ask whether this doubt changes any of the reasons why we believe. If it doesn’t, then it remains a doubt or a problem, but not a reason to change belief. I have always followed this approach, and while troubled by the OT killing commands, they don’t change my belief in Jesus. But some doubting pastors don’t seem to know how to address their doubts. They are almost like a rabbit caught in headlights.

Pastors often feel isolated, and unable to reveal their doubts. There are websites to help pastors retain their faith and ministry as there are websites to help them leave both. Churches and christians need to be less judgmental and more supportive. We need to change the way pastors are seen as ‘presidential’ leaders, but in the meantime, we need to make it very clear we are walking with pastors on the same journey, sometimes with the same doubts, but always with the same Spirit.

And when a pastor does give up ministry, and even faith, then is not the time to judge them and criticise, but to show grace and empathy.

Here are a few websites to give you the flavour of what I’m talking about: