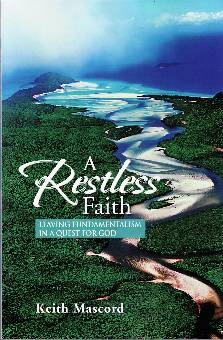 I don’t believe in labelling myself, apart from being a follower of Jesus – Paul points out the dangers of this in 1 Corinthians 1-3. But it remains true that my formative years as a christian were within a moderate, moderately reformed, evangelical church. And I am very thankful for that time.

But evangelicalism is under attack, not just from without, but also from within, as evangelical believers increasingly question its underpinnings. This well-written, absorbing and thought-provoking book (A Restless Faith: Leaving fundamentalism in a quest for God, by Keith Mascord) is another milestone along that path.

Keith is a Canadian born Australian who was brought up in a warm, fundamentalist version of evangelicalism. He trained as a teacher, then as a minister, and served as a pastor in the Anglican Church in NSW. For 15 years he lectured in apologetics and philosophy at Moore Theological College, which trains clergy for the conservative and evangelical Sydney Diocese of the Anglican Church. During this period he completed a PHD in philosophy.

But during his time as a College lecturer, he began to question more and more of his childhood faith. He didn’t question Jesus and God, and as a lecturer in apologetics, he was well-placed to assess christianity’s intellectual credentials, but he questioned many of the other doctrines of fundamentalist christianity. He subsequently quit as a lecturer, and later as a parish minister, though those choices were more due to church politics than doctrine.

The book is written as an autobiography, with discussion of various doctrinal and church politics issues embedded where they arise in the story. It is an easy read, and the story line leads the reader along nicely – I finished it in just a few days.

Keith has some interesting things to say about both doctrine and church politics:

Keith is quite critical of the Sydney Diocese of the Anglican Church, especially for its culture of fear and control. It is true that we only see one side of the story, but he writes with such grace and humility that it is hard not to believe the picture he paints of fearful conservatives using political methods of lobbying and controlling to preserve their particular understanding of christianity, even if people are trampled in the process.

There came a point when he wrote an open letter to the diocese urging a greater measure of love and grace, humility instead of arrogance, and respectful debate rather than control and censorship. He argued that the much publicised mission inaugurated by the archbishop was failing because Sydneysiders could not warm to a church that did not live according to its ideals. He received hundreds of emails in support, from lay people and clergy, but in the end the response was token.

This book is well worth reading for its account of a thoughtful and committed christian grappling with ideas and church politics that challenge his faith and understanding. Because it is basically autobiographical, it is easier to read, though I would have liked to see some of the issues developed a little more, but that is a minor matter. You can buy it (paper or ebook) here.

Whether we like it or not, I think it is almost inevitable that the evangelical church will move in the direction he has moved – the next generations simply will not accept some of the givens of the past – though of course a shrinking number will continue to defend their traditional territory. I draw this conclusion as one who agrees with most, but not all, of what he thinks, and has travelled a similar path, so perhaps I am not objective. Time will tell.

« Pastors who once were christians
Alice Cooper in Sunday School? »