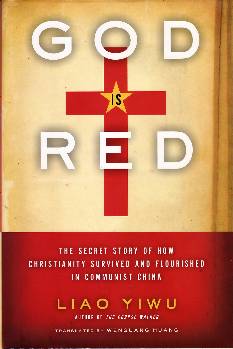 Most christians are familiar with missionary stories, where brave christians battle great odds and dangers, but end up triumphant. Most of us are encouraged by these stories, written by christians for christians.

But here are stories of incredibly persevering christians written by a Chinese non-believer who clearly respects each hero he interviews.

Liao Yiwu is a Chinese author who has researched what it is like liking on the margins of communist society and researched the experience of members of the outlawed Falun Gong movement, and a dissident who has been imprisoned for his criticisms of the communist Government. He is not a believer, but in this book he reports his interviews with chinese christians, mostly in the far-flung southwest rural regions, most of whom have also been persecuted by the Government.

In this book, you can meet some amazing and heroic characters:

The talented surgeon, Dr Sun, who became an important official in a hospital and medical school in Shanghai. But after opposing corruption in the medical system and refusing to compromise his christian faith, Dr Sun quit his prestigious position and embarked on a life as an itinerant doctor in a remote region where the poor residents couldn’t afford medical care. God led him to set himself up with a small set of instruments, and he performed operations such as removing tumours and leg amputation by torchlight in bedrooms, assisted by untrained locals.

He said of amputation: “The process is nothing mysterious. It’s very much like carpentry. You need a saw, a file, a chisel, a hammer and a planer.” He ended up training 30 or 40 students and set up a rural medical network.

100 year old Zhang Yinxian, orphaned at 3, was brought up by relatives as a Catholic, and became a nun. In the 1940s, during a famine, the nuns cared for hundreds of abandoned babies. In the 1950s, after the revolution, their church was confiscated and they endured great hardship working as subsistence farmers for more than 30 years. In her seventies, she staged a hunger strike to gain the return of the church property, receiving promises, but no action. At 101, she hoped to live to see the promises honoured.

Wang Zisheng‘s father was a respected christian targeted by the Cultural Revolution. Wang saw his ageing father violently carried off by soldiers and imprisoned for four years before he was executed. His family were allowed to see him only once in this time, but they were allowed to take his body home and bury him in an unmarked grave.

But Wang continued to lead the christian meetings begun by his father, and when the Communist officials visited the village and demanded to know who was the new leader, Wang stepped forward immediately. He too was imprisoned, spending 4 months in solitary confinement in a small dark room. In all, seven members of the family, men and women, were imprisoned and one committed suicide, before all were released. Wang said later: “I don’t feel bitter. As Christians, we forgive the sinner and move on to the future.”

Zhang Yingrong became a preacher and a translator at a mission hospital. But because his family were well-off, he was denounced as a Landlord, made to kneel on the ground for three days and nights, and so starved that he was unable to recognise his wife, who thought he would die. There was a severe famine that year, but he survived, and lived as a respected elder to 85.

Yuan Xiangchen‘s family were not christian, but he became interested and studied at seminary. When the Japanese invaded in 1937 he fled to the south of the country and ministered to the local christians. When the communists took over he refused to get involved in politics and allow the Communists to control the church. He continued to preach and baptise.

He was eventually imprisoned for 21 years, spending six months at one time in a two metre square cell. Four times, due to overcrowding, he was sent to the country where the prisoners were forced to build their own cells, sometimes in freezing conditions, and then imprisoned in them. When he was finally released, he was 65. He started a new church and continued to minister until he died at 92. All his six children are strong believers.

the world was not worthy of them

It is surely true that the world was not worthy (Hebrews 11:38) of these unsung heroes. We should hear their stories and learn again what it means to be faithful to Jesus.

This book was many things to me – challenging, a fascinating glimpse into a culture I know little about, funny and inspiring. It is all the better for being written by an outsider, someone who doesn’t share our faith or speak in our cliches. This is a neutral witness who gives us an accurate picture of life at that time in China. The heroics are all the more impressive because of his impartial and matter-of-fact descriptions.

If you read this book, I don’t think you will be disappointed.

« Archaeological evidence for Bethlehem
Pastors who once were christians »