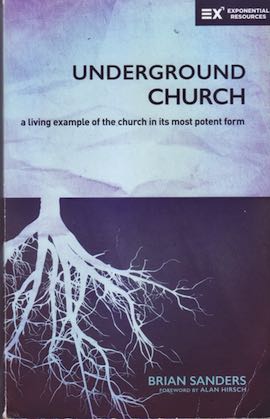 This is possibly the most revolutionary, revelatory and important book about the church and mission I have ever read.

If you are interested in how the 21st century church can become a missionary community in first world countries, this book can teach us new ways, and inspire us to new efforts.

If you are tired of the church life that you have inhabited for years, and want something new, effective and Jesus-focused, check out this book.

I learned so much from it. Ideas I have had were confirmed in it. I was inspired by it.

Read on to find out why.

It is church, Jim, but not as we know it

The Underground is a new kind of church I wrote about a few months back.

It began less than two decades ago when a bunch of university graduates who had been active in mission on their campuses found going back to their churches to be unfulfilling. They wanted to follow Jesus and care for the poor and suffering, and their churches didn’t provide adequate opportunities for them.

So they set up a bunch of “microchurches”, small groups dedicated to doing mission rather than meeting for their own needs. The missionaries in the microchurches were supported initially by one man, and eventually by a small staff who helped equip the leaders and provide services to them.

Now the network has grown to more than 200 microchurches, supported by the Hub, a large multipurpose building with meeting rooms, computers, video equipment, etc, where about 20 staff with skills in finance, multimedia, personal development, mission, postmodern culture, etc, support the 200 microchurches and their missions.

These microchurches serve all different sorts of communities – victims of the sex industry, college students, homeless, gamers, dancers, abuse victims, foster parents (to name just a few). Each seeks to bring the wholeness of Jesus into those sub-communities.

The growth of all this in less than two decades is remarkable enough. But the ideas behind the Underground are well worth considering. Here are just a few of the many things I learnt that challenged me while reading this remarkable book.

The Underground doesn’t have a doctrinal statement as such, for they think that beliefs are nothing without actions. So the Underground Manifesto is about values and intentions. This has the advantage of avoiding disagreements about non-core christian beliefs, but it would still be impossible to sign the manifesto if one wasn’t a committed follower of Jesus.

The manifesto starts with Jesus, defines his status as the image of the invisible God, and states: “All of our values flow from what we understand about his character, concerns and the practices of his ministry”.

And so other values are built around Jesus’ teaching on the kingdom of God – values of caring for the poor, simplicity, sharing and giving, Kingdom mission and Biblical justice.

There is a statement about the Bible, and while their views would be more or less conventional evangelicalism, they are expressed much more in action terms of how they will use the Bible. Another statement is about the importance of prayer and dependence on God.

Finally, there are personal values such as humility, zeal and contemplation and caring for each other. All in all, it is a most interesting and compelling statement.

What is a disciple?

The Underground has a well-rounded view of discipleship as they found it in the New Testament. A disciple is one who shares the gospel, seeks justice, repents of both personal and societal sin, hates the evils of racism, sexism and consumerism, loves the poor, lives simply and seeks reconciliation in relationships.

Different to other churches

There are many ways it is apparent that the Underground differs from most Protestant churches, in the western world at any rate.

Most churches focus on the health and development of attendees, and thus are built around activities that go on in the church building. This tends to mean that perhaps 20% of attendees at other churches are actively involved in mission and rest are little more than passive consumers. But in the Underground, everyone is a missionary, and the mission goes on primarily in the microchurches. The central Sunday service is secondary.

This requires a very different approach to leadership. Instead of “rock star leaders”, only servants are allowed to lead. There is no empire-building, but rather serving the community via the microchurches.

Another interesting side benefit is that most churches are competing for market share in the same market – those who want to attend conventional christian worship service. This tends to be a zero sum game – one church’s gains come from another church’s losses. But the Underground is continually developing new areas of mission, as new microchurch leaders begin ministering to a sub group they have been led by God to serve.

Every microchurch is different, ministering to different communities in their city, using appropriate, and generally different, methods. Prospective microchurch leaders are encouraged to innovate, and while there is plenty of support from the central staff, there is very little control.

They have an interesting attitude to critical people. Most churches find critical people difficult because they rock the boat and contest the pastors “vision”. But the Underground encourages critical people to try something different from what they criticise. if it works, then a new ministry is established; if it doesn’t work, then everyone has learned something. They are able to take this approach because their ministry is so diversified, unlike conventional churches where the focus is on the Sunday service and so there is little scope for other ideas and approaches.

While it may look rather haphazard and uncontrolled, there is still a structure of Board, Elders and recognised missionaries.

I’m left wondering why more churches don’t adopt this model, for it engages christians in mission, uses their gifts, reaches out to the wider community and changes peoples lives. I can only think that most ministers are too insecure to try this. Their salary is on the line, they can’t afford to rock the boat and disturb the consumers in the pews who pay the bills. They also probably were never trained for real world ministry, but only for within-church ministry via preaching, administration and pastoral care.

With churches losing numbers, especially among youth and young adults, the Underground’s approach could provide the inspiration that idealistic younger christians need to keep going, and avoid sinking into passivity.

I encourage you all to buy the book Underground Church in Australia, USA or UK, and at the very least, watch the video, Underground People.

« When thoughtful christians begin to doubt
Apologetics is "dangerous" stuff! »