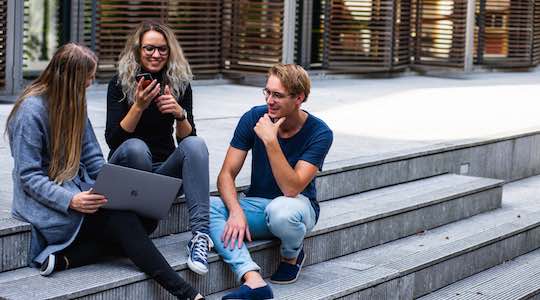 Are you the sort of christian whose faith is built more on reason and evidence than an experience of God?

Do you enjoy answering sceptics’ questions about Jesus and the Bible? Perhaps even enjoy arguing with atheists online?

Have you considered that apologetics might be dangerous for your faith? (Well, sort of! But read on!) Did you know even CS Lewis experienced this?

CS Lewis and the dangers of apologetics

CS Lewis was perhaps the most famous and effective apologist of his age, and he still seems to be influential today. Yet once he reflected that a christian belief never seemed more remote and unbelievable than when he had just successfully defended it.

I have often wondered what exactly he meant. I think it may be that he found focusing on the things unbelievers say can be debilitating because of its negativity.

unkleE and the “dangers” of apologetics

I engage in a certain amount of apologetics, on my other website, Is there a God?, and online. And I agree with what I think CS Lewis was saying. Focusing on criticisms of christian belief and doctrine can make me feel negative, just as focusing on the positives builds faith.

But there is another “danger” that I have found, and I think it is worth sharing.

I think a lot of christian apologetics is ineffective and sometimes even harmful. (I hope mine doesn’t come into either of these categories!) Too often it is based on christian assumptions that can be easily challenged by unbelievers. So it can seem effective to young christians who are taught apologetics in online videos and podcasts, or in their youth groups. The harm can come when they think they have good evidence and arguments and so enter discussions confidently, only to find that their “facts” are easily challenged.

I think this occurs if the apologetics uses christian sources and scholars who are not in the mainstream of academic scholarship and knowledge, and thus can be easily challenged.

Some will say it must be that way, because secular scholarship is anti God. We cannot trust it to tell us truth.

But I think that if we want to communicate, we have to start where people are in their thinking. If they have read, even cursorily, secular scholars, they will be unlikely to accept without question the conclusions of christian scholars.

It is also a matter of integrity. Have we honestly considered all the viewpoints ourselves?

How much of your belief comes from your upbringing and you have never questioned or reviewed it? Could it be that some things you were taught were wrong, or poorly based, or poorly understood?

For these reasons, I do a lot of reading. For a decade now, birthday and Christmas gifts from family have included selected books that assist with understanding the christian faith and presenting reasons for believing. I find more books in my local library, and also subscribe to a number of blogs on relevant topics. Some of all these are by christians, some are not, but as much as I can tell, most are by people expert in their field and providing good, reliable information.

So my reading has included the following topics:

As I have read all this, I have been changed. My understanding has grown and my beliefs have had to adapt. For example:

And so my own beliefs have shifted, not greatly I guess, but significantly. I now feel much more comfortable with questions, doubts and anomalies about the Bible and christian belief. I know that God, Jesus and the Spirit are not lost if the Bible isn’t inerrant.

My faith has actually been enriched.

But I am able to build my case on non-christian scholars. I can reference non-believing New Testament historians such as Maurice Casey, Bart Ehrman or EP Sanders, and in other discussions refer to non-believing scientists such as Martin Rees, Andrew Newberg or Paul Davies, or archaeologist William Dever. Thus I meet non-believers more than halfway and make it harder for them to dismiss my sources as biased.

(I must confess, though, that this approach still often doesn’t work. I have had atheists call non-christians scholars “apologists” because they don’t take as much of an anti-christian line as they would prefer. And I am sometimes mocked for relying so much on scholars. But I think it is still more effective than sticking with known christian writers.)

So beware of the dangers!

So if you want to do apologetics honestly and from a neutral viewpoint, beware!

Your own faith might grow and develop in unexpected ways.

But don’t forget the Holy Spirit

Jesus said the Holy Spirit would guide his disciples into truth (John 16:13). I believe that promise is for us today as it was back then.

So we don’t embark on re-examining our faith on our own. We pray that the Spirit will guide us to new truths and to reinforce old truths. To give us the discernment we need to make good judgments about what are God’s truths for today.

I believe it is no accident that my new understandings of the Old Testament came after several years of praying that God would lead me to truth, and books that would teach me rightly, on several difficult Old Testament matters.

Photo by Buro Millennial from Pexels

« Church for the 21st century?
Evangelism – learning from unbelievers »