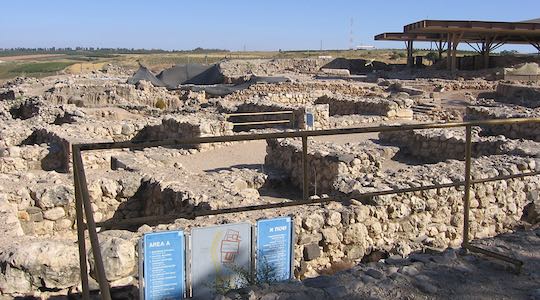 I’m sure you will have read, and heard it said, that archaeology confirms the accuracy of the Bible. But you may also have heard from sceptics that the Bible isn’t historically accurate. So which is true?

This is a complex matter with a wide variety of conclusions among the experts. I have tried to investigate as impartially as I can, and it seems that both views are true (sometimes) …. and false (sometimes).

Here are seven statements I think can be known to be true.

1. Neither archaeology nor Biblical text tell us all we’d like to know

Archaeology has only discovered a small percentage of the material objects that once existed, which themselves are only one aspect of all that happened in the past. Similarly, the Biblical writers recorded only those events and ideas that were relevant to their purpose.

It is therefore obvious that both sources only give us incomplete information which must be interpreted. Some archaeologists (minimalists) dismiss the written record as legend and propaganda rather than history, while some historians (maximalists) are much more willing to accept the Old Testament text as a historical record. If we want to be fair and open-minded, we need to take account of both approaches, but be wary of the more extreme viewpoints.

2. The Bible writers knew about the times and places they wrote about …. mostly

There is plenty of evidence that the Bible writers, from the early Old Testament to the New Testament, generally got a lot of geography and customs right.

However some inaccuracies also occur, principally anachronisms, which probably occurred when stories were handed down orally and updated to be more meaningful to later generations.

This evidence suggests the Bible stories go back to the times in which they are set, but of course it says little about the accuracy of the stories themselves.

3. Most of the good archeological evidence comes since the time of David

Check out the archaeological evidence offered by christian apologists, and you’ll find most of it comes from the first millennium BCE, that is from the time of the monarchy, the exile and return. Before the period of the monarchy, almost all evidence is circumstantial, relating to background information on geography and customs, and it is only after 1000 BCE that we start to get confirmation of Bible characters and events. For example:

The books of the Bible were written at different times, by different authors with different purposes. It is fallacious to say the archaeological confirmation of the historical books of the first millennium BCE demonstrates the accuracy of the books which relate to the second millennium.

But at the same time, it is fair to say that there is good archaeological support for the period of the monarchy, captivity and return. For example (among many examples):

4. We don’t expect many remains from nomadic people

Abraham, Isaac and Jacob are reported to have lived something like 4,000 years ago, and lived a nomadic life moving with their flocks to find pasture. Such people would have lived in tents, not unlike traditional Bedouins today (recognising that most Bedouins today don’t live in the traditional way). Such people didn’t leave behind many artefacts, created no monuments or stone buildings, and left no lasting written records or inscriptions.

It is therefore not surprising that, while we have information on the culture of that time (as described above), we have no confirmation of the events written in the early chapters of the Bible or of the main characters. The most we can reasonably say is that the stories are ancient and are based on a reasonable understanding of the culture, customs and geography.

5. The story of Moses and the Exodus is not well supported by the evidence

Moses is reported to have been a Hebrew who became an Egyptian prince, and later led about 2 million Israelites out of slavery in Egypt, an event which led to the destruction of all or part of the Egyptian army. You’d expect such an event to leave some mark on Egyptian history, and you’d expect if 2 million people camped somewhere for any length of time (as apparently occurred at Kadesh Barnea), they’d leave some trace.

But there is very little, if anything, in Egyptian history that describes these events, and it is difficult even to identify a time in Egyptian history when they took place. Perhaps the Egyptians didn’t record such a disastrous event, but whatever is the case, archaeology tells us virtually nothing about the Israelites in Egypt. However there are indications in the text that show familiarity with Egyptian names and customs, and the Egyptians did have slaves from Mesopotamia, so the story of the Israelites in Egypt isn’t implausible.

The lack of archaeological evidence for the journey across the Sinai and the encampment at Kadesh Barnea is a more serious issue, and the logistics of two million people travelling as a group make at least some aspects of the story doubtful. (If 2 million people travelled 100 abreast, 2 metres apart, the column would be 40 km long, and the last person would set off 10 hours after the first person.)

But there are some indications in the Bible that the numbers were much smaller (e.g. Exodus 23:29-30 and Deuteronomy 7:7 say the Israelites were few in number). If this was the case, then the lack of archaeological evidence would be understandable, and comparable to other historical migrations that have left little or no record.

Scholars are divided about the Exodus. Some think it happened more or less as described, and some think it is entirely fiction, but it appears that most think there is some historical reality behind the stories, but much is legend or exaggeration. A report on a recent conference on the topic concluded there was:

“considerable agreement that an Exodus event or series of events took place on a much smaller scale than the one depicted in the Hebrew Bible”.

These views present a difficulty for christians because the Exodus is one of the major events in Jewish history and a theme often referred to in the New Testament. We’ll look at this issue later.

6. The stories of the conquest of Canaan under Joshua seem to be exaggerated

Some significant archaeological evidence is available for this time period (sometime between 1200 and 1500 BCE), and while there is some support for an invasion, much of the archaeology does not appear to fully support the account in the book of Joshua.

The picture is further confused by the fact that some cities that were apparently captured and destroyed in the early chapters of Joshua, are later in Joshua or Judges said to have not been destroyed, and their inhabitants are still Canaanites. DNA and archaeological evidence suggests that at least some, perhaps most, of the Israelites lived in Canaan all along, and simply moved to less settled areas, perhaps joining a group who did indeed travel from Egypt.

Thus there are various conclusions about Joshua, but perhaps the archaeology supports the fact of a smaller invasion augmented by local Canaanites joining the Israelites. This is such an interesting question that I’ll look at it in more detail in my next post.

The New Testament generally gets it right

We wouldn’t expect an itinerant Jewish teacher, miracle-worker and prophet, nor a small new religion, to leave much in the way of archaeology. And that is generally the case. But several discoveries show that the New Testament often describes the language, culture and people of the time accurately:

Speaking the truth, keeping to the faith

I am an interested non-expert, and can only go by what the majority of the experts say. And I think the evidence leads to these conclusions:

How does this affect faith?

Christians who are dogmatically committed to the inerrancy, or at least historical accuracy, of the Bible, can welcome much of the archaeological information, but where secular experts conclude that an account isn’t fully historical, these christians have to believe that there are reasonable explanations for the apparent anomalies – e.g. locations haven’t been properly identified, dates are different to those currently accepted, etc.

But christians willing to follow the evidence can easily accept that God has revealed himself, not through a perfectly historical document, but through a human document written by people with different purposes than writing dispassionate history. God seems to have been willing to reveal himself through legends, folk tales, sagas and interpreted history, just as CS Lewis has said.

Some christians find this problematic. A particular issue is the Exodus, including the Passover, the giving of the Ten Commandments and the settlement in the “Promised Land”, because it is important for understanding the New Testament. Jesus and the apostles apparently accepted the historicity of these stories, or at least of the characters Moses and Joshua, though they were freer in their interpretation than christians today are.

This is a crucial matter for some christians, but others (including me) have no real problems, as their (our) faith is based entirely on the New Testament, especially the gospels. It seems quite reasonable to believe Moses and Joshua were historical figures though some of the stories about them are legendary and exaggerated, and this presents few problems for me.

I believe we should accept and understand the Bible as it apparently is, and not “require” God to have revealed himself in a way that we think he should. But I understand some christians are uncomfortable with this.

Middle of the road assessments

Photo: archaeological excavations of chambered gate at Hazor ( from the Israelite periodCC BY-SA 2.0, Link). Hazor was one of the leading cities in northern Canaan. The book of Joshua records that its king Jabin was defeated by Joshua, and Hazor burnt to the ground. The book of Judges also records that Jabin of Hazor was defeated by Barak. Some scholars believe the same historical event has been recorded twice. Others believe that neither account is historical. There is evidence in the archaeology of violent destruction and burning which some say verifies the Biblical account, but others say the destruction was the result of civil strife.