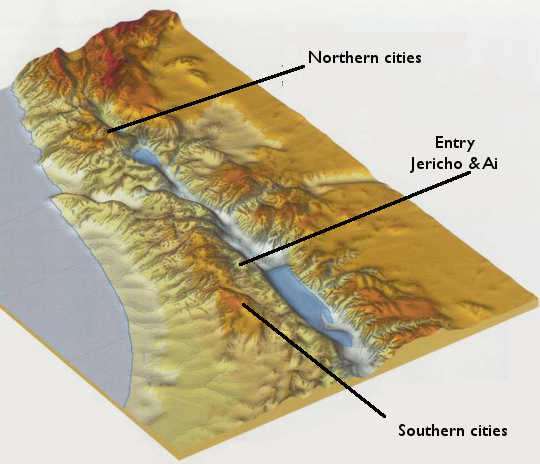 I don’t know about you, but when I read the Old Testament accounts of Joshua and the Israelites invading Canaan, I don’t have any picture of the geography or where the cities were located.

The matter is complicated by the fact that many people feel a lot is at stake. Believers generally want to find support for the Bible, and some unbelievers want to undermine it. Some Jews and Palestinians want to support their rival claims for the land.

So when I read the opinions of historians and archaeologists on whether these events were historical or legendary, I have little on which to base a judgment. I don’t think it’s the most important thing in the world, but it has been interesting to try to ferret out the truth, to read all sides of the question and try to come to an honest and true conclusion.

Geography and the Bible story

The land area known as Canaan in the late second millennium BCE included land on either side of the Jordan River, roughly where Israel, Palestine, Lebanon and Jordan are located today. There were fertile lowlands along the mediterranean in the west, with less fertile highlands in the centre and east, separated by the Jordan valley. The land was populated by diverse Semitic tribes, mostly living in small city states.

The Bible describes the Israelites entering Canaan from the south east, adjacent to the Dead Sea. After some fighting with tribes in the area of Moab, the Israelites crossed the Jordan and successfully attacked and destroyed the fortified cities of Jericho (near the Jordan) and Ai (in the hill country). God is portrayed as giving commands and help for both battles, and for most of those that follow.

The people of Gibeon tricked Joshua into a peace treaty, so their city was not destroyed, but Joshua moved on quickly to defeat armies and capture fortified cities (Makkedah, Libnah, Lachish, Eglon, Hebron and Debir) in the southern hill country. The Bible then records him heading to the far north (almost 200 km away) to capture and destroy the city of Hazor and capture several other cities also. In all, Joshua 12 lists 31 kings who were defeated, and Joshua 11 says (twice): “So Joshua took this entire land.”

Not so fast – a different story

But that isn’t the whole story. Later in the book of Joshua, it is clear that the more fertile coastal lowlands, and several other cities (e.g. Jerusalem, Gezer) had not been captured as claimed earlier. The following book of Judges tells of the different tribes having to subdue Canaanite cities in their allotted areas, including some previously said to have been conquered (e.g. Debir), and in some cases failing to do so. And Samuel and Kings report that some cities (e.g. Megiddo, Jerusalem) were not controlled by the Hebrews until several centuries later.

So the Bible recognises that the conquest was far from complete, despite the strong statements in Joshua. It is almost as if there are two different accounts, a more accurate one later in Joshua, Judges, Samuel and Kings, and an earlier “talked up” account in Joshua 1-11.

It isn’t clear what date should be given to the conquest stories in Joshua. The text of the Bible, when compared to Egyptian history, suggests a date around 1400 BCE. However most scholars these days believe that whatever the accuracy of the account in Joshua, it refers to a time around 1230-1190 BCE.

Up until about this time, which was the end of the Late Bronze Age, the two major powers in the Middle East were Egypt to the south and the Hittites in the north (in modern day Turkey). The boundary of their empires was in Syria, so Canaan had been controlled by Egypt. However the decades either side of 1200 BCE were times of turbulent change as these empires lost all their power, for reasons that are still debated.

Therefore the unrest described by the books of Joshua and Judges fits this time in history. But the more settled Egyptian control and protection in earlier times seems to rule out a major invasion around 1400, although it is quite possible that a smaller group of Semites entered Canaan around this time.

The archaeology also supports the idea that this was a chaotic time of change. Many of the cities mentioned in Joshua were indeed destroyed and often burnt, and many of them (Hazor, Lachish, Debir, Eglon, Bethel) can be dated to around this time. At Hazor, Canaanite figurines were destroyed and typically Israelite pottery began to appear after this time.

An inscription (the Merneptah stele) shows that a people group named Israel was living in Canaan in 1207 BCE. All this lends plausibility to the Bible account.

On the other hand, Ai was a ruin at this time (the name even means “ruin” and it was destroyed almost a millennium earlier) and Jericho was destroyed around 1550 BCE. It is possible that there were small (unfortified) villages on these sites at the end of the Late Bronze Age, but this hardly seems to support the Joshua account. Several other cities said to have been conquered (e.g. Gibeon, Arad, Heshbon) did not apparently exist at this time (though it is always possible that their location hasn’t been correctly determined).

Furthermore, archaeologists think that the cities which were destroyed at this time were not conquered at the same time, as described in Joshua 1-11, but perhaps over a period of half a century or more.

So the archaeology is difficult and more than one interpretation is possible. But it cannot be said to strongly support the account in Joshua 1-11.

It seems that Canaan was more urbanised in the Late Bronze Age, but towards the end of the thirteenth century, there was a move away from cities to smaller villages and towns, many of them in previously unsettled areas, mainly in the hill country and the Negev to the south.

The Canaanites were thought to be agriculturalists living mostly in the fertile lowlands, and the pastoralist Israelites mainly settled in the hill country. But there is also evidence of sophisticated agricultural activity in the highlands, suggesting that some Canaanites from the lowlands may have moved up to new territory.

It therefore seems possible that there was initially less conflict than portrayed in Joshua 1-11, and more like a gradual assimilation of new peoples with sporadic fighting, perhaps more like that depicted in Judges.

A number of different DNA studies show that modern day Jews, Palestinians, Bedouins and Druze are very close genetically. It is therefore argued that the ancient Israelites were not genetically distinguishable from the surrounding Canaanites, thus the Israelite nation resulted from gradual settlement and assimilation rather than conquest.

We have seen that even other parts of the Bible throw doubt on the historicity of a rapid conquest under Joshua. When the archaeological, historical and DNA evidence is also considered, it seems impossible to accept that the account in Joshua 1-11 is completely historically true. Conservative christians and Jews, and maximalist historians argue for a higher degree of accuracy than I believe the evidence warrants.

But on the other hand, even most of the more sceptical historians accept that there are likely some factual memories behind the stories. Israel Finkelstein wrote: “there is no reason why the conquest narrative of the book of Joshua cannot also include folk memories and legends that commemorated this epoch-making historical transformation. They may offer is highly fragmentary glimpses of the violence …. the destruction of cities …. that clearly occurred.”

Many experts take a view between the extremes of minimalism and maximalism, based on the evidence. After all, Joshua describes the geography well, and maps out a plausible campaign of conquest. A number of cities were destroyed around this time, and new settlements begun, and people were indeed on the move. There was a people group named “Israel” in Canaan at the time. The written text is evidence, even if its accuracy must be questioned and we have to choose between different accounts.

So we are left with a range of views, and a layperson like me can only choose somewhere in the middle.

So what actually happened?

It is possible that Joshua invaded in 1400 BCE, but the Israelites didn’t continue to control the whole area and had to re-capture some cities around 1200 BCE. But the archaeological evidence, as it stands, makes this sequence of events unlikely.

We have reason to believe that some Semitic people escaped slavery in Egypt and travelled to Canaan. It seems likely that some Canaanites moved into the hill country from the lowlands or the Negev. And it is almost certain that some Canaanites where already living in the hill country and they weren’t all wiped out. So it seems likely that these three groups formed the genesis of the people who were later known as Jews.

The Bible accounts reflect this somewhat chaotic time and history. The stories in Judges and the second half of Joshua are closer to the reality of a combination of settlement, assimilation and conflict. The immigrants from Egypt possibly brought their belief in Yahweh with them, and this belief battled with the more pagan Canaanite beliefs and practices for centuries before finally winning out.

The more warlike accounts in Joshua 1-11 are almost certainly exaggerated, a practice not at all uncommon at the time, possibly to strengthen the beliefs and culture of Israel and its claim to the land.

We can probably regard the accounts as “fictionalised history” – original true stories and memories that have been re-told, crafted and exaggerated to make a point.

What is the value of the Biblical book of Joshua?

It seems likely that those who compiled and edited Joshua, probably long after the event, had theological and national interest more than historical. The book shows us those beliefs, and forms part of a literary and theological process that took pagan people from a polytheistic nature religion to the monotheism that Jesus was born into.

Joshua is early on in that process, and so its view of God is still very primitive. But it is nevertheless and important part of the journey of progressive revelation, as God begins to reveal himself as a powerful god who would later be recognised as the supreme creator. But there’s not much morality or compassion there yet.

This view of Joshua would be distressing to many christians. But I find it a relief to not have to believe that the God of Jesus really did order such wholesale, slaughter over and over again. And to know that while such slaughter did happen back then, it probably was not as severe and in such large numbers, as the Bible describes, because some of the cities didn’t exist then, or weren’t destroyed.

Treating the book of Joshua as fictionalised history does nothing to my belief or faith in Jesus, and it makes it easier to believe in God, because I don’t have to believe that he was ever warlike and unloving.

Support for an earlier date and the Biblical account:

« Does archaeology show the Bible is true? Seven facts
Today I am grieving »