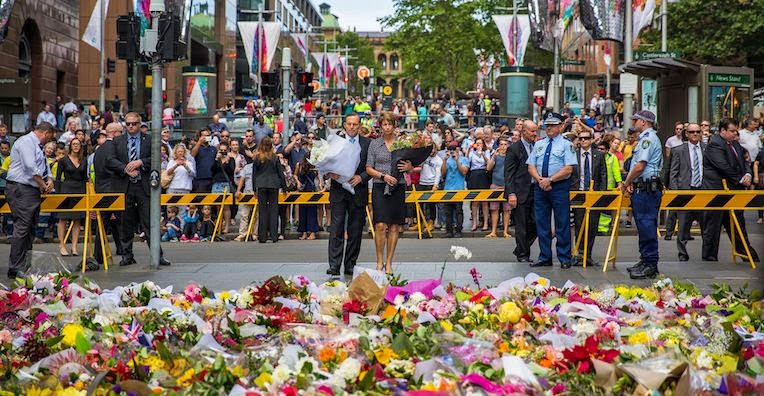 This last week has been a disturbing one for many Australians. A hostage siege in Sydney, that left two hostages and the gunman dead, made a deep impression.

Of course other countries have experienced far worse senseless killing and atrocities. This week has also seen the shooting of about 140 people, mostly school children, in Pakistan and further killings by Boko Haram in Nigeria, as well as ongoing killing in the Middle East and North Africa.

But I want to think for a moment about how people, especially christians, react to such events when they touch us personally.

What happened in Sydney

The events are simple enough to describe. A disaffected Muslim man, awaiting trial for serious sex and accessory to murder charges, took a sawn-off shotgun into a cafe and held 17 people hostage for about 17 hours. I’m not aware of him making any demands, and so far it seems that his actions had little forethought or plan.

Police evacuated the area, made contact with the gunman …. and waited. Several of the hostages escaped, then shortly after midnight, several more of the hostages apparently decided to escape while the gunman was dozing. In the melee, shots were fired, the police entered and the three people died.

All this took place in the centre of the city at a location that would be familiar to most Sydneysiders, and just around the corner from where I used to work. I think this brought it all closer to home for many. 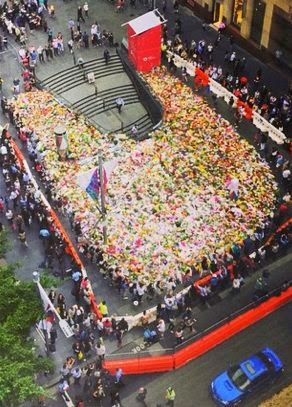 Responses varied. Many Muslim and community leaders hosed down speculation about terrorism (it appears the gunman acted alone and police treated it as a hostage incident, not a terrorism incident) and tried to calm people down. Many people offered support, via #illridewithyou, to Muslim people, especially women whose clothing might indicate their faith and make them the recipient of hateful comments.

Most noticeable was the huge mass of floral tributes to the two hostages who died, covering a large area of the Martin Place pedestrian mall and the entrance to Martin Place station.

But there were those who took the opportunity to inflame possible religious and racial tension. There have already been Australians suggesting boycotting businesses that produce halal meat (I don’t know why) and banning the burqa or hijab. The Sydney Daily Telegraph, a Rupert Murdoch-owned newspaper already notorious for its bias and disregard for facts, hurriedly released a special edition with lurid headlines, with many of its “facts” being shown later to be in error.

Some Aussies seem to find it easy to get caught up in anti-Muslim attitudes. This is understandable – we all, after all, want to protect those we love, and the free society we are so blessed to be part of.

And it would be foolish to disregard the possible threats that militant Islam poses to our generally peaceful society. Most Muslim immigrants to Australia come from the Middle East, which has been war-torn and had a culture of violence for a long time, and some bring aggressive and anti-western attitudes with them. Sometimes these attitudes are provoked by the difficulties they find settling here – finding jobs, gaining acceptance and feeling alienated.

But this clearly is the minority. Most Muslims come to Australia to flee all that, and most seem to want to be part of Australian culture. Like the previous waves of immigrants to Australia – first British, then other Europeans, then Asians, now from the Middle East – Muslims bring new vitality and culture to an already cosmopolitan and pluralistic country. In the long run, both we and they will be enriched, but there will of course be teething problems.

So acceptance, friendship and tolerance, with awareness of possible problems, seems to be the best approach, and that is the one many Aussies adopt – but not all.

Jesus taught us to love sacrificially, even if it kills us like it killed him. It’s not an easy teaching and it needs to be balanced by other teachings to care for the vulnerable and our kin. But we who follow Jesus cannot ignore it either.

Many christians, unfortunately, don’t seem willing or able to put aside fears and to respond in the way Jesus urged on us. They appear to see Muslims, or perhaps Islam, as “the enemy”. And so they can respond fearfully, angrily or defensively.

But God’s spirit doesn’t make us fearful (2 Timothy 1:7), but gives us power, love and self-discipline. So how do we get there from here?

From fear to love

“Out of the overflow of the heart the mouth speaks”

Our words often betray our thoughts. If we make angry or unfriendly comments, even on something as trivial as Facebook, it shows our hearts are not right and our motives are not honouring to Jesus. There are times to be quiet and to think again.

“the one who is in you is greater than the one who is in the world” (1 John 4:4). Trusting in God is no guarantee that we won’t be harmed and won’t suffer, but it means we don’t have to be fearful. The Holy Spirit in us is strong.

Where do we get our security and significance?

Everyone needs to feel secure and significant in who they are. We can look for security by isolating ourselves from threats, but that makes it hard to love others as Jesus calls us to do. Our security is in God, and it is important to keep reminding ourselves of that. Of course we take prudent precautions, but ultimately they aren’t true security.

Don’t fight anything with skin

“Our struggle is not against flesh and blood” (Ephesians 6:12) and “the weapons we fight with are not the weapons of the world” (2 Corinthians 10:4). We shouldn’t see people as enemies. Our enemies are “principalities and powers, whether we interpret that in a spiritual sense or in terms of human power structures.

“perfect love drives out fear” (1 John 4:18). If we know God’s love for us, expressed through Jesus even though it cost him his life, we can offer that love to others – including Muslims. We are in the business of reconciliation through love, and we shouldn’t be deterred by fear.

Live in the opposite spirit

I learned this principle many years ago from Dean Sherman. If the prevailing mood is one of fear, we christians need to live opposite to that. If our society is unfriendly to newcomers, we need to go out of our way to be welcoming. If discussions become angry, we must be calm and courteous.

Our actions help build the way we think. If we act as a neighbour to someone who we are tempted to mistrust, we may build a friendship …. and trust.

Isaiah called Jesus the “Prince of peace”. We obtain peace with God when we receive forgiveness in Jesus. But the peace doesn’t end there. We are called to be peacemakers.

This year at Christmas is not a time to be fearful or unduly mistrustful, but a time to spread peace.

« Interfaith cooperation: compromising the gospel?
The government shall be upon his shoulders? »