The world seems to be beyond horrific at the moment. Civil wars in Nigeria, Sudan and Ukraine as well as fighting in the Middle East in Syria, Gaza and Iraq. Grossly inhumane treatment of ordinary people by militias, rebels, terrorists and governments.

Surely there is something for christians to learn from all this?

We in the west recoil from the callous actions of combatants in the Middle East:

It is natural to be aghast at this wanton killing, the disregard for civilian life, and sometimes the deliberate targeting, execution and torture of civilians. Fairly or unfairly, Islam appears in a very unfavourable light in many of these incidents – it is hard to believe many of these fighters believe in a God worthy of any respect or worship.

But christianity doesn’t escape unscathed. Western countries have been complicit in much of this, for motives that vary from defensible to spurious.

After World War 1, the Ottoman Empire broke up, and Palestine was left in control of Britain. Sporadic fighting broke out between the Jews and Palestinians, and Jews and the British, and eventually Britain and the UN decided the country should be divided. No doubt the Holocaust during WW2 contributed to this choice. And so the modern state of Israel was born.

Unfortunately the creation of Israel displaced many Palestinians, resulting in some killings by both sides. Arab forces from neighbouring countries invaded but were repulsed. However they continued to try to overcome Israel in several subsequent wars. Israel made things worse by enlarging its territory, condemning the Palestinians to a smaller area and creating more refugees.

Undoubtedly both Palestinians and Israel have legitimate complaints against each other and both are at fault. But the decisions of Britain and the UN leading to the final outcome which discriminated against many Palestinians, were also a cause.

The decision by the “coalition of the willing” to invade Iraq in 2003 and depose Saddam Hussein was supposedly aimed at removing ‘weapons of mass destruction’ (WMDs), fighting international terrorism and bringing democracy and freedom to the oppressed Iraqi people.

It seems fair to say that none of these goals were achieved – there were no WMDs, the war has probably increased terrorism, and it is hard to see how the Iraqi people are safer or freer than before. All this at a cost to all combatants of hundreds of thousands of lives and something like two trillion dollars, with a similar amount to be spent in the future on medical costs and interest payments on borrowings to finance the war.

There can be little doubt that the war was a terrible blunder, creating instability that has led to the present situation in Iraq and making life much more difficult for christians in the country. Had the same money been spent constructively in the region, the world might be a very different place.

A series of coups in Afghanistan in the 1970s culminating in a Communist regime, led to interference by both Russia and the US. Russia invaded in 1979 and the US began to support and fund the mujahideen resistance groups. Billions of dollars were channelled through Pakistan to arm and train the resistance.

Russia withdrew in 1989, but many believe the US funding assisted to the rise of the Taliban by arming and training many of its fighters. The Taliban ruled Afghanistan from 1996 until 2001, when US-led forces overthrew them. The country has not been really stable, united or safe since.

The cost of the war, to all combatants and civilians, is possibly about 50,000 deaths and $1-2 trillion, so far, with further expenses in interest payments and medical costs. It remains to be seen how effective the Afghan government will be, and whether the Taliban will regain control when the western troops leave.

The civil war in Syria has seen limited involvement by western nations, who have tended to side with the rebels. Future involvement on the ground doesn’t appear likely, but aid to arm the rebels is proposed by the US.

US and allies play the role of policeman

Wikipedia shows that the US has been involved in over 30 actions in foreign countries, including covert actions to change regimes on 13 occasions since 1949. Australia, UK and other allies have participated in many of these operations and wars.

Many of these interventions have been unlawful, many have been ultimately unsuccessful. Many have cost many lives, some have led to worse situations, and many have involved questionable practices including torture, showing apparent disregard by US and allies for the rule of international law and the value of human life. For example, the US ‘war on terror’ in response to the September 11 attacks has cost 300 times the number of lives lost in those attacks!

Do we understand an honour culture?

Western actions in many of these cases seem to show little understanding of the honour-shame culture of the Middle East. In the west we tend to think of right vs wrong, but Muslims are more likely to think in terms of honour and shame, which means that they may respond to situations in ways we would regard as futile and detrimental to their own best interests. But death may be preferable to shame.

Thus it may be silly to think that strong force against Hamas will eventually stop the rockets. Strong force may only provoke more rockets in response as the only way to avoid shame. Israel must surely know this, but sometimes I think western responses will only have any chance of success if they offer an honourable way out for all combatants.

With all this background, a christian response seems clear. Jesus taught non-violence – loving enemies, praying for persecutors and turning the other cheek. We can argue whether this means total pacifism or whether other parts of the bible allow war in some circumstances.

But the disregard for (foreign) human life, the willingness to go to war to achieve questionable and often unachievable aims, and the use of violence before all other options have been exhausted, must surely be contrary to Jesus’ teachings. And so often the violent response has not produced peace, only more violence, as we know it must.

Surely the default position for christians must be to oppose violent resolution of international differences, and to refuse to vote for bellicose politicians. If we ever support war, it must be after much prayer and with great trembling.

How can christians be warlike?

The Bradford University Department of Peace Studies judged the 2003 Gulf War, on the basis of US rhetoric, to be a ‘religious war’. All that killing and damage was judged to have been done in the name of Jesus!

Somehow christians, in the US at least, have confused religion with patriotism, or even placed patriotism above following Jesus. Somehow they believed God was on their side, in this war and generally. Fortunately, christians elsewhere, certainly in Australia, were generally opposed to the war.

Christians also often support Israel uncritically, blaming Hamas for all the killing when clearly there have been injustices against the Palestinians too. (For two excellent christian reactions to the present fighting in Gaza, see Apocalyptic Israel Worship Will Be the Death of Us All and The Difference Between Palestinian Rockets and Israeli Bombs.)

Some christians see Middle Eastern conflicts as necessary war between Christianity and Islam, despite Paul’s teaching that “we don’t wrestle with flesh and blood” (Ephesians 6:12). 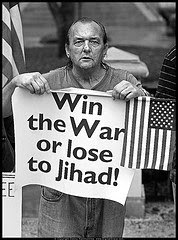 Surely we need to learn that:

I suggest we need to repent of our support for actions which I cannot believe Jesus would ever condone, pray for our leaders and vote for those who promote peace, pray for those poor people still suffering in all the conflicts and do what we can to contribute to helping them.

“Dear children, let us not love with words or speech but with actions and in truth.”

« The surprise of finding the Bible isn't exactly what we thought it was
How could some Jews believe Jesus was God? »