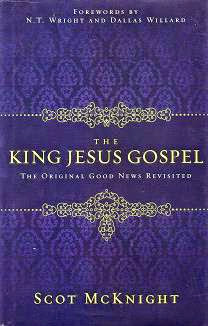 Last week (Close to understanding Jesus?) I outlined how I came to see that much of the evangelical teaching I had received about Jesus didn’t really explain Jesus and his ministry in accurate terms historically.

It seems that many people are coming to similar conclusions, for example New Testament scholar NT Wright and the philosopher, the late Dallas Willard.

New Testament scholar and theologian, Scot McKnight’s 2011 book, The King Jesus Gospel, takes up the same theme, but from a theological rather than historical perspective. So I guess it is hardly surprising that Wright and Willard both contributed Forewords.

For many evangelical christians, the gospel is justification by faith – the good news that God offers us salvation through his son, Jesus Christ. This book suggests that many christians and churches need to enlarge their understanding of ‘the gospel’.

McKnight believes in justification by faith, but he believes the New Testament show us that the gospel is much more than personal salvation.

The word gospel translates the Greek word euangelion, which isn’t an offer of personal salvation, but an announcement. And the announcement Jesus made was that the kingdom of God was now breaking into history, and he was the Messiah, the king, and the judge. The long story of the Old Testament, with its promises of restoration, was now completed or fulfilled in him.

So the life of Jesus, in its entirety is the good news. That is why the four biographies of Jesus are themselves called “gospels” – because they are indeed the gospel.

The gospel the apostles taught

McKnight argues that Paul and Peter taught the same gospel, and analyses Paul’s letters, and his and Peter’s speeches in Acts, to demonstrate this. For example:

McKnight summarises the apostolic gospel in this way:

If all this is true, how should we change our evangelism? McKnight makes a number of suggestions:

This is clearly an important message, and one which will inevitably be controversial within evangelical christianity. I think McKnight is right about most of this, and his emphasis on the Lordship of Jesus instead of personal salvation has significant positives:

But I have some reservations

Granted my reservations, this is still an important book. It contains many good insights and provides a necessary perspective on the New Testament. It is well worth reading.

« I'm a guest blogger
"An intangible narrative of unreachable worlds" »