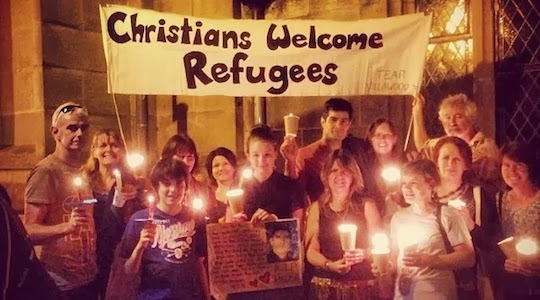 Two posts back I wrote about my feelings of shame regarding Australia’s treatment of refugees seeking asylum who try to reach Australia by boat.

But what is a ‘right’ christian response? Is there any ‘right’ response?

The nature of the problem

Welcoming refugees to our country instead of making it almost impossible for them through tortuous treatment would have some implications for us as a country:

Some see these implications as serious problems; others see them as minor. Who is right?

This is a cliched question, but I think we probably have to ask it.

The sermon on the mount

This collection of Jesus’ sayings contains many radical statements about how we should be willing to give up our own rights and possessions to benefit others, for example:

I think there is little doubt that Jesus would want us to be willing to give whatever it takes to help genuine refugees fleeing for their lives.

His brother James too

The teaching is clear, but dare we believe it?

There is no real difficulty in understanding these passages. The terrible thing is deciding how we should obey them.

This isn’t a simple question. Jesus often used hyperbole (casting mountains into the sea, plucking out eyes, etc), so we can rightly question whether all these passages are meant to be taken absolutely literally. But on the other hand, we are comfortable and can easily take the easy way out and explain these teachings away.

But however we explain them, they don’t mean nothing. So I can’t see how we can avoid the conclusion that protecting our own comfort and wealth is not a sufficient reason to turn back refugees. Even if there are risks attached, selfless love is what is required of us.

Meanwhile, back in the real world

But we don’t live in a christian country, and the majority do not share our views, and we cannot expect them to. Advocating for totally selfless acceptance, even if we believe that ourselves, is not going to get us anywhere.

What, practically can we aim for?

Many other countries also receive asylum seekers and most do much better than us – they spend less, they act quickly and they respect humanity. We can learn from them, and from studies that have investigated effective approaches.

Our present procedures are designed to abuse people, to reduce the incentive to make the trip. Even children are victimised and brutalised. This is inhumane and contrary to international conventions and all standards of decency. We cannot have this on our national conscience, and we should be should be pressing for humane treatment, even if this is less of a deterrent.

If we are determined to harden our hearts and refuse entry to desperate people, for whatever reason, let’s at least be honest about it. Instead of brutal deterrent, let’s just say we don’t want them and send them straight back. I don’t agree with that policy, but at least it would be honest and would stop the inhumane indefinite incarceration.

Speed up the process

Refugees can be in detention for years and end up with mental illnesses and no hope. We should speed up our processing, make quicker decisions and then take the appropriate action.

In Australia, out of detention

Studies have shown that few asylum seekers abuse the system if they are given the opportunity to live in the community under careful conditions until their claim is assessed – because they want to stay, they generally comply. If we have to detain, let us do our own dirty work and house the detainees in Australia, preferably in the community – and there is even a handbook to guide this.

Other countries accept far more refugees in total or per capita than we do. Most have more humane policies – for example Sweden, USA, UK, Canada and Denmark and a bunch of other countries.

Adopting some of the above approaches (an approach supported by Vinnies and many others) would allow us to respect ourselves again and would save billions of dollars.

Saving money by introducing more humane treatment would allow us to pursue options other than discouraging people by abusing them. We could start to address the real problems causing this flow of boat refugees.

Improve opportunities to apply for refugee status before reaching Australia

It isn’t always possible or safe for refugees to apply for re-settlement from their own countries and so they flee their country and hope to be accepted when (if) they get here. Some of the money saved by the above measures could be used to establish or improve UNHCR processing centres in the main countries of origin, or in countries along the way, especially Indonesia.

Some (e.g. Richard Ackland, Australian Greens and Amnesty International) suggest that such an agreement with Indonesia, perhaps also with some provisions to apprehend so-called ‘people smugglers’, could be the best long term option.

There must also be opportunities to assist in improving conditions in the main countries of origin, by promoting reconciliation and improving life for minority groups, as suggested by these experts in medicine and psychiatry. The intransigence of groups like the Taliban mean this can only be a partial, and very long term, solution, but it surely is important.

We can’t be naive about this. The inhumane treatment is carefully designed to abuse and deter. If we take a more humane course, refugee arrivals and claims will increase. Many people, and the Murdoch press, will not like it.

But do we really have a choice? Social analyst Hugh Mackay makes a strong argument that we are dehumanising ourselves in an unacceptable way by the present policies:

if we fall for the mad idea that we can behave badly in pursuit of a good goal – then we have compromised our own integrity and tarnished the very values we are claiming to uphold.
If you embrace the idea that the end justifies the means, then you’ll be stuck with accepting torture as a legitimate way of extracting useful information. ….. Is that us? Is that the moral framework Australians want our governments to adopt when dealing with hapless souls who arrive here, by whatever means, as asylum seekers?”

A long time ago we set the dial at brutal and we’ve kept it there. That’s hard to face. It goes against our deepest sense of ourselves. …. But while a slew of inquires ask what happened on Manus it might be time for Australians to start asking: what have we become?”

Almost anything would be better than what we are now perpetrating. We are in serious danger of “gaining the world but losing our soul”.

« If you don't laugh, you cry!
Book review: 'I love Jesus and I accept evolution' by Denis Lamoureux »