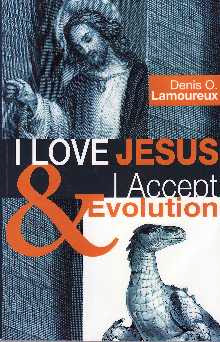 Last year I posted about how christians are gradually becoming more accepting of the theory of evolution.

As part of that post, I reviewed the work of Denis Lamoureux, Associate Professor of Science and Religion at the University of Alberta in Canada, based on some online slideshow teachings he has produced.

I have now read his book on the same subject. What’s it like?

More of the same

I really appreciated Denis’ online teaching – it was clear and thoughtful, and he came across as a likeable person. The book has the same qualities and covers much the same territory, only in significantly more detail.

The main themes of the book are:

A clever and knowledgable approach

Denis knows that what he writes about evolution will be difficult for many christians, especially in the US where young earth creationism is strongest, so he approaches the topic cleverly and with expertise (he has PhDs in both Old Testament theology and evolutionary science).

It’s not an either-or choice

He begins his argument by defining 5 different approaches to human origins, to show that it isn’t a black and white choice between Godless evolution and Godly 6-day creationism. He calls his choice “evolutionary creation”, which he regards as a more accurate term than “theistic evolution”.

What the Bible says

Before he begins to look at the science, he examines the Old Testament, and shows that:

Thus he establishes his basis from the Biblical text itself, making it more difficult for those who disagree to write him off as ‘unbiblical’.

The evidence of science

Then he looks at the science, making the following points:

Lamoureux addresses the obvious difficulties with his ‘evolutionary creation’ approach – the image of God in humans, original sin, the sin-death problem and why did God choose evolution as his means of creation? I have long thought that original sin, as understood by many christians, was a quite unjustified doctrine, and I am pleased to see that Lamoureux comes to a similar conclusion.

He points out that coming to belief in evolution (after years as a creationist) has not weakened his faith, caused to him love Jesus less or caused him to read and value the Bible any less. This is obvious from the book and the online talks – I think of all ‘intellectuals’ or academics I have read in the last few years, Lamoureux is probably the most clearly devoted to Jesus.

I have already alluded to some of the book’s strengths – easy readability, well-explained ideas, authoritative expertise, sensitive treatment of issues some christians may find difficult, and an approach which establishes his main points from the Bible before he addresses the science. The reader gets good information quickly, making the book well worth reading.

However I found it sometimes a little repetitive, as Lamoureux kept reinforcing his points, and I was a little put off by his insistence that while Genesis used ancient science (cosmology, biology and anthropology) it taught spiritual truths inerrantly. I suppose he felt this was a necessary emphasis for sceptical christian readers, but it makes me wonder:

But these are relatively minor criticisms. If you are at all interested in evolution vs creationism, this book is well worth a read.