Long before European invaders and settlers arrived in Australia in 1788, the aboriginal people had occupied this continent and developed a culture and lifestyle that could sustain them in some harsh environments.

A fascinating recent ABC documentary, First Footprints, gave a deeper insight into the lives of these pioneers.

A brief history of Australian settlement

DNA and archaeological studies indicate that modern humans migrated out of Africa, along the shores of the Indian Ocean, eventually reaching the end of land in modern Indonesia about 60,000 years ago. Here ancestors of the Australian aborigines made the sea journey to the north coast of Australia.

Thousands of pieces of rock art, preserved because of the low rainfall and weathering, remain for us today as evidence of their life and culture – drawings of now extinct megafauna, native animals, people, ceremonies and perhaps the first human faces ever found – about 30,000 years ago.

One amazing location is Narwala Gabarnmang in Arnhem Land in northern Australia, where outcropping sandstone has been hollowed out over millennia to create large rock shelters with the roof held up by columns of the remaining rock. The ceiling and walls of these shelters are decorated with amazingly intricate art. 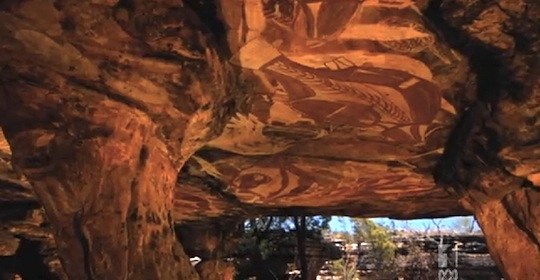 Lake Mungo in western NSW was once a source of water and fish for aboriginal people, but is now desert. Archaeological excavations have revealed a skeleton of a man aged about 50 and laid to rest with his hands crossed, and then sprinkled with red ochre, and the cremation remains of a woman, both dated to about 42,000 years ago. Mungo Man (pictured above) is said to be one of the earliest known skeletons outside Africa, and these two remains are believed to be among the earliest known evidences of funeral rituals.

The dates given for this early settlement of Australia, and of the cave paintings and burials, have been obtained by several different dating methods, argued about, and now generally agreed. This makes these early aboriginal settlers contemporary with Neanderthals in Europe, and some of their artefacts (like sharpened stone axes) among the oldest in the world. The carved rock shelter at Narwala Gabarnmang is dated about 25,000 years before Stonehenge.

It is hard to doubt the antiquity of these artefacts and remains, or of the landscapes they are found in. Yet even this long ago, there is evidence of some form of spirituality or awareness of the possibility of life after death.

I am fascinated by ancient and pre-history, especially in Europe and Australia. I accept the findings of the anthropologists and archaeologists, even though I know some are likely to be revised a little as new information is discovered.

But these discoveries have significant implications for christians who believe in a young earth. If the earth is young as some creationists believe, it is hard to see how there was time for all this settlement to occur, culture to develop and age, and rock shelters to be carved out and painted.

I cannot see how belief in a young earth can be maintained. And the apparently spiritual beliefs of these people suggest that the God who loved them as much as he loves us, must have been active in some way in their culture.

I encourage you, if you have any interest in this at all, to view the first episode of First Footprints on ABC iView, or, if you can’t get that where you live, on Youtube. You surely won’t regret it.

You can also read more about Mungo Man and Mungo Lady.

« Universalism is the new black?
Church as a community of people »