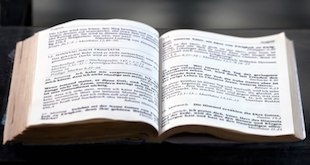 Another common argument used against christian belief is that the New Testament is unreliable and historically inaccurate. The argument focuses on a number of apparent inconsistencies in the gospel accounts, which, it is said, make the accounts unbelievable.

Is there any substance to these claims?

We can rule out a number of things that may appear to us to be inconsistent:

More of a problem

Many apparent inconsistencies have been pointed out. I will outline several of the most discussed cases, as an indication of how christians might approach them.

Jesus’ birth is recorded only in Matthew and Luke, and the two stories have some major differences, though no clearcut contradictions. Critics have suggested the following anomalies:

Overall, there is not much for christians to worry about here. Those who believe the Bible is without error can plausibly believe that everything can be harmonised. Those who don’t can accept what the scholars say without much problem.

Bethlehem and Nazareth both feature prominently in the gospels, but some have claimed that neither place existed as a village in Jesus’ time.

These examples show the folly of arguing from a lack of archeological evidence.

The three synoptic gospels (Matthew, Mark & Luke) tell the story of an exorcism by Jesus which resulted in a herd of pigs rushing into the sea. However there are some notable differences in their accounts:

Both cities are located some distance from the Sea of Galilee, which some claim is a clear error. But since the gospels say it was in the territory, not the city, this is not a correct claim. But the different locations in the texts remain to be explained. Perhaps they were all originally one or the other, but there was a copying error early on and this has been carried forwards – this seems quite possible since there are so many variant readings. But as they stand, the accounts differ, although it hardly seems like a major problem.

Again, the scholars are divided. Some say there is a genuine discrepancy, with John changing the days and reporting different details to make theological points. But others argue that Jesus had two meals with his disciples (not uncommon during Passover), which explains some of the differences in the accounts, and that John also says Jesus was crucified on Friday, if his times and dates are understood correctly.

So there seems little to be concerned about here also. Both Biblical inerrantists and other christians can explain the gospel stories adequately. (For a discussion of each view, see chapter 2 of Bart Ehrman’s Jesus Interrupted, and Ben Witherington’s critique.)

The resurrection stories in the four gospels, plus a reference in Paul’s letter to the Corinthians, present a variety of stories, with details that seem difficult to harmonise. For example:

Scholars are not fazed by these differences.They say that when witnesses agree on the main facts but differ on the details, it means they have not collaborated or copied, and the truth of the main facts is more assured. And so most scholars believe that the story of the empty tomb and the appearances of Jesus are historical, whether they believe Jesus was really resurrected or not. They find it less important whether the details are all correct, and many believe the events were so confusing and unexpected that the disciples memories are unreliable. This is enough for many christians.

Those who believe the Bible is without error have a tougher time trying to harmonise the various accounts, and many scholars say it can’t be done. But New Testament scholar John Wenham has been able to write a convincing account that fits in all the details (see The resurrection). He said it wasn’t necessarily a correct reconstruction, but it showed it could be done – and it was convincing to me.

It seems to me that the problems with the historical accuracy of the New Testament are sometimes overstated. It is true that there are many unresolved difficulties, and scholars generally think there are genuine errors there. But these apparent errors don’t seriously undermine the historical value of the New Testament, and don’t prevent even sceptical scholars from concluding that we can know a good deal about Jesus.

Those who hold to Biblical inerrancy have a harder time of it. Most discrepancies can be explained, although the explanations may seem strained to many, and I find it difficult to think that every one of them can be resolved reasonably.

I personally think it is safer to accept the scholars’ conclusions as a common basis for discussing with sceptics, while believing that we can trust the New Testament writers for more than the minimum allowed for by the scholars. This allows me to be faithful to the best historical research while not being overly sceptical. It also simplifies discussions with sceptics because it eliminates many of the less important arguments and allows me to focus on what is most important – which can be built on what the mainstream scholars confirm.