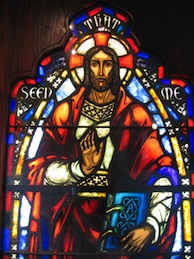 Bart Ehrman, a respected New Testament scholar who is not a christian, has recently written:

“Jesus is best understood as a Jewish apocalypticist from the backwaters of a rural part of the Roman empire, a Jewish preacher who got on the wrong side of the law and was executed for crimes against the state, how is it that within sixty years of his death his followers were saying that he was a divine being? And that within 150 years they were saying that he was the second member of the Trinity?”

What are christians to make of this?

Ehrman doesn’t believe Jesus was God’s son. He is arguing that the earliest evidence for Jesus portrays a human teacher and prophet, but the later christian documents show progression to the point where he is seen as divine. Could he be right?

A growing understanding of Jesus

But Jesus had more to reveal, that he was in fact the incarnation of God himself. But he did this gradually, because it was such a difficult teaching for a fiercely monotheistic Jew. (Note that the title ‘son of God’ did not necessarily make a claim to divinity, as kings were commonly referred to in such a way.) His divinity is implicit in some of his sayings and actions (see Jesus – son of God?), but his disciples didn’t always recognise this.

So when Jesus left them, they definitely weren’t yet fully understanding Jesus or the mission he was giving to them. It therefore isn’t surprising that Jesus continued to teach them after his resurrection (Luke 24:25-27), and promised that the Holy Spirit would reveal more in the future (John 14:26, 15:26, 16:13).

So it seems clear that the Holy Spirit continued to teach them in the days after Pentecost. We can see this in the story of Peter and Cornelius, in Acts 10, when the Spirit taught Peter, and eventually the whole church, an important lesson about the mission to the gentiles which was not easy for Jews to accept.

The divinity of Jesus

The earliest example of the apostles’ preaching is the day of Pentecost (Acts 2), when Peter began teaching that Jesus was the Messiah, but concluded: “God has made this Jesus, whom you crucified, both Lord and Messiah.” The Greek word translated ‘Lord’ could refer to a king or to Caesar (Wikipedia), but was also used to translate the Hebrew Yahweh, so Peter’s use is not clear. But it certainly indicates an exalted status, and seems to indicate at least a move towards recognising Jesus’ divinity. Peter’s words “God has made this Jesus … Lord” fall short of later teachings that Jesus was the eternal son of God, and suggest his understanding of Jesus was not yet complete.

Calling Jesus “Lord” continues through Acts (e.g. 9:17, 10:36, 11:17, 15:26, etc), and the disciples heal, baptise and preach in Jesus’ name, suggesting that his name was already venerated. By the time Paul began to write his letters, Jesus was recognised as a divine being from before the dawn of time (Colossians 1:15-17, Philippians 2:6), and Paul’s use of creeds and hymns show that he wasn’t the first to do this (see New Testament Chronology and Christian Origins). The exalted view of Jesus finds its full expression in the prologue to John’s gospel (John 1: 1-14), probably the last New Testament book to be written.

“The treatment of Jesus as in some sense associated with God in some kind of special way seems to be there in the earliest evidence we have.”

The doctrine of the Trinity, that defines Jesus’ relationship to God the Father was not developed for some time after the New Testament was written, but is based on hints within Paul’s writings (e.g. 1 Thessalonians 1:1, Galatians 1:3, 1 Corinthians 12:4-6).

It seems there may have been a period after Jesus’ resurrection when the apostles were unclear about Jesus’ divine status, but worship of Jesus as divine seems to have begun within a decade or two of Jesus’ death and resurrection.

It will be interesting to see what evidence Bart Ehrman brings forward to support his idea that it took 6 decades.