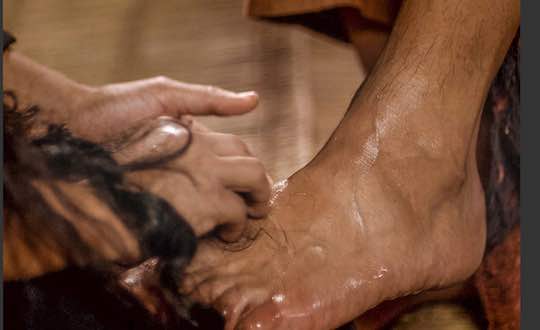 The facts about Jesus are clearly stated in the gospels, and they don’t change, but people have so many different understandings of him. The Catholic Jesus or Orthodox Jesus is not the same as the evangelical Protestant Jesus, or the Jesus of liberal Protestant theologians.

I think there is probably some truth in all portraits, including that Jesus was a prophet, and a social and religious radical. Nothing shows this more than his treatment of women and social outcasts.

As Simon the Pharisee discovered when he invited Jesus to a banquet and discussion …..

Banquets and social interaction in a Middle Eastern culture

Luke (as recorded in Luke 7:36-50) says this story occurred in a “town”, which could have been a settlement of anywhere between 500 and 3,000 people, living in houses packed close together.

This was an “honour” culture, where certain niceties were imperative if one wanted to preserve ones honour. For example, if an eminent visitor was in the town or village, hospitality would be offered by one of the prominent men, as a matter of honour, on behalf of the whole village. If the visitor was a rabbi, the host would be deeply honoured to offer hospitality.

When the honoured guest arrived, at least three courtesies would be offered – a kiss of greeting, water for his feet, and olive oil to wash and anoint himself. The guest would be offered a prominent place at the feast and presented with the best food.

Honour also required that the wealthy man hosting the banquet would offer charity to the poor of the village, and so some of the poor might also be present at the feast, though of course not given a place or the best food.

Simon invited Jesus, who was travelling through the town, to dine with him. He recognised Jesus as a prophet and rabbi, and as a deeply pious Pharisee, possibly wanted to test this young rabbi’s teachings. Yet Simon omitted the customary courtesies, which could not have been an oversight, and must be seen as a deliberate insult to an honoured guest.

A woman, known in that town as a “sinner” (presumably a prostitute), came to Simon’s house, apparently having received grace and forgiveness from Jesus earlier in the day. Wanting to show her thanks, she brought perfume to anoint him. She didn’t bring water and a towel as she would naturally have expected Simon to provide this courtesy.

But when she saw the man she was so thankful to insulted so deliberately, she was moved to tears. And she apparently spontaneously decided to offer the courtesies herself by washing Jesus’ feet with her tears and drying with her hair.

In that culture, a woman’s hair was seen as sexually provocative, and accordingly a respectable woman was never seen in public with her hair uncovered, but only unveiled for husband on their wedding night. In addition, honourable men and women would not have touched or even spoken in public. Failure to follow these customs was sufficient grounds for divorce according to many rabbis.

So Simon would have expected Jesus to be offended by this woman’s actions. Instead Jesus defends her. This would have been highly unusual for a rabbi, and Simon is himself offended when this supposed prophet doesn’t respond to preserve his own honour. But this was in keeping with Jesus’ mission to the poor, the marginalised and the powerless.

“he will judge the poor fairly and defend the rights of the helpless” (Isaiah 11:4)

“The Spirit of the Lord is upon me, because he has chosen me to bring good news to the poor. He has sent me to proclaim liberty to the captives …. to set free the oppressed.” (Luke 4:18).

“Simon, I have something to tell you” Jesus says, which carries the unspoken meaning of “I am about to tell you something you won’t want to hear”.

In the the parable, two people owe money, one a small amount, one a large amount. In the Jewish culture at the time, “debts” could refer to money or sins (as can be seen in the different translations of the Lord’s Prayer), and so “forgive” can also refer to remit a monetary debt or sin. Several of Jesus’ parables make this connection, and often the creditor is referring to God, who alone can forgive sins.

So in Jesus’ little story, the creditor could easily be seen as God. Jesus’ question to Simon (which one will love the creditor more?) has only one answer, and Simon has little choice but to agree that the one who is forgiven more will love more.

Jesus’ words are “hard steel” as he draws attention to the woman and to Simon, and contrasts their behaviour. Yes the woman is a sinner but she has responded to grace with thanks. But YOU are a sinner too, but you have responded with insults, indicating that you haven’t received the forgiveness that you need just as she does.

And so Jesus reassures the despised woman: “Your sins are forgiven. Your faith has saved you; go in peace.” We are not told Simon’s final response, but the last we hear, he and the other attendees were not happy.

Jesus teaches us five remarkable lessons in this little incident.

1. From sin to forgiveness

The focus of the parable shifted quickly from sin to forgiveness. Jesus wasn’t interested in condemning, but in forgiving. Grace overcomes dishonour.

2. Jesus is not patriarchal

In a patriarchal society, women had fewer rights and were certainly not equal to men. In two stories in the gospels, the woman is condemned for sexual sin but the condemnation of her male partners is nowhere mentioned. In contrast, Jesus treated this woman with compassion and respect, allowing her to touch him without dishonouring her, and speaking words of life to her in public.

This was a revolutionary departure for that culture.

In the parable, it is God who is the creditor and who forgives the debt. But in the real life situation, it was Jesus who forgave. Jesus is subtly making a claim to represent God. This is covert Christology.

4. Stand in front of you, take the force of the blow

Jesus has diverted the critics’ attention and anger away from the woman and onto himself, and he takes the pain. This is a small picture of the cross and the atonement.

Against social custom, Jesus speaks to the woman to give her peace. That is how God behaves. He takes the initiative to offer us shalom – life, forgiveness, wholeness.

This account is a summary of that in the book Jesus Through Middle Eastern Eyes, which I reviewed in a previous post.

I related another story from that revelatory book in Six things we might learn if we understood the mission of Jesus.

Stay tuned for an examination of Jesus’ revolutionary attitude to women (coming soon).

Graphic: Free Bible Images. (The graphic is actually for a different story, but fits here too.)

« Patriarchy, headship and equality
Did Jesus mean it to come to this? »