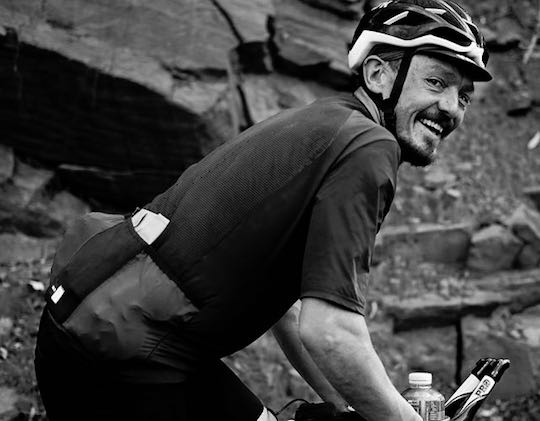 Death is ugly, especially when it is someone you love, or someone who died too young, or when it all seems so random and senseless.

I never met Mike Hall, and two weeks ago I didn’t even know his name or who he was.

But he died yesterday, and I am grieving, as are many others.

There is a sport which I had never heard of before – endurance cycle racing. Riders cycle long distances (thousands of kilometres) in one stage over a set route.

The Indian Pacific Wheel Race was an endurance cycle race held in Australia recently. 70 cyclists began in Fremantle two weeks ago early Saturday morning, to follow a 5,474 km route to finish at Sydney Opera House. They were unsupported, i.e. no support team, no back-up spare parts, just each individual on their own buying whatever they needed along the way, no outside help. They could stop when they needed to and sleep as little as possible, often on the side of the road. Every rider had a GPS tracking device so their position was known at all times.

It was epic – the leading riders were expected to average around 400 km per day for two weeks. It was quixotic – no major sponsors, no prize money, and the riders on their honour not to accept outside help. It was communal – champions and novices all respected by the watching cycling community. And it was an adventure, as the riders traversed a variety of landscapes – near desert, picturesque coast, major cities, alpine hills – across the width of Australia

The race attracted Australians young (18) and old (74), plus a bunch of overseas riders, including two well respected champions, Kristof Allegaert from Belgium and Mike Hall from the UK, who had each won several major endurance races but had never competed against each other.

I am not a cyclist, but I learned of the event, and found it was to go past our house near the end of the race. And so my interest was awoken. Our family enthusiastically followed the race via an online map which showed the route and the location of each rider.

It got us in, just as it did thousands of other race-watchers. Every few hours when we were home we’d check the position of the markers on the map, every morning we could watch short video highlights from the day before, check who had rested and who hadn’t, and look at the road and stopping places on Google Streetview. Engrossed cycling aficionados wrote Facebook and Twitter comments. The leading riders became personal to us as we watched them in short video interviews and knew them by their first names.

Kristof jumped away quickly to lead the field by several hours and Mike was second, pushing Kristof and never allowing him to rest for too long. By the time they had crossed the Nullabor, the riders were spread out over hundreds of kilometres. The fortunes of other riders varied. Some had to drop out with fatigue, sickness or injuries. One had to go to hospital, his riding companion made sure he was well cared for before continuing the race.

By Adelaide, it seemed clear this was a race only one of three people could win – Kristof, Mike and Aussie rider Sarah Hammond who pushed into third place by about halfway. These three legends passed through Melbourne about 100 km apart and into the steep hills of the Australian Alps and the Snowy Mountains.

The excitement reached fever pitch last Wednesday night and Thursday morning when Mike pushed on with almost no sleep, Kristof apparently overslept on the side of the road in the cold Alps, and Mike took the lead. But he desperately needed to sleep, and by Thursday night Kristof had overtaken him again.

So Friday morning at about 5 am I checked the leading riders’ positions, and knew that barring an accident, Kristof would win, probably riding past our house on Friday afternoon on his way to the finish. Mike and Sarah appeared to be resting, on the understanding that second and third place were theirs.

We made plans to be outside, to cheer Kristof on, and then again for Mike and Sarah as they came through hours, perhaps even a day later. If it was night, we were going to give them that respect and encouragement, then watch the finish on video.

And then came the tragic news. Riding south of Canberra on a busy country road in the early morning, a car collided with Mike and he died at the scene.

For a while no-one was sure what had happened, but later that morning the organisers called the race off. The cycling community that had been following the race from all over the world were distraught and hundreds of messages of grief, unbelief, condolence and support came in. Like a puppet with cut strings, everything deflated.

I never met Mike and only observed him as a champion cyclist for two weeks. Everyone said he was an inspiration, witty and personable. A man loved and respected, and that’s how he came across in the videos. And so I, and the other family members, felt a deep grief. This death shouldn’t have happened. This life ended too soon.

But we felt grief too for the organisers, the other competitors, the other fans watching like us. This was such a good event, not (as far as we could tell) tainted by bad sportsmanship, big dollars or illegal substances, but instead showcasing a community that shared a love of sport, competition and the outdoors. Showcasing almost superhuman strength, determination and endurance. And a respect, love and concern for each other that was palpable.

This event should not have been marred and in a sense destroyed by this ending. We should have been cheering them on as they rode past our house. We should have all gloried at the finish in the amazing fortitude of Kristof, the fighting spirit of Mike, the steely determination of Sarah, and the spirit of adventure of 70 competitors.

But they didn’t ride past our house and there was no big finish. Just an empty feeling.

By the time Kristof heard the news of Mike’s death, he was less than 12 hours from the end of the 14 day race. Apparently he turned his tracker off and kept riding …. and late on Friday evening with no crowd, no fanfare, but almost alone, he finished the race he travelled halfway across the world to compete in. 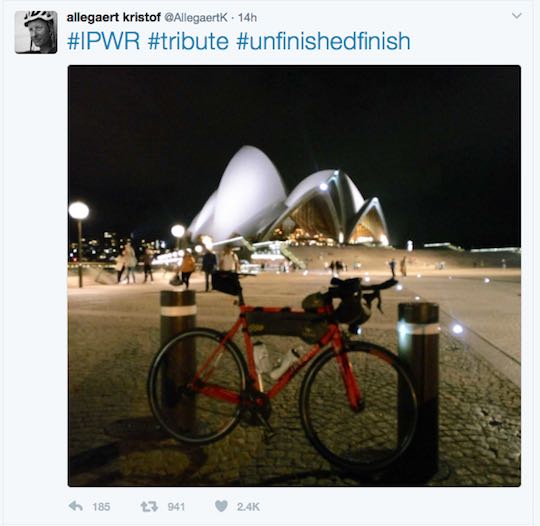 That said it all really. He finished the course quietly and paid tribute to his friend and competitor who had finished his life.

Tomorrow Kristof will lead a short memorial ride in Sydney to pay tribute to Mike and share the grief within the cycling community. There will be tribute rides in other cities too.

And I am still grieving, almost in tears as I write this. I will get over it in a few days, I suppose, but I will remember Mike, Kristof, Sarah and the rest for a long time.