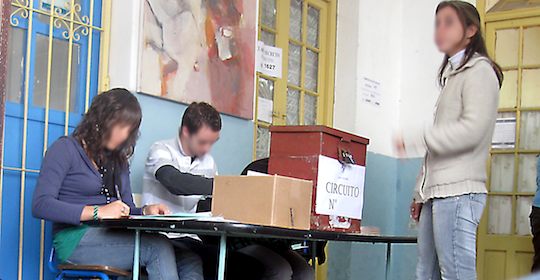 The combination of religion and politics can be explosive. It is very easy to hold our political views with religious zeal, and I am not always an exception. And so we often think that God is on our side of politics. (Or else we think God stands in the middle between the two polarised views.)

I thought it might be interesting to take a bunch of much argued over political issues and see what Jesus, as God’s representative on earth, said about them, if he said anything at all. A sort of HWJV – How Would Jesus Vote?

Right vs Left, Conservative vs Liberal

These terms are not the same, and you can find discussions of how the definitions depend on a view of wealth distribution (Capitalism vs Communism), or of the degree of individual rights vs Government powers. I’m not even going to try to unravel all the fine distinctions. Rather, I’m going to go with what most of us already know. Conservative/Right and Liberal/Left views are generally well known to us.

So I have scanned a number of websites that list political/moral/social issues on which the two sides have generally quite distinct and differing views, and made a list of 22 political/social issues. Then I have tried to find where Jesus said something that is meaningful on that issue. If I can’t, I am happy to accept what the rest of the New Testament says, or else make an informed guess, though I rate these conclusions as less certain. At the time I am writing this paragraph, I don’t know how it will turn out.

I’m not suggesting that everything Jesus said is directly relevant to today – culture changes and so ethical principles may be expressed in different ways today – but his sayings are surely an important start.

How Would Jesus Vote?

This table is in alphabetical order of issues.

This table suggests that Jesus’ views were across both sides of the political spectrum. Nevertheless, the table indicates he might have supported leftist views on more issues than right views.

CS Lewis wrote in Mere Christianity about what a truly christian society might look like: “We should feel that its economic life was very socialistic and, in that sense, “advanced,” but that its family life and its code of manners were rather old-fashioned-perhaps even ceremonious and aristocratic.”

This agrees with what I have arrived at in the table. Because Government is about public life, we might expect Jesus to vote more leftist, while on those issues that are more personal, he might be more right wing, but these are less often matters for government.

So of the three views, left, right and a bit of both, I’m on the left side of both, because I think that’s where Jesus would be. As I said before, I don’t necessarily think that Jesus’ teaching back in first century Israel should automatically be applied today – we should be following the principles rather than legalistic rules, and allow the Spirit to guide us – but I think the broad pattern of his teachings on the issues still applies.