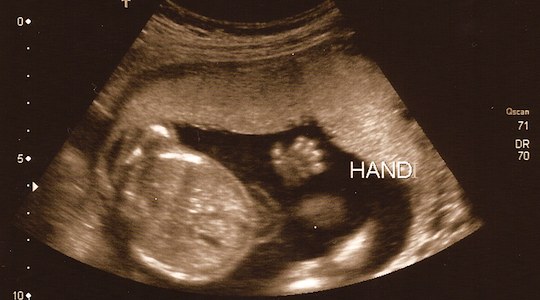 This leads on to a related question: when in the process of sexual reproduction does human life begin?

There is little consensus on the answer to this question – people take many different approaches:

For many, this is a simple matter of common sense. But unfortunately they don’t always agree on the answer. Is it conception, or when there is a heart beat or movement, or when the baby can survive outside the womb?

We will look further at these possibilities, but it seems we need something more objective than common sense to arrive at a convincing answer.

A fetus is a member of the species homo sapiens, and soon after birth it has human DNA which determines human growth and characteristics. However, while DNA defines us as a human being, it doesn’t define life – dead people still have DNA.

Comparisons between birth and death

One reasonable argument is to base our view on what doctors and law courts consider are vital signs whose absence indicates death. There is still some controversy even about this, but there seem to be four main views about the definition of death (with some matters in common):

It seems reasonable then to use one or several of these as criteria for the commencement of life.

However these result in very different determinations of the beginning of life. The fetus begins to function as an organism shortly after conception, the heart begins to beat after 2-3 weeks, the brain forms gradually, but can be considered to be working after about 8 weeks, but breathing doesn’t begin until birth.

The Westchester Institute for Ethics and the Human Person considers the early moments of conception, and the difference between a human cell and a human organism. It argues that there is a clear scientific approach to distinguishing different types of cells, based on “differences in either composition or behavior”, and that an organism is “(1) a complex structure of interdependent and subordinate elements whose relations and properties are largely determined by their function in the whole and (2) an individual constituted to carry on the activities of life by means of organs separate in function but mutually dependent: a living being.”.

On this basis, it is said that a moment very early on in conception, when a zygote is formed, satisfies these requirements, therefore a zygote is an organism, and this is when human life begins.

RationalWiki lists five scientific approaches to determining when life begins (some of which we have covered already):

RationalWiki concludes that this isn’t a question that can be resolved by science, and notes: “the potential for human life can begin very early, but it is personhood that is the sticking point”.

Geneticist and author Ricki Lewis identifies 17 possible points in the process of conception and birth that could be considered as the beginning of life. She opts for the time (about 22 weeks, she says) where a “fetus has a chance of becoming a premature baby if delivered”.

Lewis goes on to agree that this makes this choice technology dependent: “Until an artificial uterus becomes a reality, technology defines, for me, when a human life begins, rather than biology.”

People who believe that human beings are more than merely physical, especially religious people who believe we have a “soul”, will naturally consider the point at which a human develops or is joined with a soul to be the point where human life begins. But this doesn’t help as much as you might think, because people think this event occurs at different points.

Many suggest that we should be asking when the fetus becomes a person, not just a living organism. This may seem like the same question, but may point to the development of consciousness, which probably occurs sometime after 22 weeks.

There are those who say this is the wrong question. We cannot define life or when it begins, we should simply make choices affecting the fetus or baby based on what will causes least pain and not take away anything that will be felt as loss. This emphasises practical humanity, but could result in post-birth babies being treated in ways most people would regard as unethical.

There isn’t a clear objective answer

All these criteria make it impossible to say with certainty when human life begins, unless we hold to a dogmatic position based on a particular worldview. Our opinion on abortion (which I’ll examine in an upcoming post) will likely determine our view on when life begins, rather than the other way around.

Some views are weaker than others

Among the many views on when human life begins, some seem to have little basis in any objective criteria, for example:

It seems to me that the two points with the strongest arguments in support are conception (when a human organism with full DNA and potential is formed) and about 10 weeks (when brain and heart are functioning, thus paralleling the criteria for identifying when life ends).

A range of gradual growth?

I wouldn’t claim to have a clear answer, but I lean towards thinking that human life appears gradually – in which case a range may be a better way to define the emergence of human life. This range should surely begin at conception, and probably end at about 10 weeks when both heartbeat and brain function are present.

I think we should avoid being dogmatic, but I conclude that human life begins either at conception, or gradually in the first 10 weeks of pregnancy.

I don’t want anyone to think that this necessarily determines my view of the ethics of abortion (a topic I’ll address soon), but I do think it is relevant to the question.

« Who were the first human beings?
Christians and abortion »