Albert Einstein apparently once said: “The significant problems we face can’t be solved at the same level of thinking we were at when we created them.”

Churches in the western world are facing declining numbers and interest. Most of them are continuing to do the same things they’ve always done, hoping maybe to do a little better and so turn the corner.

One person who thinks this isn’t sensible, and isn’t going to work, is a minister of an interesting church near Sydney.

Churches in Australia are generally declining in attendance, or marking time.In the 50 year period from 1961 to 2011, church attendance fell from about 4.2 million to 3.3 million. More importantly, the percentage of Australians attending church at least monthly fell from 41% to 15%. (Sources are listed below.)

The largest church by far is the Catholic Church (46% of attenders), followed by Pentecostal (12%) and Anglican (11%). Migration from Catholic and non-christian countries partly explains the changes, but probably more significant are the increasing numbers of non-believers (approaching 20%) and of people who identify as christians but don’t attend church (about 45%).

The Anglican Church in Sydney

The Sydney Diocese of the Anglican Church is considered to be one of the more “successful”, with well-attended youth ministries and a mass of young candidates for ministry. It undertook an extended diocesan mission over the period 2002 to 2012, but is recognised as not achieving its goals, with church attendance barely keeping pace with population growth.

Despite this relative lack of success, the diocese recently decided to undertake further mission using similar strategies, but hopefully doing them better.

Martin Bragger is a parish minister in the diocese, in a relatively small church in Wollongong, an industrial city just south of Sydney. He has concluded that doing more of the same, even if a little better, won’t cut it.

Over the past decade he has led a transition in his church that is aimed at taking christians out of the ghetto of Sunday morning church and into the community.

Society as we haven’t known it

The culture and practices of many denominations, especially the Anglican and Catholic churches, come from medieval Christendom, when churches were village churches, communities were homogeneous, everyone was considered to be a christian, and the church’s role was maintenance of this christian way of life.

But the world has changed immensely since then, certainly in Sydney, where about a quarter have non-English-speaking backgrounds and about 1 in 6 households speak a language other than English at home. Communities are not homogenous, everyone is certainly not christian and we don’t live in stable villages but often in large commuter suburbs.

Martin suggests this reality requires a paradigm shift in church’s strategies, revolution, not reform. Sydney is home to a “mosaic of tribes”, and in this time of rapid change, we need to be doing cross-cultural mission to pagans, not following patterns from a long time ago and a galaxy far away, of maintaining a safe christian church.

Crossnet: church as we haven’t known it

Martin believes church in this new environment needs to be organic, fluid and flexible (more like a growing organism that reacts to its environment than a rigid structure), smaller (so it can adapt and change quickly) and mission-oriented. That’s not new for many of us, but how they are implementing this in a denominational church is very interesting.

The “unbounded church” includes those people who attend the regular Sunday service, but also a loose network of small “missional cells, groups and fellowships”, each one its own standalone miniature christian community that is considered as much “church” as the traditional Sunday meeting.

What I find most interesting is that the groups don’t meet in homes, but out in the community, wherever seems most natural. One meets in the local pub, another in a cafe near where mums drop their kids off at school, another as part of a playgroup.

In all cases, the groups do the usual “churchy” things – care for each other, pray, read the Bible and apply it to their lives – but they also are part of the host community at that location and interact with these people in culturally relevent ways. (In missional church language, they are centred sets, not bounded sets.)

Over the year or two that they have been meeting in this open, visible way, groups have gained the respect of those around them and become good friends and parts of those communities. When someone has a crisis, they often ask the christians to pray for them, and the christians are also able to provide practical help. 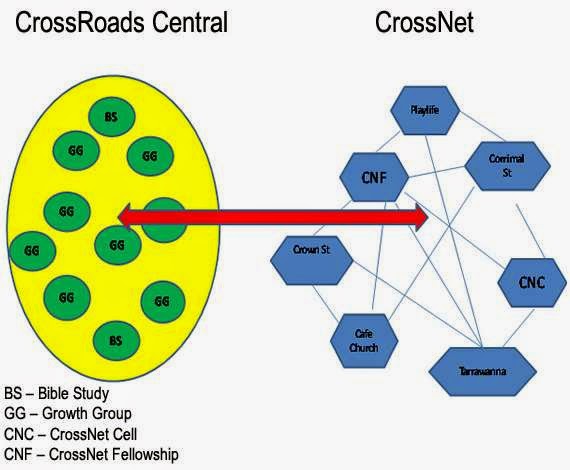 Martin sees this as just the beginning. He envisages the future where this network spreads all over Wollongong, is not specifically attached to any “big church” but exists in its own right. And amazingly, is still Anglican (though that isn’t strictly necessary).

There are many models of the future for the church. This is just one of them, but it has the advantage of being more than theory. It remains to be seen whether his denomination is willing to learn the lessons.

I feel that this experiment in church will ned to be accompanied by new thinking about salvation and God’s kingdom. Many people coming in from right outside church culture follow Jesus in ways that don’t always conform to our tidy expectations. If the unbounded church is open to it, christians may be enriched by these new perspectives.

Photo from the Unbounded Church blog.

« Are your donations to the poor doing good?
World War 1 – the war to end all wars? »