A hundred years ago, World War 1 was being fought across Europe. In a few weeks, Anzac Day, probably Australia’s holiest day, will be the 100th anniversary of the abortive, chaotic, mismanaged attempt by the Allies to occupy the Dardanelles.

It was later said to be the war that would end all wars. Sadly, that was far from true, but there are still some lessons christians can learn.

I’m not a historian, but I have read a little on the war, and it seems it was built on folly.

Reading the accounts of the reasons which led to the war – complex alliances and counter-alliances in Europe, the break up of the Ottoman Empire with many countries wanting a slice, a large build-up of armaments by the major powers and ethnic instability in the Balkans – leaves me with the impression that several of the major powers were just itching to fight. It is almost as if the politicians were looking for an excuse.

Industrialisation led to the development of machine guns, poison gas, tanks, long range artillery, aeroplanes, barbed wire, flame throwers. mechanised troop movement and hundreds of kilometres of trenches, so that the human beings were overwhelmed by the means to kill them.

But military tactics hadn’t always caught up with these realities, so out of touch aristocratic senior officers often sent waves of hapless infantrymen on suicidal waves of bayonet charges that were never going to succeed. And the next day they did it all over again. (Not all the senior officers were inept, but many were.)

However these tactics did change and develop during the war, but this probably didn’t change the deadly result for so many – perhaps the ordinary soldier was more likely to die from an artillery shell while sheltering in his trench rather than from a futile bayonet charge.

Only pawns in their game

It seems that the upper echelons of the government and military often paid little regard to the welfare of their troops. A millennium earlier, the feudal system had entrenched the power, wealth and privilege of the aristocracy, with the working man (and woman) expendable. Things didn’t seem very different in World War 1, although overseas troops like the Australians and New Zealanders had grown up in a more egalitarian society and didn’t always have the same respect for their “superiors”. 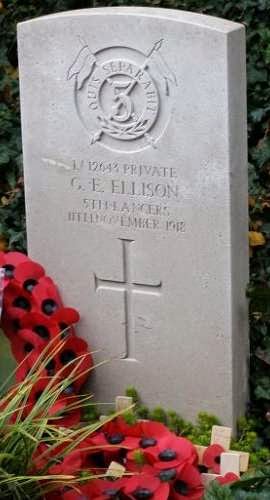 The folly of the war and the disregard for human life is well illustrated by the sad story of the last British soldier to die in the war. After the German surrender was negotiated, several hours were allowed to notify field commanders before the ceasefire began. Most soldiers on both sides sat quietly to await peace, but a few field commanders insisted their troop keep fighting right up until the ceasefire. And so Private George Ellison, aged 40, who had fought in the first battle of the war and survived more than 4 years of trench warfare, artillery bombardments, gas attacks, tanks, machine guns and snipers that had killed more than a million of his fellow Britishers, missed out on returning to his waiting wife and child when he was killed in a needless military action less than ninety minutes before the guns fell silent.

…. that ended an era

But the world changed after the Great War, so that European society was never the same again .

The war claimed a greater percentage of lives from the aristocracy – mostly younger officers who had to lead their troops into battle – than from the working class, so the upper classes were severely hit, and the successors of the landed gentry and professional classes often never made it home to take up those roles or carry on the family name.

In addition, the returning men, and the women who had been forced out of domestic service and into the workforce to contribute to the war effort, were less inclined to return to their traditional roles serving the upper classes. Women soon gained the vote, trade unions gained influence, and the world was different. Two decades after the war, home ownership had jumped from 10% (similar to feudal times) to 30%.

Soldiers who had faced the madness of the trenches and returned were not always going to accept their supposed lot in life, and returned much more independent.

The church and patriotism

The established church generally supported the war effort, and the war was portrayed in several countries and many churches as a “holy” war. But the horrors of the war led many people to question how the church supported the state, and many working men came home from the war disillusioned about God and religion. Many men never went back to church.

Some say the war was a significant step in the decline of influence of the church in Europe (although it apparently had the opposite effect in the US). Troops in the field and civilians at home were turned off by patriotic, hateful sermons (one army commander ordered his chaplains to give a “bloodthirsty” sermon on the next Sunday, and not to use texts from the New Testament), and many working people concluded that the Church of England was “an enemy of labor and in the pocket of the wealthy and nobles.” The university-educated clergy were often seen as distant and unsympathetic, “class restricted and socially exclusive”.

The Church of England in the First World War provides a comprehensive, but very sad, summary of much of this, and is well worth reading.

We shouldn’t be too harsh in our judgments. Those were jingoistic times, and it wouldn’t have been easy standing up against the patriotic fervour. But many ministers said they later regretted the vitriolic patriotism of their sermons during the war, so it is important to learn the lessons from history.

Patriotism does not equal christianity

Jesus said we should love our enemies and pray for those who mistreat us (Matthew 5:44-47), yet so many ministers back then taught exactly the opposite. How did this happen?

I can only theorise, but I think it is easy for God to become synonymous with what we think, and for churches to develop theologies that express what we think rather than what God has revealed through Jesus. Western Protestant theology (and I suspect most christian theology) can become a method of explaining away hard teachings rather than grappling with how we should live in the light of those hard teachings.

These factors make it easy for christians who love their country to make patriotism a christian virtue when it clearly is not. Jesus said that we weren’t worthy of being his disciple if we love parent, child or spouse more than him, and presumably he would say the same about love of country. Our first loyalty is to the kingdom of God.

Australian churches have (I think) mostly learned this lesson, and now distant themselves from government on many moral matters, and have often opposed Australian involvement in overseas combats. But from the outside, it looks to me that some US christians have ignored these lessons, and are in danger of being subverted by patriotism and placing country above God. Who knows if history will repeat, but I feel many churches will suffer losses in the coming generations because of this.

Jesus vs power and wealth

His brother, James, could be even more outspoken. Take this broadside from James 5:1-6:

Yet despite this strong teaching from Jesus and James, ever since Constantine subverted the christian church, the church has tended (mostly) to support the rich and powerful against the poor and powerless. For much of our history, the upper echelons of the church have been far too close to the seats of power. I, who wrote this, and most of you who read it, are rich by world standards. What would Jesus say to us?

World War 1 is surely an example when the the upper classes and government chose to wage war, and to do it in a way that showed little concern for the lives they were throwing away, and the church sided with them. The ordinary person was a victim. What would Jesus have said?

I am not a communist, or even a socialist, but it seems clear to me that the teachings of Jesus (and of James) are closer to socialism than they are to capitalism. How does Jesus want us to live?

Lets us be christians who are not impressed by power, privilege and wealth, who stand apart from them, and who care for the poor, for widows and orphans.

I cannot find where I obtained the top photo. Grave picture is by robk.