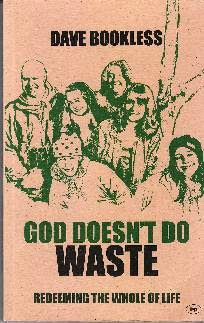 How important should it be for christians to care for God’s world? Are ‘spiritual’ things more important? Does caring for the earth get in the way of christian ministry?

This book offers some useful insights.

This book is the story of Dave Bookless’s life and work.

Dave spent a chunk of his early life in India as the child of missionary parents. He studied history at Cambridge, trained as a teacher and for several years taught religious education in public schools in industrial, multiracial Yorkshire in the UK. Anne, six years younger, grew up in the southwest of the UK.

After they married, they both studied theology, where Paul completed a Masters degree on “Church, Religion and Society” which included study of Sadhu Sundar Singh, a Sikh convert to christianity who was highly critical of ‘soft’ christianity in the west. Subsequently Paul entered the Church of England ministry at a church in London, feeling called to ministry in an urban multicultural location.

From before they were married, Anne suffered from debilitating illnesses, diagnosed as myalgic encephalomyelitis (ME), apparently brought on by a previous bout of glandular fever, and causing severe weakness, food intolerances, joint pain and depression. She was barely well enough to participate in a wedding ceremony, and subsequently suffered five miscarriages,the last of them at five months.

With her weaknesses requiring her to use a wheelchair, they attended a prayer meeting where Anne was prayed for, was given a mental picture of God healing people (her picture was actually of the lion Aslan in the Narnia books), felt a sense of God’s love flowing into her and was completely healed of the ME.

Almost immediately after her healing, Anne became pregnant and successfully delivered the first of their living children. Two more daughters followed, but the fourth pregnancy had complications when Anne haemorrhaged badly and both mother and baby’s lives were at risk. The doctors expected the baby to be lost, but scans later showed it had survived against the odds, and later their fourth daughter was born.

A pivotal moment in their life occurred while at Theological College, and they went on a holiday to the Scilly Isles. Dave was was disposing of household rubbish at a tip at the bottom of a cliff next to the sea. As Dave looked in horror at this ugly method of waste disposal, he heard an internal voice say: “How do you think I feel about what you’re doing to my world?”

Dave retained a sense of God’s interest in the state of the earth’s environment, and some years later he and Anne spent some time at A Rocha, a christian environmental organisation based in Portugal. A Rocha ran an environmental restoration, field studies and education centre staffed by a small christian community.

Gradually the idea came into focus of setting up A Rocha in England. At first they looked for a rural site such as that in Portugal, but subsequently Dave came to believe that an urban site would be more effective.

A degraded but undeveloped site was found near where they were ministering, and after a lot of prayer, lobbying, setbacks, fund-raising and God’s intervention, A Rocha UK was formed. Dave was the founding Director, with a small team of mostly volunteers assisting. Some time later, Council agreed to A Rocha managing the site and work began on the massive restoration.

The site was cleared and planted with grasses and trees, and a waterway running through it was improved and modified to create ponds. The local community was involved as much as possible. In 2003, Minet Country Park was opened.

Then began the process of utilising the Park as a way of showing God’s interest in redeeming waste land as well as people, and educating school students and the local community in environmental care. Activities included visiting schools, field visits by schools, after school environmental groups and summer programs.

Involvement with A Rocha led to the Bookless family facing many challenges to live a more sustainable lifestyle – using an electric car, limiting car use by using public transport or bikes, growing their own vegetables, reducing air travel as Dave travelled around doing environmental education and using sustainable building materials in their facilities.

Some may feel that environmental restoration and education isn’t an important role for a christian organisation, but Dave feels it is very important. It is a picture of the larger restoration of the whole creation that God is doing, and will complete, plus it allows non-christians to relate the christianity in an entirely new way. He says when he talks to secular groups, he often has people say: “If only there were Christians like you around here, I might start going to church.”

This book was very easy to read. Life stories are generally much more readable than more theoretical presentations of information. It gives lots of ideas about life, christian mission and caring for God’s world, though of course these cannot be fully developed in this type of book.

I think it’s main value is in showing the connection between christian living and creation care, giving a picture of how a family can try to live more sustainably and reminding us that God has only given us one earth and he expects us to treat it right and avoid waste.