One billion women around the world dancing and making a point. What’s not to like? And what’s the point?

According to One Billion Rising, one in three women worldwide will be raped or beaten in their lifetime. I don’t know accurate that statistic is, but any such statistic is intolerable. It is especially shameful for me as a man, because almost all the violence on women is perpetrated by men.

People trafficking is a major problem. Statistics are difficult to estimate, but it is likely that millions of women and girls are trafficked into forced labour each year, with perhaps a million being forced in to prostitution or otherwise sexually abused (see United Nations and Stop the Traffik).

One Billion Rising is a global movement to raise awareness and combat of the abuse of women. February 15th was a day of “Strike, Dance, Rise”, and you can find videos of dancing in support of OBR all over the internet. Here are a few: 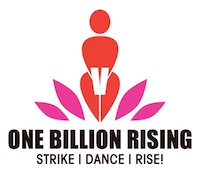 Where do christians fit in?

Jesus said (Luke 4:18-21) that he came to bring freedom for the oppressed. And christians have often responded to that call. In the first few centuries after Jesus, the christians were known in the Roman Empire for their care of women, unwanted children and the sick. Christians have opposed slavery, apartheid, war and inhumanity. The work has continued to this day in the programs of medical help and economic justice in third world countries.

But there is an unfortunate darker side to Christendom, when ‘christians’ have ignored the teachings of Jesus and participated in crusades, oppression of women, gay hate crimes, slavery, racism and war.

We should be leading the way on ending, as much as possible, abuse and oppression of women. And joining in, if we can dance, with those who are working for freedom for women.

Christians are commonly seen as playing a part in the oppression of women by holding to a strict literal interpretation of a few Biblical passages that limit the role of women and can entrench male domination. I, and many others believe the Holy Spirit is leading his people into new freedoms for women, but I recognise that many christians are not of the same view.

But above all else, we must be people of grace. If some of us feel compelled to continue a more patriarchal approach, they need to find a way to do it with extreme grace. And if they can’t do it with extreme grace, then something has to give, and it cannot be grace! Those who, like me, believe in the new freedoms in the Spirit for women, must somehow try to make up for those who do not.

So I say, more power to One Billion Rising!

« Interpreting the Bible: the story so far
Word of God? »