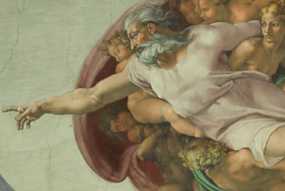 It doesn’t take long before a thoughtful Bible reader comes across some rather odd and nasty things, especially in the Old Testament. And non-believers use the odd and nasty things as a weapon against christians: “How can you believe in a God who is genocidal?” they might say.

What are we to make of these things? Do they make it hard to maintain faith in Jesus? And how should we answer the critics?

There are many places in the Old Testament where God is described as doing or ordering things which we would today say were morally repugnant. Because I think ordering humans to do his “dirty work” is the most difficult to explain, I will give several examples of this:

These stories, effectively ethic cleansing or genocide (and there are more like them), are jarring, to say the least, and it is hard to see why they don’t cause more problems than they do for christians. We may be able to accept that God has the right to give and take away life, but it is difficult to see how God can include “Do not murder” in the Ten Commandments and then order these killings. How are we to explain these commands?

If we are christians, our supreme revelation of God is in Jesus. When we see him we see God. He remains the foundation of our faith and he has not changed. These difficult Old Testament passages are no reason to give up trusting in Jesus. But he taught non-violence (e.g. Matthew 5:21-22, 38-48), so we have a dilemma – why does God seem so different in the Old Testament compared to the New?

Until recently, probably the most common christian explanation was to simply argue that God is good, and so these killings must have been necessary, and we shouldn’t question God. The Bible is God’s inerrant word, so the stories must be literal history, and we shouldn’t doubt them.

Sometimes christians try to justify God’s commands. For example, some of the accusations by non-believers are based on misunderstandings. And we can better understand God’s actions when we understand the evil of the Canaanites and the corrupting effect of this evil on God’s people. But in the long run, we can’t know all the facts, so don’t question God, OK?

But this response is now under strong attack. Christians holding this view are being accused of believing in a genocidal God who, far from being loving, does not behave in a way that almost everyone today would find repugnant. (For example, Richard Dawkins used this argument to justify not debating christian philosopher William Lane Craig, who holds a view similar to this.)

In recent times, some further explanations have been offered. It is said that the alleged genocide of Joshua 10 never happened, that later chapters show many of the “exterminated” tribes still alive, thus showing that the author never intended us to understand the command literally. Perhaps the language is just macho exaggeration. But this somehow misses the point, and doesn’t make God’s alleged actions any more palatable, nor preserve the inerrant view of the Bible.

Perhaps the most interesting test is this, and it is one commonly posed by non-believers. If you believed God told you to sacrifice your child, or wipe out a tribe, would you do it? If you would (and some christians give this answer), then you show yourself to be a scary and dangerous person who is disregarding Jesus’ teachings about non-violence. And if you wouldn’t, then you are saying that God’s apparent commands are not morally acceptable to you.

Perhaps God adapted his commands to the times?

Some seek to explain God’s commands as part of a program of gradual change. Every tribe or nation had their own gods, so God began what the Hebrews could understand in those violent times, and slowly brought his people into a new and correct understanding. But while progressive revelation is a part of christian belief, this seems an unacceptable explanation, for it still means God commanded some terrible things.

Perhaps the Old Testament records what people thought rather than what God actually said?

Faced with the above difficulties, some christians conclude that it is impossible that God could have given such horrendous commands. The accounts must reflect what the Israelites thought, and the Old Testament shows them gradually learning that God’s ways are different to the middle eastern culture of the time. The Bible is a true record of what they thought, not what God said.

Some argue that there are more than one strand in the Old Testament, a monotheistic strand and a polytheistic one, and these two compete until monotheism is seen as being true. Perhaps this is God’s way of making the choices clearer for us – we can see the results of wrong understandings of God, and we now have a choice whether to perpetrate them, or follow the new revelation in Jesus. Perhaps God’s revelation was through a fallible human document, not an inerrant divine one?

This view has the virtue of preserving God’s character, but means the Bible is reduced to a more human book. That is no problem for many christians, but would disturb others whose faith depends on the Bible bring infallibly “right”. And it would certainly mean we would have to be more circumspect about using Old Testament texts as guides to God’s commands.

“I am a christian, and my belief is in Jesus. We are in a new covenant now (see The Old Testament law and christians). I am appalled at the killings in the Old Testament and cannot explain them, but my inability to explain them doesn’t alter my faith in Jesus and in his teachings.”

This approach has the virtue of being honest and preserving God’s character, but wouldn’t appeal to those who want answers to everything.

So, can we know which is the truth?

Each of us has to make up our own minds. I have been considering and praying about this difficult question on and off for more than a year, and I am still unsure. But my tentative conclusions (for what they’re worth) are:

This issue won’t go away

I don’t believe this issue will go away. It troubles too many believers, is perhaps the main rod that unbelievers use to beat christians, and plays a significant part in the loss of faith of many christians. Many books are being written about it.

In Habbakuk 1:5-6, God says he is doing an unexpected and shocking thing – using the fierce Babylonians to punish and correct his people. Whatever we may think about that, I can’t help feeling God is using the attacks of the atheists on this matter to force us to reconsider our traditional approach to this troubling question. Let us not miss the opportunity, but let us pray and consider.

For further reading you may wish to try Is God a Moral Monster?: Making Sense of the Old Testament God by Paul Copan. I haven’t read it, but reviews indicate it may be the best defence of the traditional christian view. For a critique of this view and this book, see Randall Rauser Is God a Moral Monster Parts 1 – 4.