The back half of the Old Testament comprises the writings of 16 prophets. While most of their writings were either condemnations of the religious and social practices of the people of Israel and Judah, or encouragement to them in times of distress, there are a number of predictions about future events in the surrounding nations.

Some christians have used these prophecies, and their fulfillments, as an argument that the Bible is divinely inspired. However this argument has gone out of fashion. Criticisms of the argument include:

Typical arguments against fulfilled prophecy can be found on the Secular Web here and here.

On this page I examine some of these claims and counter claims, to see how they stack up against the historical evidence. if the prophecies were indeed fulfilled, then an argument for the truth of the bible may be fairly developed, but if the claims cannot be sustained, then it is dishonest for christians to use them

I have only examined two prophecies so far and I think the jury is still out. The two prophecies are broadly correct, but not accurate in the details. This may indicate some special insight by the prophets, but some claims of fulfilment are over-stated.

This is one of the most commonly discussed examples. For example John Bloom, a university professor of physics, has written Is Fulfilled Prophecy of Value for Scholarly Apologetics?, in which he argues that fulfilled prophecy can be used to support the supernatural origin of the Bible and illustrates this with a discussion this prophecy, which he believes has been remarkably fulfilled. Yet sceptics use this same example to argue that Ezekiel’s prophecies were mistaken.

Tyre is an ancient Phoenician seaport on the Mediterranean coast just north of Israel, probably established in the third millennium BCE. It was located on an off-shore island and on the adjacent mainland. It was attacked many times in Biblical times, and captured more than once. In 586-573 BCE Babylonian king Nebuchadrezzar attacked Tyre and razed the mainland section to the ground but was unable to capture the island city despite a 13 year siege, because his land-based army had no ships. 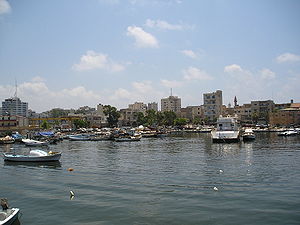 In 332 BCE Alexander the Great captured Tyre, and as part of the assault built a causeway to the island using rubble from the remains of the old mainland city. (With the build-up of marine sediment, the former island is now an isthmus.) In 1291 CE, Muslims conquered the city and left it in ruins. It remained a small fishing village for centuries, then began to be re-established in the 18th century. It is now Lebanon’s fourth largest city at 60,000 people.

The prophet Ezekiel prophesied against Tyre:

Interpretations of this prophecy are very polarised, as these references show:

There is no doubt that some matters predicted by Ezekiel came to pass – the attacks on Tyre, the razing of the mainland city, the scraping of its rubble into the sea, and the overall downfall of the once-powerful city. But other matters are arguable, and Ezekiel himself, in his second oracle, seems to accept that the first had not been fulfilled completely. The main factual disagreements between the two interpretations seem to be:

It seems that neither side can win this argument – there are some fulfilled prophecies in Ezekiel’s oracles, and some unfulfilled. But there is a middle view, represented by this balanced discussion by christian scholar Robert Bratcher. He concludes that some of Ezekiel’s prophecies were wrong but that:

We can conclude that while Ezekiel correctly predicted the downfall of the powerful city of Tyre and some of the details of its fate, many of the details are at best unclear, and at worst unfulfilled. Thus his prophecy is problematic for the purpose of making an argument for divine authorship.

Both Isaiah (13:17-19) and Jeremiah (51:11-12) predict that God will cause the overthrow of Babylon, and suggest that this will happen via the Medes. (To be strictly fair, they don’t say explicitly that the Medes will conquer Babylon. Isaiah says the Medes will attack Babylon, but only infers they will destroy it; Jeremiah’s prophecy only says the Medes will be “stirred up”, and again their role in Babylon’s destruction is only inferred. But most commentators think the connection is clearly inferred.)

The historical sequence of events concerning Babylon is complex:

Clearly Babylon fell from power and was destroyed as an empire and a functioning city, but it was not destroyed in battle (except by the Assyrians, and then re-built), it is problematic whether the Medes can be considered responsible for this.

So the prophecies are not strictly accurate. They were broadly fulfilled, but not in detail.