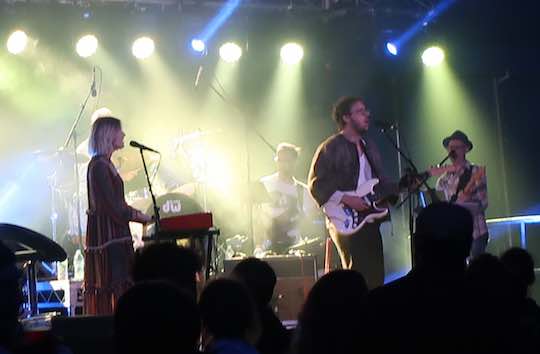 Do you know someone who appeared to be a strong christian, and then began to doubt the truth of the whole thing?

I’m guessing they were likely someone in their twenties, brought up as believers but suddenly facing questions they didn’t have answers for and issues they couldn’t easily resolve. And I’m guessing many of them ended up either giving up their faith or radically changing what they believed.

It seems to be a frequent occurrence these days. Maybe we can learn something from these musicians who have gone public on their doubts and how their beliefs have changed.

Michael and Lisa were US christian music royalty just a decade ago. Married young and playing worship music together at their church, writing their own songs, they recorded and played as part of the christian music scene in the US. Eventually, with various band members, they recorded half a dozen albums and toured the world playing to large audiences.

But things were changing for them. Both of them had unanswered questions about their faith from when they were younger – Lisa says “but you weren’t really allowed to ask them”. Catalysed by several events, including trying unsuccessfully (for some time) to become pregnant, observing the christian music scene around the world, visiting Auschwitz, the birth of their second daughter with Downs Syndrome and serious heart defects requiring surgery, and thinking about what they believed, their beliefs began to shift.

They were criticised by many, and lost a lot of support in the christian scene, for expressing doubts about the historicity of the early parts of Genesis. But that was only the beginning. Lisa said she didn’t know if she could read the Old Testament any more, they began to doubt that the God of conventional christianity could exist, and eventually Michael decided he didn’t believe in God at all (for a while at least).

They say they now have a very different perspective, one that Michael expresses on the “progressive christian” Liturgist Podcast, a perspective that welcomes diversity in belief and worldview and is far less dogmatic than the christianity they both grew up in. It is hard to pin down exactly what they now believe, but it is somewhere between conventional christianity and atheism, and apparently more centred on spirituality and inclusion than dogmatic religion.

It seems, from the distance where I am, that evangelical christianity rejected the Gungors as soon as they rejected a part of evangelical belief. I’m not sure if any evangelical christian walked with them as they travelled on their deconstructive journey, but it seems most christians reacted in a way that was more tribal than christian – more or less “if you’re not part of our tribe we don’t want anything to do with you!”

It is significant to me that both Michael and Lisa felt they weren’t allowed to ask their “big questions” when they were growing up in the church. Who knows if things may have been easier for them if they had been encouraged to question, and offered resources for answering these questions?

Most members of Aussie band Gang of Youths were once part of the Hillsong congregation in Sydney. Leader and song-writer David Le’aupepe absorbed the Judeo-Christian spirituality of his Samoan father and Jewish mother, and more or less accepted it all without thinking until he became an adult.

Coming from a poor family, getting in trouble in his youth for drugs and the rest, an early marriage that failed and a suicide attempt (which also failed, obviously), were all part of his early life. But unlike others on a similar trajectory, David avoided gaol, death or hopelessness, began writing music, developed an interest in existential philosophy, formed the now successful band and recently remarried.

Although the band members met at Hillsong church, and although many of the songs have spiritual and philosophical themes, they have never seen themselves as a christian band. It isn’t clear to me what Le’aupepe believes now, not surprising since he says his beliefs “change day to say”. I have seen him identify as a theist and say “I still align myself with Jesus”, but his interest seems more drawn towards existentialism, especially the christian existentialism of Søren Kierkegaard. And he makes clear he isn’t following someone else’s version of christian morality.

In the end, he finds faith in love and in friends, and offers advice on living such as “Go farther in hope, go farther in lightness”, and “Do not let this one end, Before you emerge as the winner” and “Say yes to grace! Say no to spite!”

Who knows where David Le’aupepe will end up with his faith, whether he will embrace the more defined christianity of his upbringing or end up a secular humanist, or something else? But I can’t help wondering whether there was any way he could have been given in his youth more encouragement to explore his philosophical leanings and aspirations from within his faith.

Guy Sebastian rose to prominence in Australia when he won the first Australian Idol in 2003. With his distinctive afro hairstyle and his smiling baby face and nature, he was a great hit. Surprisingly in secular Australia, it only seemed to add to his popularity that he was an unashamed christian who sang in a Pentecostal Church in Adelaide.

Idol contestants don’t always find it easy making their way in the music business, but Guy found his way in the adult R&B area, and in the past 15 years has sold more than a million albums and 2.5 million singles, with chart success in the US as well as Australia. He is now married with two children.

But it wasn’t too long before Sebastian found the confines of Pentecostal christianity too restricting and “manipulative”, and his faith evolved. He says one catalyst was a gay christian friend feeling fearful about the church’s response to him coming out. But more generally, it seems that a personal conviction that his previous christian beliefs, or the ones people thought he had, were too narrow “which is the complete opposite of who I am. People were putting me in this weird system of beliefs and judgments I didn’t belong in.”

He now doesn’t believe what he was taught back then, but has researched and worked out his own views, based more on the belief that God is love and that christianity is not the one and only way. So he says no-one “has the right to say what they believe is more important or more significant” than anyone else.

Yet he still was willing to speak at a Hillsong church conference in 2017 and says he prays before each concert. He is an assiduous worker for several charities, including World Vision.

It is interesting to me that there are many christians who share Guy’s views about acceptance of gays within christianity and the importance of being less dogmatic, more humble about our own beliefs and more tolerant of other views and other religions. Had he been able to experience that type of christianity back then, who knows if he would have retained a little more of his faith in Jesus as the son of God? Perhaps he has, but just doesn’t speak it out so forthrightly – who knows?

This now-disbanded Australian group is not as well known as the others I’ve written about here, but they have been one of my favurites since I saw them play at the Black Stump Festival in 2007, when they were still in their formative stage in terms of their line-up and their musical style.

The band apparently formed when a bunch of musicians living in remote Townsville in North Queensland, each with their own songs, styles and bands, got together one summer to enjoy themselves creating interesting and diverse music together. It’s not clear to me how strongly they identified as christians back then, but at least one member attended a christian high school, their first two CDs thanked God and Northern Beaches (I presume a church), some of their lyrics touched on christian themes and they twice attended the Black Stump christian festival.

As they became more popular, the many references to Jesus in their lyrics were noticed and questions asked in interviews, but the band members weren’t very forthcoming. They simply said that some of them came from a christian heritage and they had some belief without specifying it.

The lyrics of their songs were often somewhat dark and negative, but with christian overtones at times: the father who finds the peace of the Lord after a divorce in Blood, the allusions to the parable of the prodigal son in Pig Food, the song The Fall of Man and the “evidence of heaven” in Gold. In Jesus came to my birthday party the singer says that was a long time ago and she hasn’t seen him in a while, and in Deep Water the singer muses that “When Jesus comes he’s gonna eat with me” but “he’s gonna find our children old”, suggesting he’s losing confidence.

I don’t know what to conclude about their faith, and it’s not really my business, but I suspect some were never believers and others have found the going tougher living out their former faith as adults. There’s a theme here.

Is there any take-home message?

I think there is. And I’ll explore this in my next post (this one is already long enough!).

But I hope you at least check out some of the music.