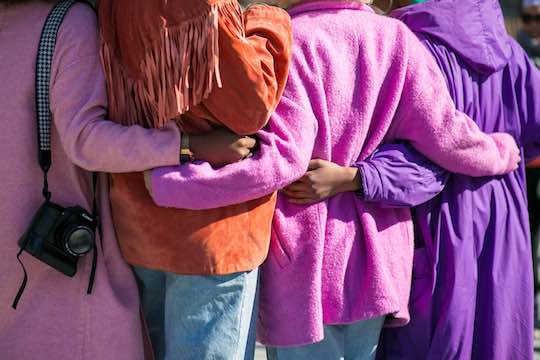 I was raised in a family of four noisy boys. As we grew up, we became quite opinionated, and often argued, quite amicably but noisily, about religious, political, ethical and a thousand more trivial issues that interested us.

When each of us found girlfriends and eventually wives, they didn’t always find our loud and rambunctious conversations easy.

And it didn’t always stop there. As an idealistic and articulate youth, I found it easy to argue with just about anyone. Fortunately, my wife had good advice for me.

Wisdom to live by

Many years into our marriage, she told me a simple principle I have never forgotten (though not always followed, unfortunately!):

“Just because you know something doesn’t mean you have to say it!”

So simple. I don’t always need to express an opinion, even when I disagree with someone. Each situation is a choice.

I think it is something many of us still need to learn.

Almost 50 years ago, I remember a conservative evangelical minister and university chaplain explaining to me that the words used in the Bible described homosexual acts, not orientation, and so orientation should not be seen as sinful. Sometime later, scientific evidence began to indicate that many, possibly most, LGBTQI people were born that way and had little or no choice in their orientation.

So christians began to be more accepting of gays. Most still viewed gay sexual relations as sinful, but a small but slowly increasing number of christians now view gay marriage as acceptable to God.

During this same time period, societal attitudes to homosexuality have changed, much faster than in the church. In most advanced western democracies at least, it appears the majority now accept gay marriage, and are critical of those who oppose it, often regarding them as homophobes. “Love is love!” they say.

Cartoonist Gary Larsen drew a number of cartoons with the title “Trouble brewing”, where two mutually hostile ideas or activities were placed in juxtaposition. For example, one had a sky diving school located next to an alligator farm.

The christian and societal attitudes to homosexuality, in Australia at any rate, seem to be a classic case of trouble brewing. There were several warning bells for christians.

A recent Royal Commission found many examples of child sexual abuse in institutions – churches, schools, sporting associations, childcare institutions, etc. There were many cases of the abuses being deliberately covered up by the institutions, including churches.

Over 60% of these cases occurred in institutions run by the Catholic Church, and surveys have shown that this is a major cause of mistrust in the church. There were many cases of both heterosexual and homosexual abuse by priests.

So when christians spoke against homosexuality, their words were sometimes seen as hypocritical because of the church’s sorry record on abuse.

There has been agitation for years to “legalise gay marriage” in Australia, which really meant changing the legal definition of marriage to include LGBTQI marriages. The conservative political party in Australia (ironically named the “Liberal Party”) was divided on the issue, so eventually the government invited all Australians to participate in a postal survey late last year, to establish the majority view.

It seemed that the main opposition to same sex marriage came from christians (though to be fair, Muslims and some ethnic communities were also strongly opposed). The Sydney Diocese of the Anglican Church, one of the largest evangelical church groupings in Australia, donated a million dollars to support the “no” campaign, drawing criticism, even from some of its own clergy, for spending money that should have been used to assist the poor.

Many christians, while opposed to gay marriage on moral grounds, believed that this was a matter where everyone should be free to follow their own beliefs, and christians shouldn’t tell non-believers how they should behave. So many christians either voted “yes” or didn’t vote at all.

In any event, the “yes” vote triumphed 62% to 38% and the government began to draft same-sex marriage legislation. Conservative christians looked to be out of touch with Australian society, and were portrayed by some as homophobic and seeking to impose their will on the rest of Australians.

Fallout from the changes to the definition of marriage

One of the results of the yes vote was a push by conservative christians to get stronger protections for freedom of speech, conscience and religion, to allow them to continue to oppose homosexuality even against “political correctness”.

Freedom of speech is not clear in Australia. There isn’t a definitive statement, as might appear in a Bill of Rights (Australia doesn’t have one), and while it is difficult for Governments to legally stifle free speech, it seems that laws against racial vilification and “hate speech” and fear of defamation may act to reduce freedom to express ones beliefs.

Proponents argued that the legislation didn’t affect present freedoms, but opponents weren’t so sure.

A recent Synod of the conservative Anglican Church in Sydney addressed these issues, and we have seen three outcomes:

Whatever you may feel about the morality of homosexuality and gay marriage, all this has been a public relations disaster for the church in general, and the Sydney Anglicans in particular. Donating in support of the no vote was bad enough, but the recent moves have left many people with a bad taste in their mouth.

I can’t help feeling that the Anglican Church should have more carefully considered the likely outcomes of its various actions, decided which were its most important goals and which points were likely to be counter-productive to what they see as their overall mission, and expressed their views in ways that were likely to cause least offence.

I would judge that the recent actions by the diocese have dug a hole that will be difficult to climb out of. They appear to have brought to public attention issues that may otherwise not have been so prominent, leading to deeper fears and increased vocal opposition in the community and in the press.

Getting used to disappointment

The christian church has had a dominant and privileged position in Australian society for two centuries, even though Australians tend not to be highly religious, and less than 10% of Australians are regular churchgoers. That dominant position has sometimes led to discrimination against minorities such as the LGBTQI community.

It probably won’t do us any harm to be on the other end of public opinion and even legislation. We might learn some humility and better identify with other minorities.

That doesn’t mean I think that christians and churches shouldn’t speak out on issues – in a democracy, we have that right and should continue to use it.

But we surely need to do it in a more humble way. We need to recognise that the way things are said and done makes a big difference to the way the church, and ultimately christianity and Jesus, are viewed.

If the church regards making converts as its highest goal, as the Sydney Anglicans do, acting as the moral police is probably not going to be helpful. And if they believed, as I do, that making converts and serving the community, especially the disadvantaged, are both important, then I think it is still counter productive to be moral police.

If we want gays, and others, to know that God loves them, we need to welcome them and accept them as they are, not begin any relationship from a condemnatory position.

And surely, if christians regard homosexual activity as sin, they need to be as actively opposed to other sins, such as materialism, which Jesus and the apostles spoke out against much more than they spoke against homosexuality (Jesus doesn’t actually say anything about it in our gospels).

I wonder when clergy will refuse to conduct a wedding of someone who is obscenely rich, greedy and materialistic? Would an Anglican school dismiss a materialistic (or proud or jealous) teacher?

Some christians worry that if we don’t speak out on ethical issues, it will seem that we support viewpoints and behaviours that we don’t actually agree with. But christians don’t have to be moral guardians. It is better to speak when we have a position of respect rather then from a position where we are scorned.

In fact, it may be better if we ceased to be moral guardians, and began to show more unconditional love and acceptance of people even if we don’t agree with their behaviour. There may come a time when we need to speak, but it maybe shouldn’t be the first thing people hear. Or the second.

We have a lot of ground to make up if we want people to believe that God’s love is greater than his condemnation.

Just because we know (or think) something doesn’t mean we have to say it!

Photo by Vonecia Carswell on Unsplash

« The Underground, Florida – a better way to be the church?
Letting go and hanging on ….. and flying! »