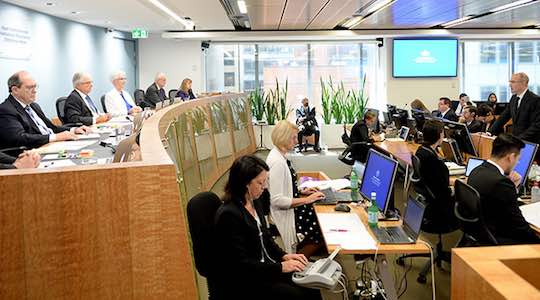 Child sexual abuse is a terrible crime and rightly loathed by most people. And churches have, tragically, been home to some of the worst offenders.

The Australian Government set up a Royal Commission into Institutional Responses to Child Sexual Abuse almost 5 years ago. (A Royal Commission is a judicial process that has wide powers, and less restrictions than a court of law.) After more than 70,000 calls, emails, letters and interviews, the Commission has delivered its final report and recommendations.

The revelations coming out of the Commission are heart-breaking and its findings raise many issues. This post is just a few thoughts in response. (All quotes below are taken from the Executive Summary of the Commission’s report.)

The crimes are bad enough …..

The Commission was not tasked with investigating cases of abuse in order to prosecute alleged perpetrators, but to investigate how institutions and government responded to reports of abuse. Nevertheless, two and a half thousand cases have been referred to authorities for further investigation and action.

“Tens of thousands of children have been sexually abused in many Australian institutions. We will never know the true number. Whatever the number, it is a national tragedy, perpetrated over generations within many of our most trusted institutions.”

The Commission is finding that many different types of organisations – “government agencies, private companies, churches, faith-based and community organisations delivering out-of-home care, childcare, education, sporting, recreational and cultural activities for children” – have contact with children, and have the potential for child abuse.

“The sexual abuse of children has occurred in almost every type of institution where children reside or attend for educational, recreational, sporting, religious or cultural activities. Some institutions have had multiple abusers who sexually abused multiple children. It is not a case of a few ‘rotten apples’.”

Teachers, priests, youth leaders, sporting coaches, staff of institutions such as orphanages, etc, are in positions of trust and power. Tragically some of them misuse those positions and prey upon children, leading often to broken lives, mental illness and suicide.

“The sexual abuse of a child is a terrible crime. It is the greatest of personal violations. It is perpetrated against the most vulnerable in our community. It is a fundamental breach of the trust that children are entitled to place in adults. It is one of the most traumatic and potentially damaging experiences and can have lifelong adverse consequences.”

The Commission concluded that:

“It is now apparent that across many decades, many of society’s institutions failed our children. Our child protection and criminal and civil justice systems let them down.”

The Commission found that there was a reluctance to report abuse, children were often not believed, police and government agencies often didn’t act on the reports, and organisations tended to cover up the abuse rather than address it, often leaving the children concerned vulnerable.

It seemed that the professed aim of the organisation, the care of children, was neglected in favour of preserving reputations.

“It is remarkable that in so many cases the perpetrator of abuse was a member of an organisation that professed to care for children. Just as remarkable was the failure of the leaders of that institution to respond with compassion to the survivor.
Many institutions we examined did not have a culture where the best interests of children were the priority. Some leaders did not take responsibility for their institution’s failure to protect children. Some leaders felt their primary responsibility was to protect the institution’s reputation, and the accused person.”

The failure of some churches

It is a terrible fact that the most commonly reported cases of abuse were by people in religious ministry and by teachers. (However the Commission also recognised that the number of children abused in family or non-institutional settings far exceeded those covered by this investigation.)

Of those abused in religious institutions, 62% were abused in institutions run by the Catholic Church. (To be fair, it would probably have the largest share of religious schools and social services.) The next largest was 14% in the Anglican Church (more or less equivalent to the Episcopal Church in the US).

Many stories have been told of priests accused of child abuse being protected, allowed to remain in their position or sometimes moved to another parish, which had the result of allowing vulnerable children to be abused, sometimes for decades. Even after the Commission began reporting its findings, the Catholic Church often seemed to many people to be more interested in protecting its “good name” and avoiding paying compensation. (The Commission’s findings on these and other matters can be read in its Executive Summary.)

We don’t have to guess on this – we have many examples in the gospels of Jesus showing his care for children (Luke 18:15-17) and those neglected discriminated against by society (Luke 7:36-50; 13:10-16). And he sharply criticised the religious leaders who made things too difficult for the people they were supposed to be helping (Matthew 23:1-4).

But we don’t really need these Bible references. No-one doubts that child sexual abuse is wrong, and few doubt that for christians, protecting the child is more important than protecting the organisation.

So how did the health and safety of so many children come to be so badly neglected by churches and people who are supposed to be followers of Jesus?

A lesson for us all

I suppose there were some abusers and their protectors who were not followers of Jesus, but entered the church or worked in religious institutions for other reasons which may have included the opportunities for sexual abuse it provided for them. But I also imagine most abusers and protectors were genuine believers.

The Commission report identified a number of factors that may have contributed to apparently well-meaning people committing sexual abuse or not dealing with offenders. Some of these were:

I think these conclusions point to organisations and individuals (not just the predators but also those who protected them) who lost sight of their christian ideals. The purpose of serving and caring for children became secondary to individual or organisational success.

This is a warning to us all that goes far beyond the horrors of sexual abuse.

I suppose there will always be sexual predators in this life. But we can realistically hope and pray that never again will christian organisations place personal or organisational reputation ahead of the health and wellbeing of people, especially children, in the way reported by the Commission.

« Book review: Disarming Scripture
Looking ahead: 12 lessons for churches in 2018 »