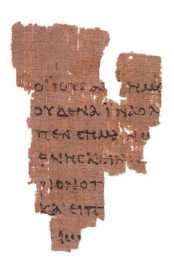 Another common argument used against christian belief is that the New Testament has been significantly changed since it was first written, so we cannot have any confidence in we are reading. Who knows if it is an accurate reflection of what the original authors wrote?

Eminent scholar Bart Ehrman’s 2005 book Misquoting Jesus outlines his view of “how radically the text has been altered over the years”.

Is the situation really as ‘bad’ as that? What are the facts? I have spent some time checking the matter out.

The New Testament was written long before the age of printing, so every copy of a document had to be made by hand. And eventually the original and later copies wore out or were lost. As a result, the New Testament we read is reconstructed from more than 5,600 Greek manuscript copies of all or various parts of the New Testament, plus about 20,000 manuscripts in other languages.

When these 25,000 manuscripts are compared, numerous variations are found – perhaps as many as 400,000 – about three variations for every word in the whole New Testament!

So there is a problem. Which of the variations are the original ones?

It turns out that the situation isn’t as ‘bad’ as it first appears.

We can actually be fairly confident we have a text very close to the original. There is far less to worry about than I thought when I began to investigate this matter.

However even this amount of doubt may be a difficulty for someone who believes the Bible must be without any errors so God’s exact words are available to us.

Photo: The earliest New Testament manuscript so far discovered, a fragment of John’s gospel dated about 30 years after the original – from Wikipedia.

« Arguments against Jesus
Learn some cosmology »