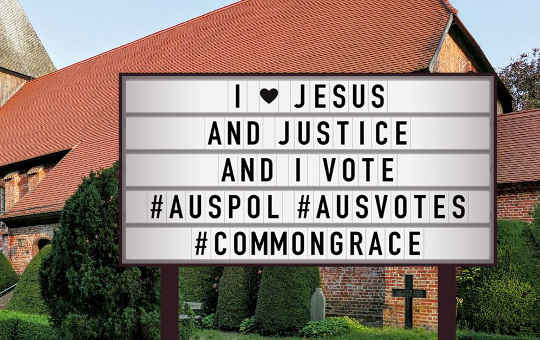 Just over a week ago was election day in Australia. After being behind in the polls for years, the Government was returned with a small majority.

This was seen by most pundits as an important election, charting a course for Australia’s future. Christians seemed to be more active than in any previous election that I can recall. For some christians, the return of the Government was an unexpected triumph and even a miracle. For others, it was a defeat for their hopes, leading to despair.

Why most christians supported the government

The re-elected government is on the conservative side of politics, with some extremely right wing members who deny climate change, espouse conservative social values and tend to have hardline social welfare policies. Others in the party are more centrist.

The opposition tends to be more socially progressive and supporting greater equality.

In this election, the government introduced few new positive policies and its campaign was based on what it saw as the negative consequences of an opposition victory. It seems that most older christians supported the government based on fear:

A growing movement of progressive christians

But a significant change in this election was the number of more progressive christians who voted for the opposition because of a range of policies which they saw as being much more following the teachings of Jesus:

One important expression of this new mindset is Common Grace, a movement of Aussie christians “passionate about Jesus and justice” which focuses on four key justice areas of Justice for people seeking asylum, Aboriginal and Torres Strait Islander justice, Domestic and family violence, and Creation and climate justice. Common Grace sought to raise these issues in the christian community during this election (and previously)

How would Jesus vote?

Of course, I don’t know how Jesus would vote if he were a citizen of Australia, but his teachings give us a clue. Here’s my guess at how he would view the issues raised in this election:

My subjective conclusion is that in this election the government fell foul of Jesus’ teachings significantly more than the opposition did.

I find it particularly galling that our Prime Minister, well-known as a committed christian, would lead a party whose policies seem so contrary to Jesus’ teachings on wealth and human welfare, and build a campaign around fear and untruth.

Christians will never totally agree on how to vote. Even if we agree on which policies are ethical and beneficial, we’ll likely prioritise the issues differently.

But I feel disturbed that so many christians appear to have allowed fear, materialism and/or a narrow understanding of Jesus’ teachings to lead them to feel unconcerned about some glaring problems in Australia’s public life. Regardless of how they choose to vote, I would expect all christians, including our Prime Minister, to express genuine concern over the harm currently being done to the environment, asylum seekers, indigenous peoples and the poor.

Kohlberg says that fear and uncertainty tends to drive people back from a mature and outward-looking approach to a self-focused or tribal attitude. I feel concerned that many christians may have fallen into this trap this election.

And so, I was one of those christians who felt devastated when the government won the election on such an unchristian platform and attitude, more concerned than I have ever felt before about an election result.

Two responses to the election give me some hope:

Photo: Common Grace. Common Grace is a “diverse movement of Christians who are passionate about Jesus & justice”, set up in Australia just a few years ago to inform and advocate on four main justice issues – climate change, domestic violence, Aboriginal reconciliation, and asylum-seekers. We support Common Grace financially and by joining in events. Common Grace was active in the recent Australian election, advocating for a more just and less selfish vote by christians.