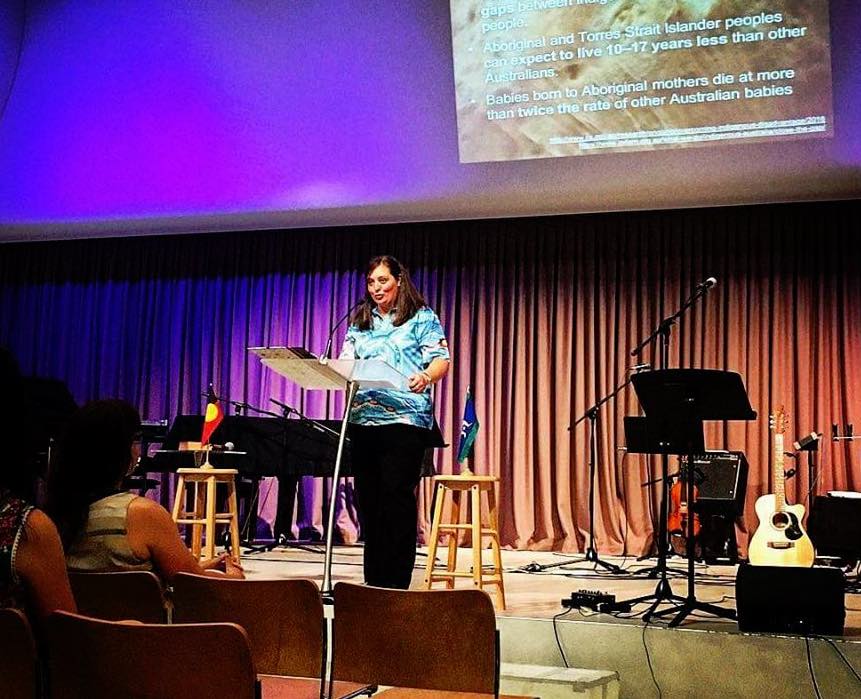 Last night we attended a service of lament and support for indigenous christians who cannot celebrate Australia Day with the rest of the country. The service highlighted issues that I think we all wish weren’t there, or would go away.

But maybe we all have some helpful lessons to learn.

A short short history of Australia

Archaeological and DNA information shows that when the first humans migrated out of Africa, one of the first “waves” travelled across south Asia, down through a land bridge that then existed across the Indonesian archipelago and into northern Australia. This was something like 65,000 years ago!

Since that time, these peoples spread across the whole land mass of Australia, which is about the same size as mainland USA and a little smaller than all Europe. By the time European explorers “discovered” Australia, there were more than half a million people in 300 “nations” and speaking 600 dialects, with complex laws, lore, dreaming stories and culture which allowed their way of life to survive all that time in what can often be a very harsh environment.

The first white settlers from Great Britain were transported convicts and their military guards, who settled in what is now Sydney, raising the flag in Sydney Cove on January 26, 1788. Free settlers followed, and gradually the nation of Australia grew via exploration and settlement to farm, mine and get timber.

It wasn’t all benign

The settlement wasn’t benign however. Some of the Aboriginal peoples around Syndey welcomed and cooperated with the invaders, but they were not really respected as fellow human beings. Others opposed the invaders, but spears were no match for muskets, and they were subdued and pushed out to the margins.

So much was history we were taught in school. But it has become apparent to all over the last 50 year that the Aboriginal people were badly treated and often murdered, sometimes apparently even being hunted for sport. A recent study identified more than 150 “massacre sites” along the east coast of Australia alone, with some individual incidents resulting in scores of deaths, the largest being 150 killed in a site in Victoria.

For decades Aboriginal people were denied the rights to be citizens equal with the white invaders, treated paternalistically, denied wage justice, and so much more. Only in 1967 were they given full recognition in law, and only in 1992 were their traditional rights to land recognised.

For many Aboriginal communities, the last century of “peace” has been as devastating as the frontier wars that came before. Statistics show that Aboriginal people suffer significant health problems that are mostly the result of white settlement – low life expectancy, higher than average rates of diseases like diabetes, high infant mortality, etc. Loss of land, traditional lifestyle and respect, and active discrimination, have led to depression, alcoholism, domestic violence and aimlessness in many communities.

The picture isn’t all bad. Many Aboriginal people have risen to prominent and respected positions in Government, law, academia, entertainment and sport. But overall, the treatment and current state of Australia’s indigenous people is a scandal.

One focus of Aboriginal attempts to “close the gap” is Australia Day, which they see, understandably, as “Invasion Day”. The day has become in recent years a celebration of Australia by the dominant white Australians, often in a somewhat jingoistic manner, but many Aboriginal people feel their noses are being (metaphorically) rubbed in the dirt. They want the date of Australia’s national day changed.

But many white Australians are unsympathetic. Why should we change, they ask, they should just get over it.

Never mind that no-one says the Jews should just “get over” the Holocaust (or no-one sensible, anyway), nor the Americans “get over” the World Trade Centre destruction. Somehow, this is seen as different, I don’t really know why, except, I guess, bloody-mindedness.

Common Grace is a “movement of Australian Christians seeking to live, speak and act more graciously, more compassionately, more like Jesus in today’s world”. It is an organisation we support.

Common Grace has been working towards justice in areas like Aboriginal reconciliation, climate change, humane treatment of refugees and domestic and family violence. Brooke Prentis, a young christian Aboriginal leader is the Common Grace spokesperson on Aboriginal matters.

And so last year, and again this year, Common Grace organised church services in the week preceding Australia Day, where indigenous and non-indigenous Australians could come together to lament the current inequalities and injustices, pray for positive change, stand together in solidarity and christian love, and support Aboriginal people into the future. The aim is not recriminations or guilt, but understanding and cooperation.

We attended one of these services last year, and again last night.

I find them emotionally challenging but uplifting. I cannot but admire the forgiving attitude of Aboriginal christians. They have lost a lot at our (white people’s) expense, but they are willing to share and move forward in friendship and without bitterness, if only they receive respect and support.

Some christians, including some I know well, are indifferent to all these issues. They either think we should be getting on with evangelism and not be concerned about justice (you have to wonder what Jesus they are following!), or they think all this is “political correctness”.

But no-one can reasonably deny that much injustice has been done, some of it even within my lifetime. Surely christians of all people should be willing to repent, even of the sins committed not by us but by our forebears, which we still benefit from in the shape of land ownership?

Surely we of all people should weep with those who weep and love our indigenous brothers and sisters?

I personally don’t care about the date of Australia Day, and changing the date wouldn’t change the evil that has been committed on the Aboriginal peoples. But if it is important to them, why wouldn’t I want to support them?

« Book review: Jesus Through Middle Eastern Eyes
Six things we might learn if we understood the mission of Jesus »