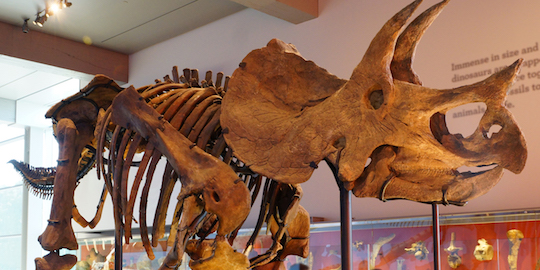 The biological theory of evolution has been the subject of argument ever since it was first proposed, especially from those christians who believe that the Bible teaches that the earth is not billions of years old, animals haven’t evolved from simple life forms, and thus evolutionary science must not only be wrong, but also evil. Other christians (including me) accept evolution as a scientific fact, even if some of the details are still doubtful.

In their eagerness, some creationist christians unfortunately make claims about evidence against evolution that don’t stand up. And, unfortunately, sometimes evolutionary scientists act unwisely too.

Here are a couple of cases in point …..

Mary is a molecular paleontologist who has been researching the proteins found in Tyrannosaurus rex bones for about 20 years. In 2005 she reported that she had been able to extract soft tissue (collagen) from some bones, something that surprised scientists because it was considered impossible for such proteins to survive anywhere near as long as the 68 million years since the dinosaur was alive.

Other scientists disputed her findings, but more recent research has confirmed her work. This has led to creationists claiming that her discoveries show that the earth is quite young after all, and contesting her explanation that the presence of iron has preserved the protein.

But the criticism hasn’t been all from the creationist side. Schweitzer is a committed christian who accepts the science of evolution, but has reported some scientists have questioned her results because of her faith. For example:

I had one reviewer tell me that he didn’t care what the data said, he knew that what I was finding wasn’t possible … . I wrote back and said, ‘Well what data would convince you?’ And he said, ‘None.’”

Mark Armitage was a university microscopist, expert in “scanning electron microscopy, transmission electron microscopy, confocal microscopy and tissue processing and sectioning” when he reported in a scientific paper in 2013 that he had found soft tissue in the horn of a 65 million year old Triceratops.

Mark is a creationist christian but he made no mention in the paper of any possible implications of his find. Nevertheless he believes that soft tissue is widespread in old bones and fossils, and cannot be explained except by a young earth. It has also been claimed that carbon dating showed the bone was much younger than you’d expect if evolution was true. I haven’t seen much scientific response to his report, but biologist Jerry Coyne says his claims are not credible.

Armitage discussed some of the implications with students and he was soon facing criticism. He reported that one university offical reacted by saying to him: “We are not going to tolerate your religion in this department!” and he was subsequently dismissed from the university.

Recently the university settled a case for wrongful dismissal out of court for a large sum. Although they claimed his dismissal was for budgetary reasons, the suspicion remains it was in response to his creationist views.

Creationists have taken up his evidence also, using it to “show” that the earth is much younger than science says, and evolution couldn’t be true.

We can learn lessons from this

It seems to me that both “sides” need to reconsider their approach in matters like these.

Evolutionists should surely to be wary of being as unscientific as the creationists they criticise. If a research report appears to present evidence against evolution, refusing to consider it seriously, or shooting the messenger because they are a christian, is neither scientific nor helpful. If the report is wrong or misleading, the correct response is to show this by careful science, not knee-jerk rejection.

Creationists must understand that one piece of adverse evidence doesn’t undermine evolution. Evolutionary science is based on a mountain of research results over more than a century, and it is foolish to suggest that one result will overturn that. Overstating claims may help other creationists feel good but they don’t advance truth – and in the long run they can disillusion younger christians and cause them to give up belief entirely. If evolution is ever to be shown to be wrong, it will be the result of slow and methodical research over many years.

Christians who accept evolution sit in the middle, being brothers an sisters to the creationists who they think are mistaken on this issue, and broadly agreeing with the scientists even while we may question their dismissiveness and sense of certainty. If we discuss the issues at all, we have a role to try to bring the two sides together – to show the non-believers that christian belief doesn’t necessarily lead to non-acceptance of the science of evolution, and to show believers, especially younger believers, that our faith (and truth) can encompass both christian belief and acceptance of evolution.

The correct response by both sides, surely, is to accept the research unless it is clearly incompetent, but make no immediate claims in support or against. Science proceeds by investigating anomalies and finding how they fit into the bigger scientific picture, and this takes time.

The time to be making pronouncements, either for or against evolution, is after the report has been verified or falsified by further research, and evidence-based explanations either found, or found to be difficult.

In the meantime, the soft tissue found in ancient bones apparently remains only partly explained at this stage. The research will go on, and more than likely lead to a full explanation.

« Quick reads for busy people
Did the Catholic church invent Jesus, write the gospels in the 4th century and suppress the truth? »