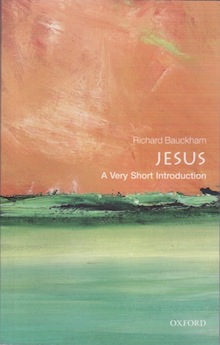 You wouldn’t even try to count the number of books written about Jesus. Most of them would have value, I guess, but some are long and scholarly, others lack a good historical basis.

But here’s one that is short, written by a respected historian and is encouraging to faith. What’s not to like?

It is the best introductory book about Jesus I have read. I think you’ll find it helpful and stimulating, and you’ll want to lend it out. Here’s why.

Richard Bauckham is a retired professor of New Testament. He has written many books, and his Jesus and the Eyewitnesses is an innovative classic. After a lifetime of study, teaching and writing, he knows the New Testament background and scholarship very well.

This book is one of almost 400 in the “Very Short Introduction” series published by Oxford University Press. At only 125 pages, and small enough to fit in your pocket, it lives up to its subtitle.

Bauckham has been able to cover pretty much everything you need to know about Jesus and explain it simply. Chapter headings are:

Bauckham outlines the conclusions of historians without explaining much of the alternative views (which would make it a very long introduction!). To cover all this territory, he has to adopt a viewpoint to steer his way through the disagreements among scholars.

He says upfront that he takes the view that the gospels are “substantially reliable sources”, recognising that many scholars would contest this view. But argues in chapter 2 why he thinks this is a reasonable conclusion (argued in much greater detail in Jesus and the Eyewitnesses).

Thus the reader gets a moderate scholarly view, avoiding the extremes of sceptical scholarship and devotion without much historical basis. This means, I think, that both believers and unbelievers can get a lot out of this book.

The main value of the book is as a concise summary of all that we may have learnt about Jesus from more detailed sources, but it still had many highlights for me:

If you want to enrich your understanding of Jesus with the insights of a leading scholar, or you want to help someone else do that, I recommend this book wholeheartedly. (Five stars)

« The shocking behaviour of God!
Jesus vs Paul? »